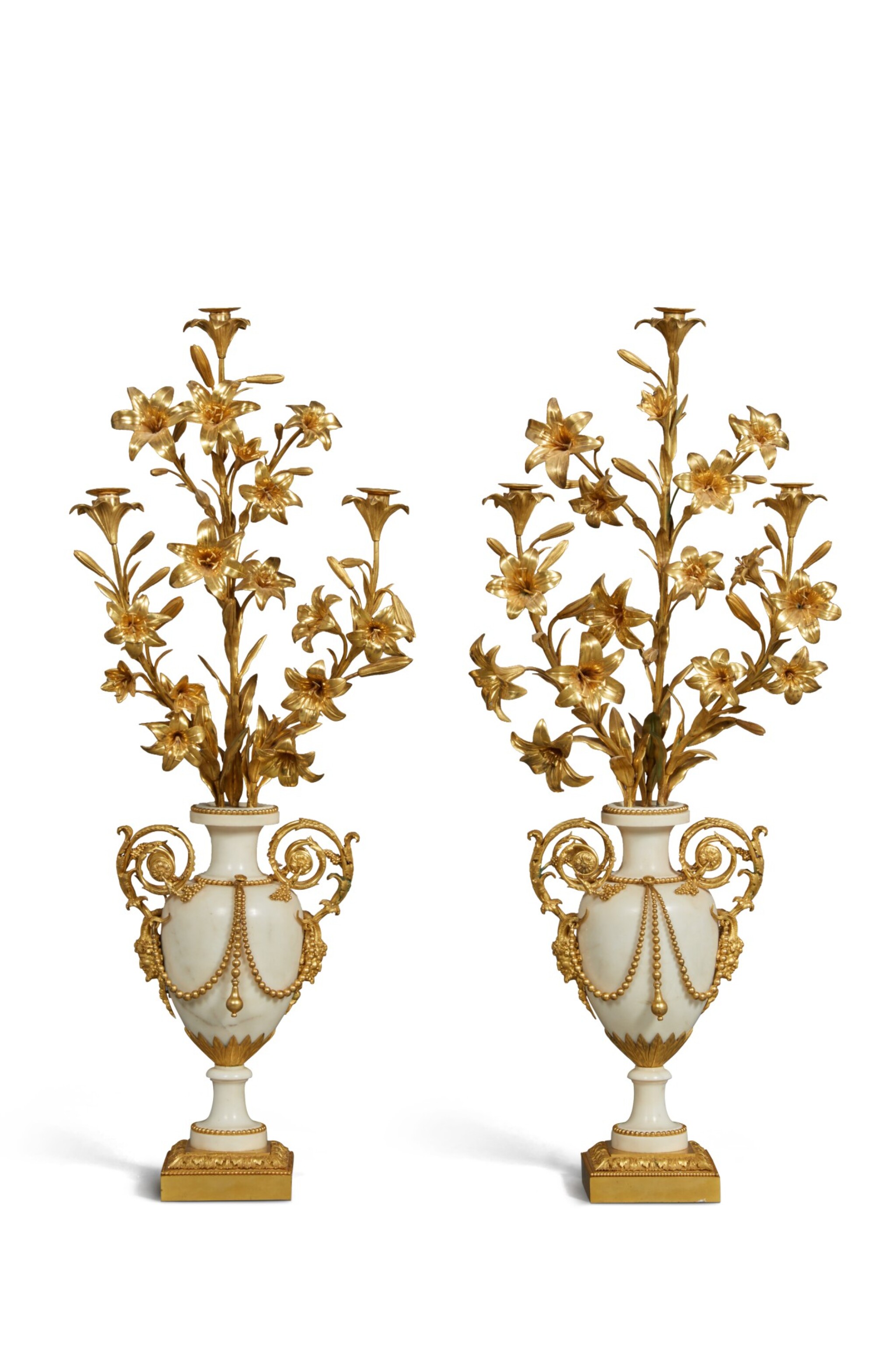 Two buds lacking at top; one blossom without stamens and a few stamens lacking in other blossoms; one base regilt. A few concentrated areas with minor verdigris. The marble with scattered minor surface scratches, marks, and some areas with infill and restorations.

Naturalistically cast lily blossom sprays began appearing in gilt bronze candelabra and wall lights by the early 1770s, and were disseminated through engraved designs such as plates 3 and 4 of Jean-François Forty's Oeuvres de Sculptures en bronze, contenant Girandoles, Flambeaux, Feux, Pendules, Bras, Cartels, Baromètres, et Lustres. The royal bronzier Pierre Gouthière is known to have supplied a pair of three lily branch wall lights to the King's favourite Madame du Barry, and in 1775 Horace Walpole remarked upon a visit to the Paris hotel of Madame de Mirepoix that her interior was illuminated by branches of gilt bronze lilies as 'loose and graceful' as those depicted by Guido Reni in his painting of the Annunciation. In addition to religious connotations and the evocation of purity, the lily was also an appealing design motif due to its association with the fleur de lis on the coat of arms of the French Monarchy.

The earliest models were conceived on a smaller scale as figural candelabra holding up lily stems, such as a pair with classical female figures now in the Warsaw Royal Castle, based on a drawing by the sculptor Falconet (illustrated in H. Ottomeyer and P. Pröschel, Vergoldete Bronzen, Munich 1986, vol.I, p.254, fig.4.7.3) or alternatively with three putti, in a design attributed to Jean-Louis Prieur, a version of which is in the Wallace Collection, London (F138-39). By the 1780s the design had evolved into a larger format of classical vases filled with sprays, seen in the offered lot and developed by bronziers like François Rémond and Pierre-Philippe Thomire (one example in the Musée Jacquemart André, Paris, is illustrated in Ottomeyer and Pröschel, p.259 fig.4.7.11). The most monumental expression of this model is a pair of goût grec vases with ram's heads fashioned as an athénienne with oversized lily boughs standing over five feet (1.5 metres) tall, a pair of which was in the collection of Baron Guy de Rothschild at the château de Ferrières, sold Sotheby's Monaco 3 December 1994, lot 83, and another pair offered Sotheby's New York, 3 June 2008, lot 43.