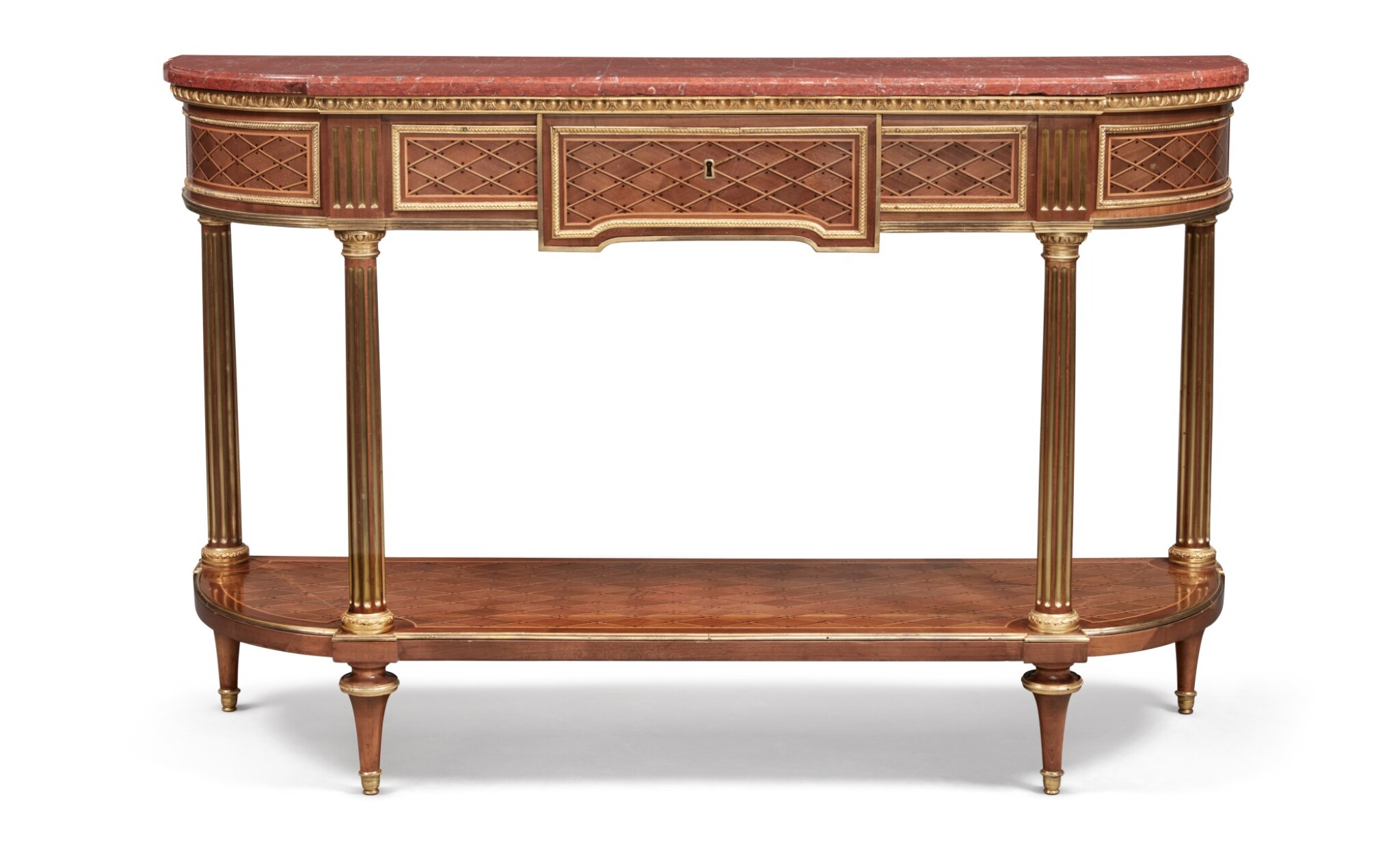 with a Belgian griotte marble top; previously with a central shelf and brass gallery along lower shelf

Overall in good conserved condition. Replacement to section of bronze moulding along lower edge of frieze proper left; redundant screw hole on proper right internal side of drawer recess. Replacements to veneer along front and sides of lower shelf, and typical age cracks along shelf panel with some old areas of infill. Ormolu collars to feet and columns somewhat loose; circular punch marks on underside of shelf adjacent to rear feet; possible repair to rear of apron panel on central drawer tablet. One strip of brass fluting on the proper left front column detached but present; this is very easily re-glued. Marble top with a few typical chips, scratches, and old repairs, particularly along back edge.

The console desserte appeared in the later Louis XVI period as part of a trend towards developing new types of dining room furniture, partially inspired by the Anglomanie fashion for English-influenced designs in the decorative arts, which had received a boost with the 1786 Eden free-trade agreement between Paris and London.

Like Ancellet, Weisweiler occasionally produced case furniture veneered with similar 'dot and trellis' parquetry, such as a secrétaire à abattant illustrated in A. Pradère, French Furniture Makers: The Art of the Ébéniste from Louis XIV to the Revolution, Paris 1989, p.395 fig.484. This distinctive lozenge inlay design had already been introduced a decade earlier by cabinetmakers such as Roger Vandercruse, called R. Lacroix or RVLC (maître in 1755) and Martin Carlin (maître in 1766). In the mid-1780s Jean-Henri Riesener (maître in 1768) also introduced a similar trellis parquetry design but without the dots, referred to in contemporary documents as satiné gris, that appears notably on the furniture Riesener supplied the Queen for her apartments at the Tuileries Palace in 1784 including a rolltop desk now in the Louvre (OA 5226) and a table de toilette now in the Petit Trianon (D. Meyer, Le mobilier de Versailles, Dijon 2002, Vol.I no.63). Riesener also used satiné gris on a series of consoles dessertes, comprising an example formerly in the collection of Kathleen and Martin Field, sold Sotheby's New York, 20 October 2018, lot 1112, and another from the Dimitri Mavrommatis collection sold Sotheby's London, 8 July 2008, lot 46.

The outstanding collection of 18th Century French Furniture formed by Sir Charles Mills, Bt. (1792-1872), and expanded by his son, the 1st Lord Hillingdon (1830-1898), was one of the finest gathered in England in the 19th century. It included the largest group of Sèvres porcelain-mounted Louis XV and Louis XVI case furniture ever assembled, seventeen pieces of which were sold in 1936 and are now in the Metropolitan Museum, New York.