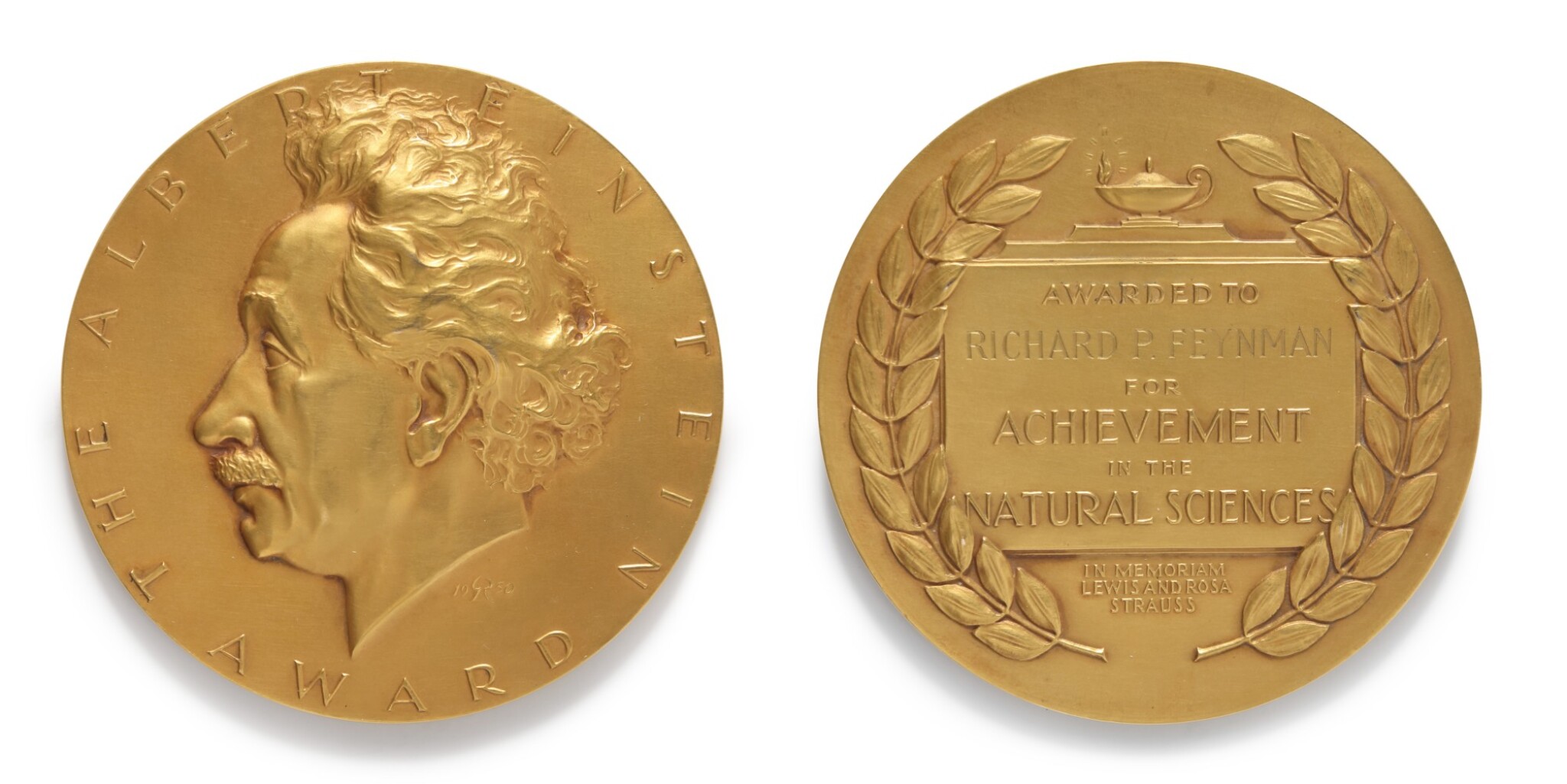 1954 Albert Einstein Award Medal, struck in 10 carat gold, designed by sculptor Gilroy Roberts (ninth Chief Engraver of the US Mint, and designer of the Kennedy Half Dollar) and struck by the Medallic Art Company (producers of the Pulitzer Prize, the Peabody Award, the Newberry and Caldecott medals, and the Inaugural medals for 11 US Presidents). Obverse with bust of Albert Einstein left, encircled at edge by, THE ALBERT EINSTEIN AWARD. Central tablet on reverse incused with, AWARDED TO / RICHARD P. FEYNMAN / FOR / ACHIEVEMENT / IN THE / NATURAL SCIENCES, below, incuse  IN MEMORIAM / LEWIS AND ROSA / STRAUSS, tablet framed by laurels, and topped with oil lamp; the edge marked MEDALLIC ART CO. N.Y. 10K; weight 201 g.; diameter: 76 mm (3 in.). Housed in the original black pebbled morocco case, "Metallic Art Co. NY" in gilt to underside, interior lined with navy blue satin and velvet.

TOGETHER WITH: 1960 Albert Einstein Commemorative Award medal, struck in bronze by the Medallic Art Company, obverse with bust of Albert Einstein right, encircled at edge by, ALBERT EINSTEIN COMMEMORATIVE AWARD. Central tablet on reverse incused with, IN SCIENCE / RICHARD PHILLIPS FEYNMAN/ above FOR ACHIEVEMENT/ below, incuse  AWARDED BY / YESHIVA UNIVERSITY/ IN BEHALF OF THE/ ALBERT EINSTEIN/ COLLEGE OF MEDICINE/, tablet framed by laurels, and with arms of Yeshiva University; the edge marked MEDALLIC ART CO. N.Y. Bronze. Housed in the original velvet-lined leather case.

THE 1954 ALBERT EINSTEIN AWARD MEDAL AWARDED TO RICHARD FEYNMAN — AN AWARD FAR MORE EXCLUSIVE THAN THE NOBEL, PRESENTED TO AMERICA'S GREATEST PHYSICIST AND ONE OF THE MOST BELOVED SCIENTISTS OF ALL TIME

“I don’t like honors. I appreciate it for the work that I did and I know that there’s a lot of physicists who use my work. I don’t need anything else… I’ve already got the prize: the prize is the pleasure of finding the thing out…” (Sykes, No Ordinary Genius, p. 82).

The award was established by Lewis L. Strauss, one of the first five commissioners of the Atomic Energy Commission (AEC), and the driving force behind the controversial Oppenheimer Security Hearings, which resulted in Oppenheimer’s security clearance being revoked. As a result, Strauss has often been looked upon as a bit of a villain, especially amongst those, like Richard Feynman, who worked with and admired Oppenheimer.

As Gleick recounts in his excellent biography of Feynman, Genius, this was the first major award to be bestowed upon Feynman, and he was only the third recipient (The first award, given in 1951 was shared by the brilliant mathematician and logician Kurt Gödel, and Julian Schwinger, with whom Feynman in turn shared the 1965 Nobel Prize in Physics, along with Sin-Itiro Tomonaga). The award was publicly announced by Oppenheimer, who was at the time director of the Institute for Advanced Study, and under whom Feynman had worked at Los Alamos on the Manhattan Project. Feynman was apparently happy when he first learned he had been awarded the prize. He famously exclaimed “Hot dog!” when Strauss called to inform him, and wrote his mother about it, "'I thought you would be happy that I beat Schwinger out at last, but it turns out he got the thing 3 years ago. Of course, he only got 1/2 a medal, so I guess you'll be happy. You always compare me to Schwinger." (Gleick, pp 378-79)

When Feynman realized that the Strauss who called to inform him was the same Strauss behind Oppenheimer’s demise, he became reluctant to accept the award. It was fellow physicist (and winner of the 1944 Nobel Prize in physics) Isidore Rabi, who convinced Feynman to accept, saying “You should never turn a man’s generosity as a sword against him.” (Gleick, p. 296) Feynman had felt a certain ambivalence against awards ever since he was a child, and this would continue throughout his life; he was famously annoyed at having won the Nobel, and had to be convinced by his wife Gwyneth to accept.

After Lewis L. Strauss’ death in 1974, the officers of the Lewis & Rose Strauss Memorial Fund decided to stop offering the award. In 1977 however, the work of an English theoretical physicist came to the attention of the officers, and so Lewis H. Strauss wrote Feynman to seek his opinion on the matter: “…We have taken note of the work of Dr. Stephen Hawking of Cambridge University who appears to have made major theoretical strides in the areas where Einstein labored so long. Do you think that Hawking’s work is of sufficient importance to justify the Einstein award?... Is there anyone else whose name comes to your mind as more worthy?” Feynman sent his response a week later, agreeing that Hawking’s work was deserving of the Einstein Award, and Hawking become the award’s final recipient in 1978. (Michelle Feynman, ed. Perfectly Reasonable Deviations From the Beaten Track. The Letters of Richard P. Feynman. pp 313-14.)