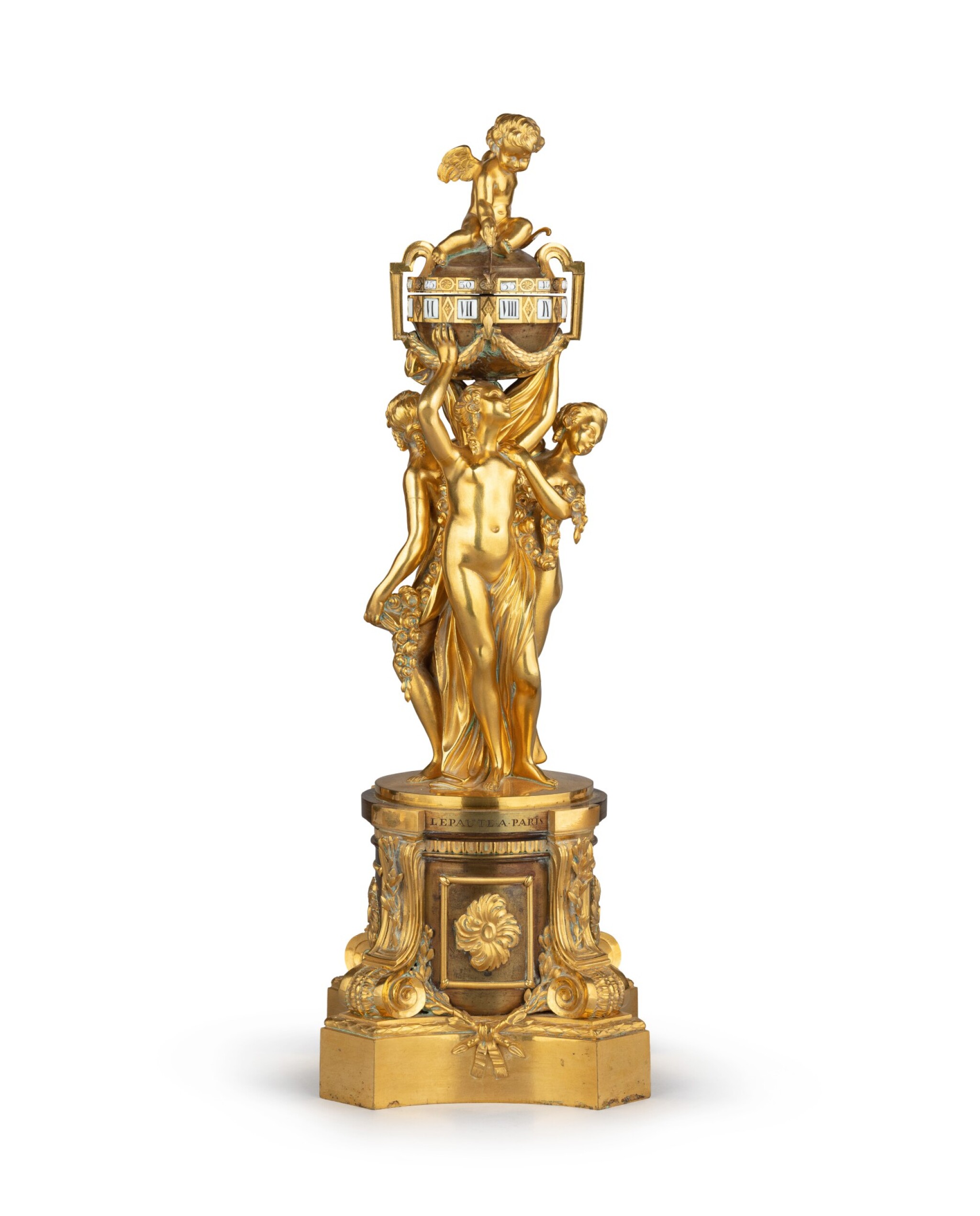 modelled with The Three Graces supporting a globe mounted with the hour and minute rings each with enamel cartouche numerals, surmounted by Cupid seated and indicating the time with an arrow, the movement contained within the plinth base with scroll corners, signed LEPAUTE A PARIS and VION to base

The illustrations are accurate. Good overall condition despite the inevitable minor dents and scratches due to age and use. The gilding is tarnished and rubbed. Some traces of cleaning products. The brown patina could benefit of a proper cleaning. A few minor chips to the enamel of the dial. The rewind key is missing. Please note that we do not guarantee the working condition of the mechanism.

To request a Condition Report for this lot, please contact Louis-Xavier.Joseph@sothebys.com

When acquired and thence by descent.

This clock is result of the successful partnership of two outstanding Parisian workshops, the clockmakers Lepaute, horlogers du roi, and Francois Vion, one of the leading bronzier of his time. Its design was described in the 18th century as 'Le temps qui passe entre l'amour et les Grâces', believed to have been created by Vion. and is reproduced in a coeval album of designs now conserved in the Bibliothèque Doucet, Paris (VI E 15, Rés.fol.20/1; illustrated in Ottomeyer, Vergoldete Bronzen, 1986, vol. I, p.179, ill.3.7.4)

An identical clock at the was purchased by General Moreau; subsequently acquired by the garde-meuble following its arrived at Fontainebleau, it was recorded in the appartements of Général Moreau in 1804 (J.-P. Samoyault, Le Mobilier du Général Moreau, Paris, 1992, p.42, fig.33).

Other clocks of this model are conserved in the

Another example, from the Duques de Cadaval collection, was sold Christie's London, 14 March 1996, lot 148 (£41,800) and one other, which belonged to Hyppolite-Michel Gigault de Crisenoy in the early 19th century was sold with Christies New York, Magnificent French Furniture, 2nd November 2000, lot 2 ($98,000).