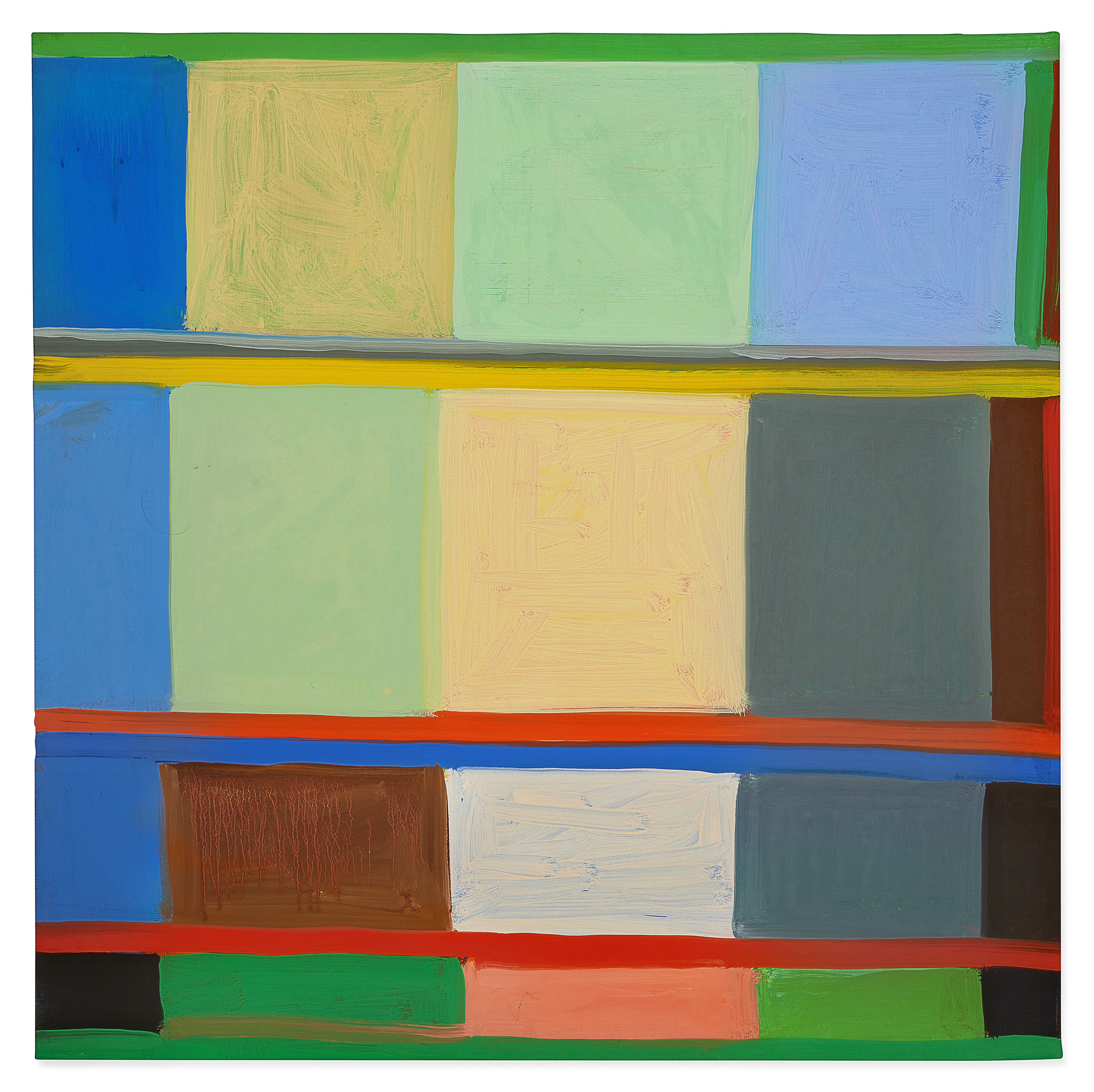 signed, titled and dated Aug. 2006 on the reverse

This work is in very good condition overall. There are tonal and textural variations to the surface, including scattered areas of stray media, inherent to the artist's chosen media and working method. There is some very minor evidence of handling wear to the extreme turning edges and corners, visible upon close inspection. Under ultraviolet light, there is no evidence of restoration. Unframed.

Executed in 2006, Cool Breeze belongs to Stanley Whitney’s highly celebrated series of color grid paintings, which simultaneously embrace the freedom of color and the order of the grid. This series, which has been widely exhibited, including at Documenta 14 in Kassel and Athens (2017), represents the culmination of Whitney’s life-long exploration of color. Since the 1990s, Whitney has committed himself to exploring this same compositional motif; however, this decision has in no way limited Whitney as an artist. On the contrary, it has unlocked a limitless realm of possibilities, an infinite world of color.

The grid as an organizational structure tends to eliminate individual choice insofar as it regiments and confines. However, there is no such rigidity in Whitney’s compositions. In fact, a grid of color seems to be an oxymoron. How can a grid be both free and ordered, colorful and lifeless? Whitney speaks of this paradox:

“I never think about the structure as a grid—though it is a grid, really. I’m a real New York City painter, if you know what I mean. My paintings are just the way New York is. I want that kind of simplicity, which is also the madness of New York, because of the color. So you have this contradiction, in a sense. There’s the grid, which should be very orderly, and then you put the color, and it throws the whole thing off.”[1]

The structure of Whitney’s compositions and his reference to New York recall Piet Mondrian’s work, specifically Broadway Boogie Woogie (1942-43). In this painting, Mondrian’s grid captures the energy and rhythm of modern life in New York, just like Whitney’s paintings. Although he acknowledges that his compositions are grids of a kind, it is important to consider that Whitney never thinks of his paintings in this way. A grid implies compartmentalization, the isolation of its elements; however, in Whitney’s paintings, the blocks of color bleed into each other ­— they jostle against each other like pedestrians on a crowded sidewalk. We might then be better off thinking of Whitney’s compositions not as grids, but perhaps as crossroads of color. In his work, there is a kind of crossing over, an exchange, a call and response that takes place between the colorful blocks.

Mondrian’s reference to boogie-woogie music in Broadway Boogie Woogie also parallels Whitney’s own engagement with jazz. Both artists embrace the musicality of color and the rhythm of composition. Whitney, a life-long lover of jazz, often titles his paintings after his favorite jazz tracks or musicians. The current work’s title, Cool Breeze, is no exception, since it references Dizzy Gillespie’s song of the same name. Whitney says that “Painting, for me, is like music. It really is like call and response. A color calls another color.”[2] For Whitney, who describes his approach to color as intuitive, painting becomes a kind of musical improvisation in the style of Dizzy Gillespie. The varied application of paint throughout a painting like Cool Breeze testifies to this improvisational spirit as the paint becomes Whitney’s instrument. Just like when listening to Gillespie’s music, when looking at Whitney’s Cool Breeze, the viewer is led through a dynamic composition in color, that is full of surprises and visual interest. The interplay between the vertically stacked blocks and the intersecting horizontals establishes a spirited tempo that keeps us on our toes as viewers. Whitney describes, “I wanted something as open as Pollock but as structured as Mondrian.”[3] In this way, the grid comes to life through Whitney’s improvisation. His grids are never familiar or repetitive; each painting is a completely new riff on an old theme.

Beyond music, Whitney also draws inspiration from the architecture of Italy and Egypt, which he experienced for the first time in the ‘90s when living in Italy. In fact, Whitney painted Cool Breeze in Italy, where he and his wife (fellow painter Marina Adams) keep a studio near Parma. Whitney describes his pivotal experience with Egyptian architecture:

“I looked at the pyramids and found the last missing piece of my puzzle—it was density … I bet I can just stick these colors right next to each other instead of having them on a field. I didn’t know at that point that the space was in the color. I kept thinking the space was around, and the color was all in the space. But when I put the colors directly next to each other, I realized that I don’t lose the air.”[4]

Although architecture, particularly structures like the pyramids, tends to convey an unbelievable sense of weight, when Whitney incorporates architecture into his practice, his stacks remain weightless. Despite the ‘density’ of the blocks in Cool Breeze, which seem to be compressing almost like an accordion, this compression does not at all suggest gravity or the weight of these blocks. These pillars of color transcend their own weight. Whitney’s brilliant realization was that “the space was in the color” and not the other way around. Instead of having weight in space, color is immaterial as space itself. For Whitney, color, as the fabric of the universe, is a kind of infinity. There is a certain ‘airiness’ in Whitney’s compositions, which he seems to allude to in the current work’s title, Cool Breeze. In this way, the ‘compression’ of the stacks in Cool Breeze is not at all suffocating. Instead, we sense that the painting, as it pulsates, is compressing and expanding as if the color itself were breathing.