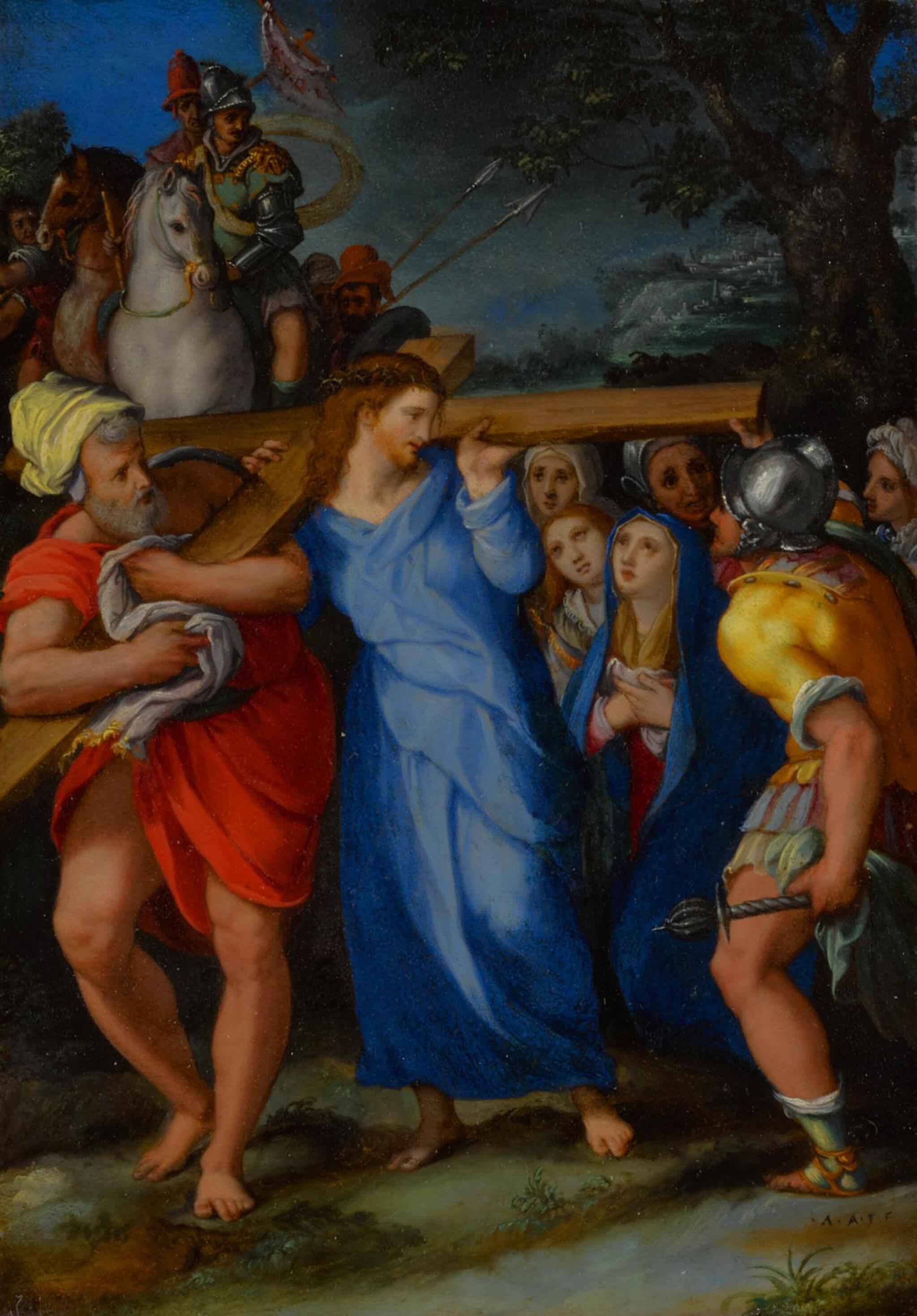 Anonymous sale, London, Sotheby's, 19 April 1989, lot 7;
There acquired by Richard L. Feigen.
S. Lecchini Giovannoni, Alessandro Allori, Turin 1991, p. 296, cat. no. 167, reproduced fig. 392;
L. Kanter and J. Marciari, Italian Paintings from the Richard L. Feigen Collection, New Haven 2010, pp. 122, 125-126, cat. no. 38, reproduced in color, p. 127.
New Haven, Yale University Art Gallery, Italian Paintings from the Richard L. Feigen Collection, 28 May – 12 September 2010, no. 38;
Williamstown, MA, Sterling and Francine Clark Art Institute, March 2014 - August 2020 (long term loan).
Alessandro Allori began painting mythological and religious scenes on copper in the late 1560s, around the time that he worked on the paintings on slate for the studiolo of Francesco I de Medici. Like slate, the copper support emphasizes the bold, saturated color palette and porcelain skin tones popular in Florentine painting of the mid-to-late cinquecento. Many of Allori’s devotional scenes on copper are reduced versions of larger altarpieces, no doubt requested by patrons and appreciated by connoisseurs. Yet John Marciari (see Literature) has recently argued that the present copper is not a reduced version of a larger painting of the same subject, as previously assumed, but rather a first treatment of the subject that was later expanded. Though undated, the present example is signed A.A.F.F., which stands for “Alexander Allorius Florentinus faciebat.” The central focus, clear narrative, naturalism and bright colors are all characteristic of Allori’s approach to religious art in the Catholic Counter-Reformation.

Another version of the same subject, signed and dated 1604, is now in the Galleria Doria-Pamphilj, Rome. Though it is not a large painting, the figures are proportionally smaller and less centrally focused than in the present lot. Marciari points out that the Feigen copper has more similarities with Allori’s design for a tapestry of the same subject completed as part of a Passion series between 1591 - 1602. The cartoon and preparatory drawings no longer survive, but the tapestry executed after Allori’s design for Christ Carrying the Cross is now in the Palazzo Pitti, Florence. The tapestry, like the Doria-Pamphilj painting, has more figures and is more elaborate than the smaller copper, but the figure of Simon of Cyrene, to the right of Christ in the tapestry, strikes a nearly identical pose in the Feigen painting: his right leg is bent rather than extended (as it is in the Rome painting). This suggests that this intimate copper, with its more focused composition, was in fact created in the first half of the 1590s, while Allori was working out designs for the tapestry, and before he expanded the composition for the 1604 painting. Marciari also notes that Simon of Cyrene resembles the figure of Lazarus in Allori’s Resurrection of Lazarus in Montepulciano, which is signed and dated 1593. That connection is relevant because Allori often repeated poses and figure types in paintings created around the same time.