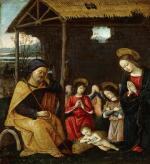 oil on panel, heightened with gold

Bernardino di Betto, called Pinturicchio (so-called because of his small stature), was one of the leading painters in Umbria during the second half of the 15th century and into the early 16th century. A contemporary of Perugino, with whom he collaborated from 1481-1482 on frescoes for the Sistine Chapel in Rome, Pinturicchio quickly established his reputation throughout Umbria, where his lively and poetic style as well as his rich color palette were celebrated among an elite clientele, including personalities such as Cardinal Domenico della Rovere and later the Borgia Pope Alexander VI. Despite his considerable activity as a painter of large-scale altarpieces and frescoed cycles in and around Rome and his native Perugia, he also painted a number of small devotional works, of which the present Nativity is a fine example. A late work by the artist, it was likely painted in Siena where he lived for the last decade of his life from about 1504-1513 and where he worked primarily for the illustrious Piccolomini family, namely Cardinal Francesco Todeschini Piccolomini, later Pope Pius III, and his brother Andrea di Nanni Piccolomini.

Smaller, detailed works such as this Nativity were a specialty of Pinturicchio’s in the last years of his career. Here, his delicate and lyrical hand has captured a peaceful scene enlivened by rich colors and gold details. A luminous figure of the Christ Child appears in the center of the lower foreground, reclined on a plush bale of hay. To His right appears the Virgin, whose red robe and blue mantel provides a pleasing balance to the warm tones of the yellow fabrics adorning the seated Joseph. Gazing down upon the Christ Child in similarly devotional poses are two angels, one of whose wings have been rendered with a delicate gradation of color. Equally delicate is the beautiful landscape with water and rolling hills that appears in the distance.

We are grateful to Professor Filippo Todini for endorsing the attribution to Pinturicchio the basis of photographs. He dates the work to about 1501, around the time of the frescoes of Santa Maria Maggiore a Spello, or shortly after.