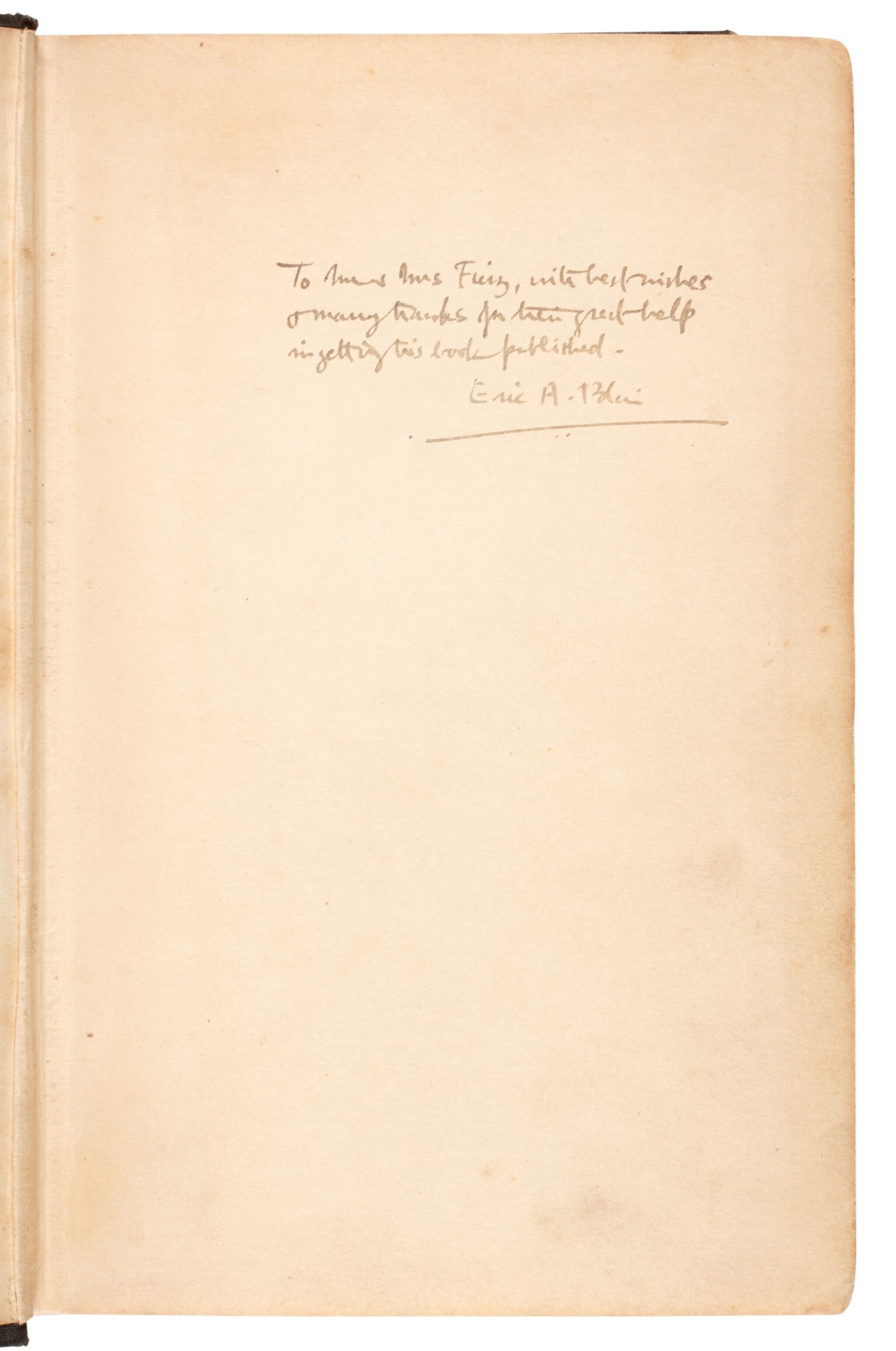 Down and Out in Paris and London. London: Victor Gollancz, 1933

FIRST EDITION, INSCRIBED TO MABEL FIERZ on the front free endpapers ("To Mrs Fierz, with best wishes & many thanks for her great help in getting this book published. Eric A. Blair"), 8vo, half-title, with a pencil note on p.275, presumably in the hand of Fierz, disputing his claim that "unemployment affects women less than men", original black cloth, spotting, wear to spine edges and corners

ORWELL'S FIRST BOOK, INSCRIBED TO THE LOVER WHO WAS INSTRUMENTAL IN GETTING THE BOOK INTO PRINT. Mabel Sinclair Fierz met Eric Blair in 1930 on holiday in Southwold. Born in Brazil to an expatriate industrialist family, she was the wife of Francis Fierz, an executive in a steel manufacturing firm with keen literary interests, who wrote occasional reviews for the Adelphi. Eric Blair was an aspiring writer who was back living with his parents at their Suffolk home, having resigned from his post in the Imperial Police in Burma, endeavoured to understand poverty by living as a tramp in England, and spending time as a penniless bohemian writer in Paris. Meeting Mabel Fierz was to prove transformative for the young writer. With the support of her husband, she became his key supporter and patron. She invited to stay at her home in North London when he was visiting London, helped him to find a teaching job in 1932, smuggled him a copy of Ulysses from Antwerp, and got him his flat in Parliament Hill in 1935. The two also had an affair that lasted about a year.

Above all, however, Mabel Fierz played a crucial role in ensuring that Down and Out found a publisher. Blair abandoned the manuscript at Fierz's house after it had been rejected by both Jonathan Cape and Faber & Faber, telling her to throw it away but keep the paperclips, or do with it what she liked. Fierz took the manuscript to the literary agent Leonard Moore and, by sheer force of her considerable will, persuaded him to take it on. Blair wrote to Moore on 26 April 1932, apparently in some surprise: "I left the ms you have with Mrs Sinclair Fierz and asked her to throw it away, but I suppose she sent it to you instead." Blair agreed that Moore could act as his agent, and simply asked that if he found a publisher then the book be published pseudonymously. Moore saw that the manuscript was likely to fit the ambitious and radical list of Victor Gollancz. Down and Out in Paris and London, with the author's newly minted name of "George Orwell", was published by Gollancz on 9 January 1933.

INSCRIBED COPIES OF ORWELL'S FIRST BOOK ARE EXCEPTIONALLY RARE ON THE OPEN MARKET. Only two inscribed copies to have sold at auction in recent decades: the copy belonging to his agent Leonard Moore, and a copy presented to another Southwold friend, Herbert Dennis Collings. See also lot 114.