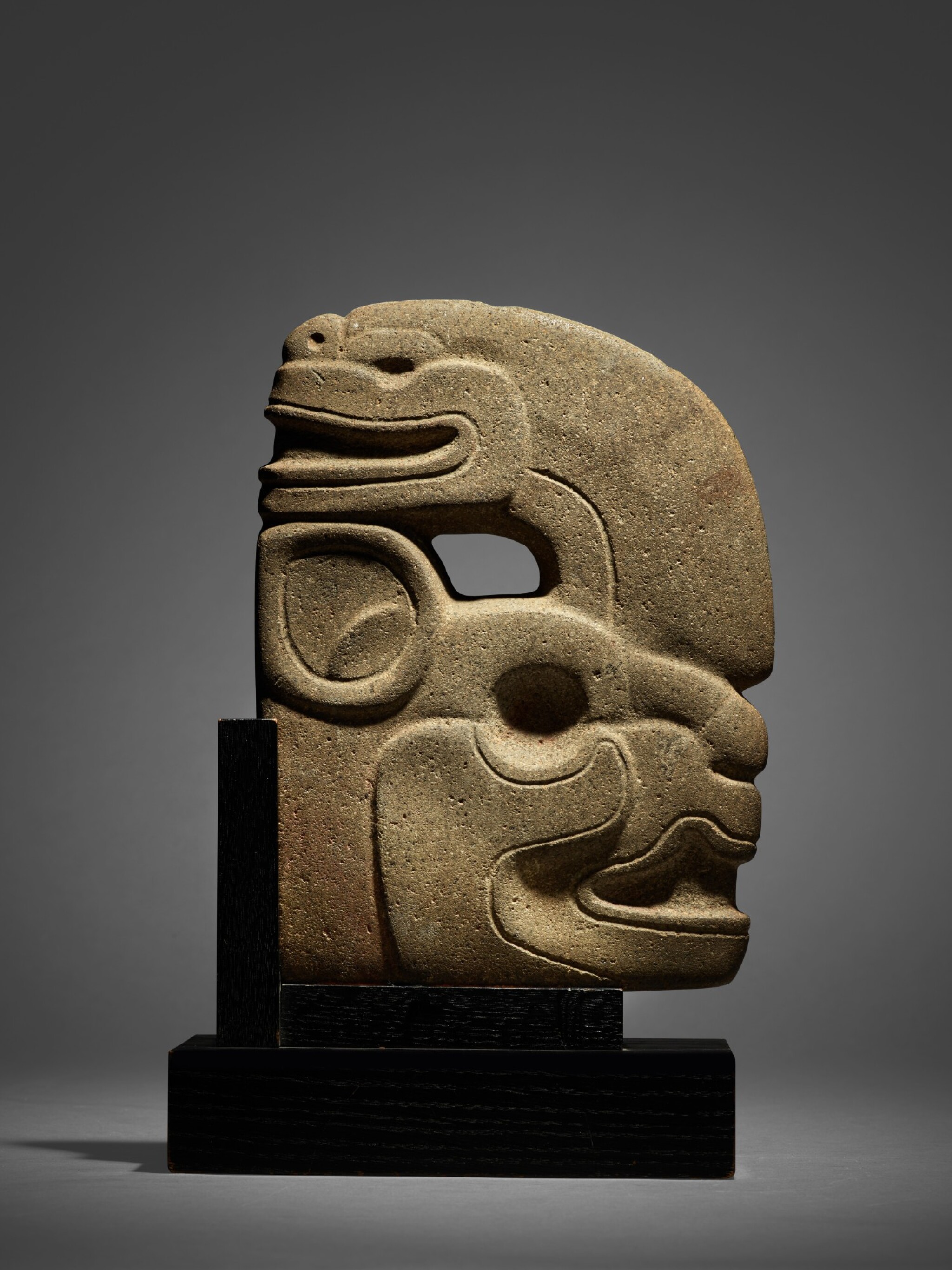 The Mesoamerican ballgame is among the most important and enduring cultural features of the Pre-Columbian world, and its accompanying accoutrements of yokes, hachas, and palmas comprise one of the most important categories of stone sculpture.

The objects known as hachas, the Spanish word for “axes”, were originally named for their tapering form’s supposed resemblance to large stone axe heads. Like yokes and palmas, these enigmatic stone artifacts probably represent ritual effigies of actual ballgame equipment that was probably made of lighter and more perishable materials. These ceremonial objects in stone were evidently of high value, but many questions remain around the context in which they were originally used. Recently it has been suggested that “some of the objects that have grouped under the label hacha may well be markers or trophies representing teams or individual players, which were placed on the sides of the ballcourts on certain occasions.” (Helmke, Yaeger, and Eli, “A Figurative Hacha from Buenavista del Cayo, Belize”, The PARI Journal, Vol. 18, No. 3, 2018, p. 15).

Some indications of how hachas were used in the ballgame itself may be discerned from depictions of ballplayers, such as “Toniná Monument 171”, a stone relief sculpture from the Maya site of Toniná, now in the Museo Nacional de Antropología, Mexico City. The sculpture depicts two players, either side of an enormous ball. One contestant stares at his opponent and leans forward to strike the ball with his hacha, which projects from the front of his yoke. The second player, seemingly intently focused on the ball, also wears a yoke and hacha, which is “rendered frontally and thereby seen as a narrow blade along the sternum”, perhaps suggesting that the hacha also had a protective function (Helmke, Yaeger, and Eli, “A Figurative Hacha from Buenavista del Cayo, Belize”, The PARI Journal, Vol. 18, No. 3, 2018, p. 20). This iconography also corresponds with that of a highly dignified Jaina figure of a ballplayer wearing a yoke with an attached bird-head hacha, now in the Yale University Art Gallery, New Haven (inv. no. 1973.88.13; illustrated in E. Michael Whittington, ed., The Sport of Life and Death: The Mesoamerican Ballgame, New York, 2001, p. 227, cat. no. 100).

In Secrets in Stone, their comprehensive study of yokes, hachas, and palmas from southern Mesoamerica, Edwin M. Shook and Elayne Marquis identify a corpus of 23 hachas that have a bat as their primary motif (Edwin M. Shook and Elayne Marquis, Secrets in Stone: Yokes, Hachas and Palmas from Southern Mesoamerica, Philadelphia, 1996, pp. 77-84). The bat was an animal with a rich variety of associations. S. Jeffrey K. Wilkerson notes that it was “associated with night, darkness, thunderstorms, the evening star (Venus), and decapitation. All are themes of the ball game ritual and the underworld […]. Bats are associated with the five-part Venus cycle and the mythological confrontation of the ball-playing hero twins with the gods of the underworld in the legends recounted in the Popol Vuh […]” (S. Jeffrey K. Wilkerson, “Art of the Gulf Lowlands”, in Susan Toby Evans, ed., Ancient Mexican Art at Dumbarton Oaks, Washington, D.C., 2010, p. 246).

The bold and assured carving of the present hacha illustrates several features that are particularly distinctive to hachas depicting bats. These include the large, pricked, ears, the depiction of the tragus, the fleshy form at the lower part of the ear, and the perforation in the upper half, which Shook and Marquis note “seldom occurs on specimens in other categories” (Edwin M. Shook and Elayne Marquis, op. cit., p. 77). Interestingly, this perforation is present on almost every hacha from the great Mayan city state of Palenque (ibid.).

Although illustrating features distinctive to a bat, something in the powerful physiognomy of this hacha seems to suggest a snarling jaguar. This hacha differs from most depictions of jaguars in hachas – although the fleshy snout suggests the big cat more than the bat – but Shook and Marquis note the resemblance, and state that “perhaps bat/jaguar/serpent would more accurately describe this representation.” (ibid., p. 80). The serpent, which here arches up from the bat’s snout, its slithering head atop the bat’s ear, was a creature with “important mythological connotations, and often associated with water and rain.” (ibid., p. 171). Hachas with secondary representations are rare; for other examples see the hacha of a parrot head with a small human head in its beak, and the head of a serpent above, in the St Louis Art Museum (inv. no. 256:1978), and the widely published hacha of a vulture atop a human skull, Museo Nacional de Arqueología y Etnología, Guatemala City (inv. no. 2203).