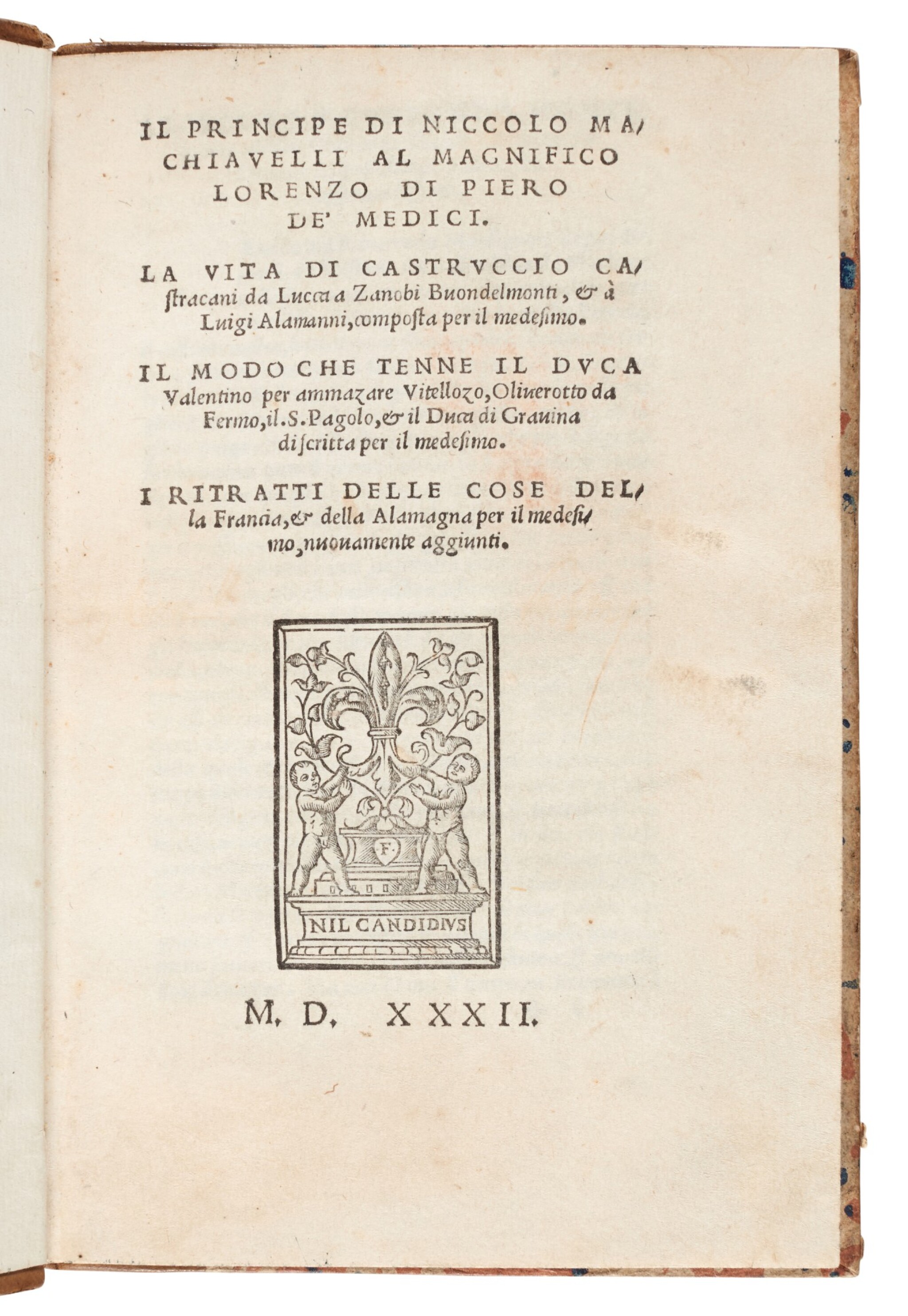 THE FOUNDATION OF MODERN POLITICAL PHILOSOPHY AND THE SOURCE OF "MACHIAVELLIANISM". SECOND EDITION of Machiavelli's notorious masterpiece, printed only a few months after the first edition of Antonio Blado in Rome in January, and the first Florentine edition. Machiavelli's Prince circulated in manuscript from its probable completion in 1513, after he had been dismissed and imprisoned by the Medici on their return to power in Florence, until it was first printed in 1532, five years after Machiavelli's death. Ironically this was just after the Medici had taken full control of Florence in the wake of Florence's surrender to Charles V's forces in 1530; the Republic of Florence was at an end.

In 1516 Machiavelli dedicated his treatise to Lorenzo de' Medici, the nephew of Pope Leo X, whom Leo had just created Duke of Urbino. Machiavelli saw the Medici as having the potential to create a new Italian state, in the wake of Cesare Borgia's failure to do just that, now that the same family ruled both Rome and Florence. The endless wars in Italy during the previous decades could be brought to a close if the Medici took appropriate action. Leo X was already pursuing this idea with the appointment of Lorenzo as Duke of Urbino in a dynastic and territorial expansion of Medici power with which to halt foreign invasions.

In his preface to this edition, Bernardo Giunta defends the text of Machiavelli against its detractors, who were already numerous despite the relatively limited circulation of the text in manuscript. He claims that the text contains both the poison of tyranny and its remedy, much as the Latin translation printed in Montbéliard was accompanied by an anti-Machiavellian text (see lot 170) as a counterbalance.

This edition contains other works by Machiavelli, notably his account of Cesare Borgia's assassination of his disloyal henchmen Vitelozzo and Oliverotto; Machiavelli had been present at their execution in December 1503 during his legation to Cesare. There is also the life of the fourteenth-century condottiere Castruccio Castracani of Lucca (1520), and an account of affairs in France and Germany (1510-1511). These works are all complementary to Machiavelli's theme of the appropriate or necessary behaviour of a prince.

Hvedholm Castle, on Funen in central Denmark, was owned by the Brahe family (later Bille-Brahe) from the sixteenth century to the early twentieth century. The first translation of Machiavelli into Danish was not until 1876.