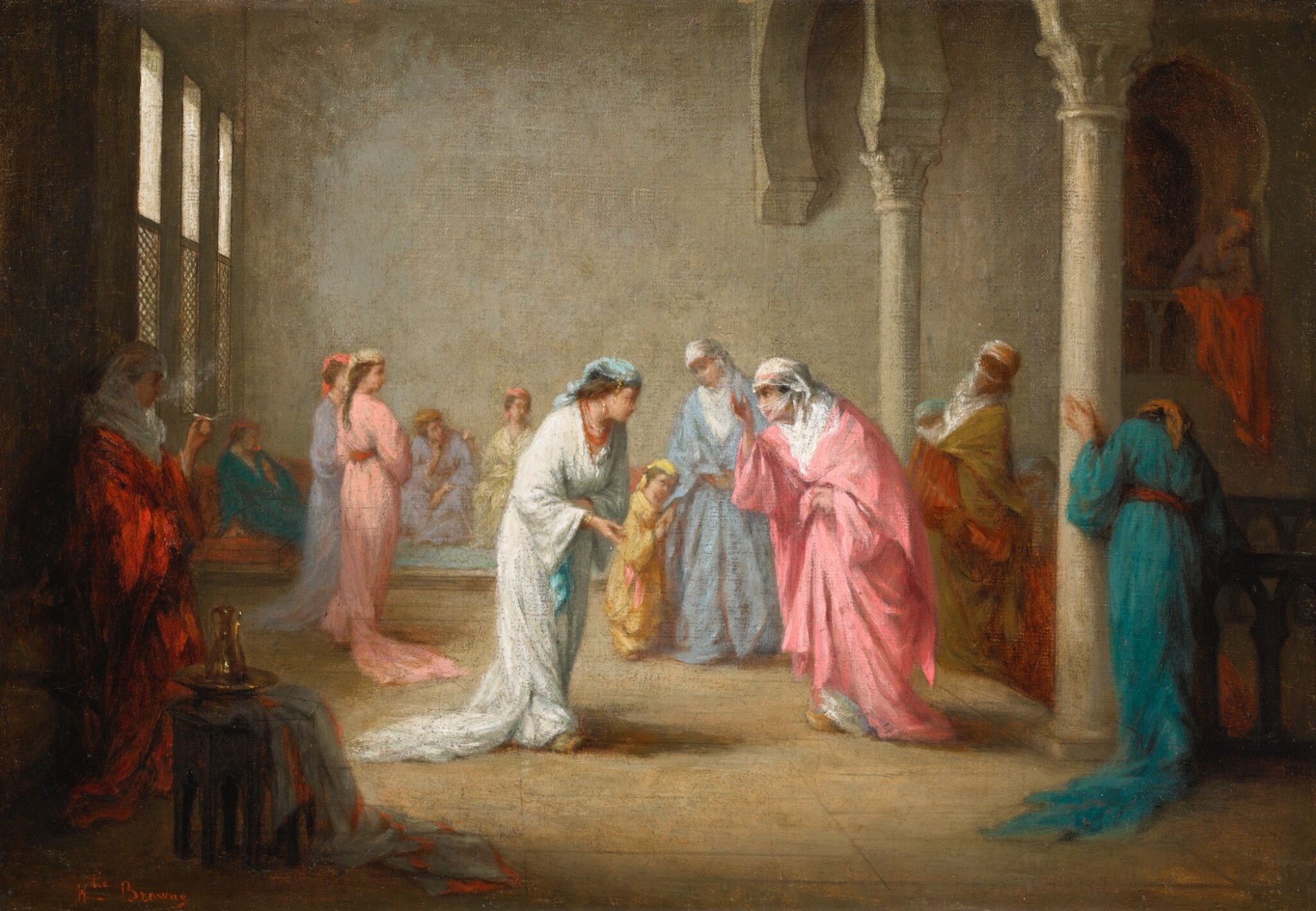 A VISIT: A HAREM INTERIOR

The canvas has not been lined and is securely attached to a keyed wooden stretcher which appears to be the original.

There is some minor rubbing along the extreme right framing edge.

Inspection under ultra-violet light reveals areas of residual varnish which fluoresce unevenly but there is no visible sign of restoration.

This work is in good condition and is ready to hang.

This painting is rare and important on two counts: first, because it is by a female artist, one of the few women Orientalist painters active in the nineteenth century; and second - by virtue of being painted by a woman - for providing a true insight into, and understanding of, the working of the harem, a sophisticated social space inaccessible to male eyes, and therefore so often the subject of hackneyed, voyeuristic, depictions.

As early as the early eighteenth century, Lady Mary Wortley Montagu, had accompanied her husband to Constantinople where in 1717-18 he was briefly ambassador. During that time she had privileged access to the harem, which she described in her 'Embassy Letters' published postumously in 1763. Turkish women, Montagu concluded, were more, not less, free than their European sisters. By the middle of the nineteenth century, with the appearance of an increasing number of Oriental travel books by female authors to whom the harem was not off limits, the French poet and critic Théophile Gautier even declared in 1861 that only women should bother travelling to the Orient, as a male tourist's experience would necessarily be so much more limited.

Gautier's comment was prompted by the appearance at the Paris Salon of 1861 of two paintings of a harem by a woman, based on her own experiences. This was Henriette Browne, the English professional pseudonym of Sophie De Saux who, similarly to Montagu, accompanied a diplomat husband to Constantinople for a fortnight in 1860 and the following year exhibited in Paris Une Joueuse de flûte (intérieur de harem) Constantinople and Une Visite (intérieur de harem), Constantinople, of which the present work is a smaller version, or réduction.

Devoid of any sexual connotation and set in a minimalist interior, Browne's painting depicts the visit of one harem to another, in a ritual of politeness. One group of women, lightly veiled with yashmaks for their journey, ascend to their hostess's sparsely furnished apartment (they have brought their own cushions), where only one of the assembled ladies makes any effort to greet them. The leading visitor makes the conventional salutory gesture of touching her forehead, lips and chest with her right hand. A child is also present, affectionately clutched to what is possibly her mother’s hand offering protection.