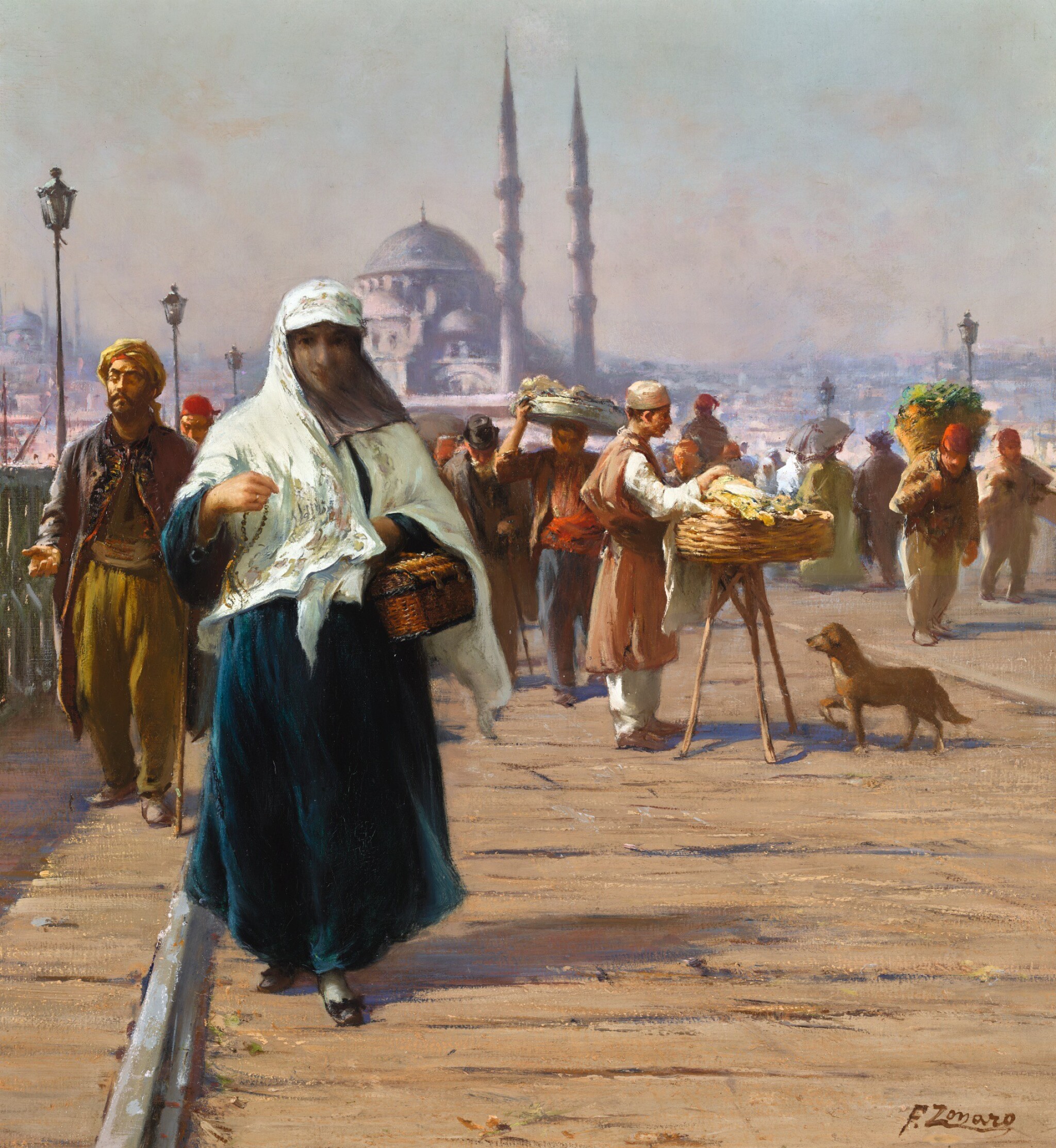 ON THE GALATA BRIDGE, CONSTANTINOPLE

The canvas has not been lined and is securely attached to a keyed wooden stretcher which is providing stable support.

The paint surface is clean. There is a pattern of hairline craquelure throughout; however, this is not visually distracting and it is stable.

Inspection under ultra-violet light reveals some minor cosmetic retouching, including some areas in the sky and in the dog. Otherwise, this work is in good condition and is ready to hang.

Presented in a gilt frame.

Private collection (purchased at the above sale)

I could not even begin to describe, with my untrained pen, the entry into the port of Istanbul […] I will perform this duty not with a pen but with brushes, every hour of the day, from morning to evening, and, after countless, unsuccessful attempts, I will finally get this blend of colours that creates that bedazzling atmosphere onto my palette.

This view across the Galata Bridge spanning the Golden Horn, with the dome and minarets of the New Mosque beyond, has the qualities of a photographic snap shot of Constantinople's bustling street life. Pedestrians cross towards the Galata side of the city, while a street hawker sets up his stall to take advantage of the passing traffic. Built in 1845 and originally called the Sultan Valideh Bridge, it was rebuilt several times. The current structure dates from 1912.

The Galata bridge was a key artery for many, including Zonaro, who had moved to Constantinople in 1891. As noted in his diary, the city's sites and customs offered a constant flow of subjects for his paintings: ‘whenever I was tired […] I would watch the comings and goings of a large ship, on which something interesting and significant always happens; or sometimes I would watch with some amazement the heaving mass of people crossing the bridge all day without stopping in a seemingly forlorn flurry: like a cinema with an ever-lasting film…’. (Erol Makzume, Cesare Mario Trevigne, Fausto Zonaro, Twenty Years Under the Reign of Abdülhamid, The Memoir and Works of Fausto Zonaro, 2011, p. 40)

Zonaro's talent soon came to the attention of Abdül Hamid II, the last Ottoman Sultan, who appointed him painter to his court. Zonaro went on to become a teacher at the School of Fine Art founded by Osman Hamdy Bey. Thanks to the Sultan’s patronage, Zonaro was able to explore every corner of the city undisturbed, painting city views, markets, public ceremonies and religious festivals that would have otherwise been forbidden to him by Islamic law (fig. 1).