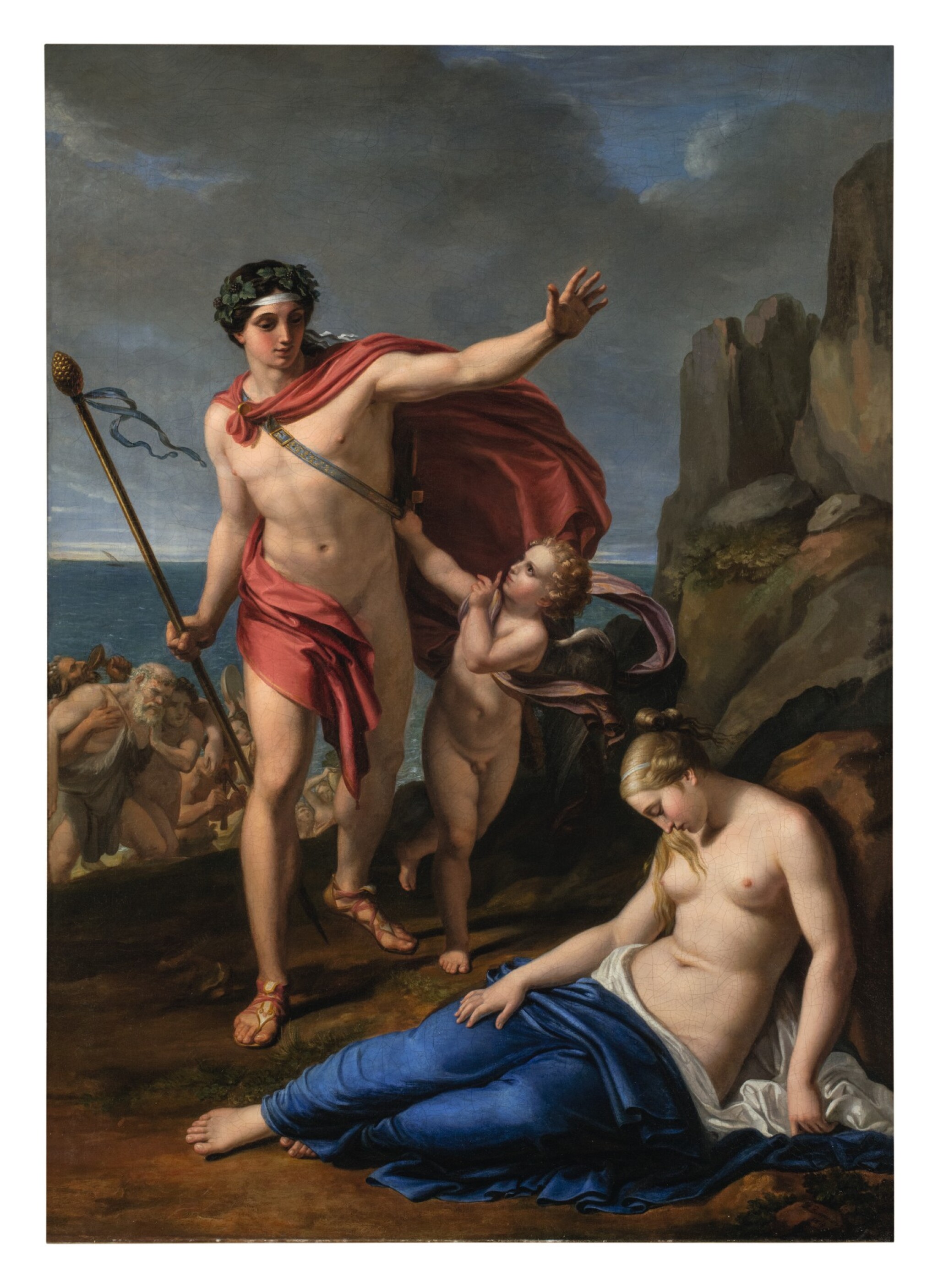 The canvas appears to be thinly lined and is stable on its stretcher. The painting reads strongly, and the colors remain vibrant and many of the details still well preserved. There is a pattern of stable craquelure visible throughout, and there are no visible losses or instabilities to the paint surface throughout. There is an old repaired tear that runs through the center of the composition, about 12” long, from the upraised arm of Bacchus to the center of Cupid’s body. There is an additional repaired tear that runs horizontally above Cupid’s head and into the rocks at right. These two repairs have some associated retouching that has been well applied.  Under UV: the varnish is somewhat milky and fluoresces unevenly in areas. There are scattered retouches in the background, for example in and near the upper rocks, in the lower left corner, and some strengthening to some of the darker shadows in the background, for example in the background around the legs of the figures at center. There is a repaired puncture in the underarm of Bacchus and some retouching to the upper body and face of Cupid, largely to address the aforemetioend repair. Similar to the background, there are some strokes of strengthening to the shadows in the figures, such as the hands of Bacchus, his calves, in the shadow of Ariadne’s neck, and in the folds of the fabric of her lower costume. There is a spot of retouching near the center of the figure of Silenus in the background. Overall, these restorations and retouches have been well-applied and no further work is necessary. The painting can certainly hang as is.  Offered in a decoratively carved gilt frame.

"The enduring appeal of the story of Bacchus and Ariadne is told here by Benvenuti, one of the leading Italian Neoclassical painters in Tuscany and the eventual Director of the Accademia in Florence. Benvenuti’s solid forms and extreme attention to the details of musculature and surface illustrate his direct awareness of the sculptor Canova, who was also a personal friend."

This impressive depiction of Bacchus and Ariadne was painted by Pietro Benvenuti, one of the leading figures of the Italian Neoclassical movement. It remains a notable example of his work for private patrons, completed in 1819 for "Colonello" Wilson, as confirmed by the dedication on the 1823 engraving after this painting.1 Here, the beautiful Ariadne, disconsolate after her beloved Theseus abandoned her on the island of Naxos, has fallen asleep on rocks near the shore. She is approached by Bacchus, the god of wine, led by the figure of Cupid, who pulls him along while cautioning him to silence at the same time. Bacchus wears a crown of grape leaves and grape clusters, and he grasps in his right hand his traditional attribute, the thyrsus, or a staff topped with a pine cone. Raising his arm in a gesture of astonishment and protection, he immediately falls in love with a partially garbed Ariadne. In a moment, she will awake, and the two will go on to marry and enjoy eternal happiness together. In the background at left, an aged Silenus, Bacchus’ tutor, is being helped up the hill, surrounded by satyrs and maenads, drinking, dancing and playing music.

Benvenuti carefully worked through this composition by way of a number of preparatory sketches. An initial study showed Bacchus standing on the right, with a prone Ariadne on the left.2 A more developed drawing in the Casa Sandrelli in Arezzo, detailed more of the essentials of the composition with Bacchus and Ariadne in nearly their final positions, but with Cupid on Bacchus’ left and his pursuing jovial entourage on his right.3 A third drawing in the Bartolini Collection in Siena more closely established the final composition.4

Fornasari has drawn attention to the varied influences on the career of Benvenuti around the time he completed the present painting—from ancient sculpture, to 16th century Venetian painting, and to the works of Canova and Thorvaldsen. Certainly, there are echoes of both the Apollo Belvedere in the Vatican in Rome5 and Thorvaldsen’s Jason with the Golden Fleece today in the Thorvaldsen Museum, Copenhagen in Bacchus’ pose and attitude, while the figure of the sleeping Ariadne recalls both ancient sculptural prototypes and the elaborations of them by Titian and his contemporaries.

Benvenuti’s career was particularly rooted in Tuscany. Born in Arezzo, he entered the Accademia di Belle Arte in Florence as a young artist and studied under Giuseppe Piattoli and Sante Pacini. In his 20s, he travelled to Rome, where his art developed not only under the influence of Vincenzo Camuccini and Antonio Canova, but also from his first hand exposure to Italian Baroque painting. Benvenuti’s career flourished during a period of French rule in Italy (1794-1814). He returned to Florence in 1903 as Court Painter and Director of the Accademia in Florence, and commissions from Napoleon and his sister Elisa Baciocchi, who was appointed Grand Duchess of Tuscany, soon followed. After the fall of Napoleon and the restoration of the Habsburg-Lorraine dynasty, Benvenuti continued to receive important commissions, among which were frescoes in the Palazzo Pitti and the ceiling of the Cappelle dei Principi in San Lorenzo. Throughout his career, Benvenuti combined his love of drama with crisp and legible design to create classicizing compositions with a vibrant Romantic tendency.

1. Benvenuti also mentioned this Bacchus and Ariadne in his third-person autobiographical notes published by Viviani: "He painted a picture with figures one-third life size, depicting Bacchus finding Ariadne on the Island of Naxos for an English gentleman."