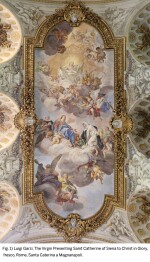 THE VIRGIN PRESENTING SAINT CATHERINE OF SIENA TO CHRIST IN GLORY

The painting has been relined. The painting is clean overall, although one could perhaps freshen the varnish. The painting makes a very nice impression. As a sketch, it is more thinly painted in parts and more lushly painted in others. In the areas that are more thinly glazed, there is some brown showing here and there, but this does not throw off the balance of the painting in any way and is typical of this type of highly finished sketch. Under UV: An old repaired hole is visible in the sky about three inches above the head of Christ. Some other small restorations to the right of his head and shoulder. There is a restored damage above the angel holding the two crowns. Other scattered restorations are visible in the cloud lower left. There are some restorations in all four unpainted spandrels in the corners and along the edges at left and right. None of these restorations are particularly distracting. Offered in a gilt carved wood frame.

"How wonderful to be able to bring a monumental ceiling painting into your own home. That is what we have here, with Garzi’s bozzetto for his ceiling fresco in the Roman Church of Santa Caterina Magnapoli. Garzi was a leading member of the Roman classicism movement which was en vogue in the Eternal City at the onset of the 18th century, and this picture contains all the lyrical, proportioned, and balanced qualities which made that style so revered."

This large and detailed canvas depicting The Virgin Presenting Saint Catherine of Siena to Christ in Glory by Luigi Garzi is a bozzetto for one of the finest projects of his long career: a ceiling fresco datable to the early 1710s in Santa Caterina a Magnanapoli in Rome (fig. 1). Like the final project, the sketch unfolds across several registers with the figures masterfully arranged along a gentle S-shaped curve that draws the eye upward. Christ is shown blessing at the zenith of this swirling mass of clouds and figures, while the Virgin and Saint Catherine are placed prominently below. The protagonists are surrounded by a host of winged angels, flying putti, and other holy figures, including Saint John the Evangelist and Saint Dominic to the left of the Virgin, and Mary Magdalene and Saint Catherine of Alexandria to the right of Saint Catherine of Siena. In the final fresco, Garzi made some subtle changes to the position and description of some of the figures, but the most notable change visible is the movement of Christ’s blessing gesture from his right to his left hand.

Luigi Garzi was born in Pistoia and had moved to Rome by the age of fifteen, when he entered the workshop of Andrea Sacchi, one of the leading proponents of Baroque classicism in seventeenth-century Rome. It is largely to Sacchi and his most celebrated pupil, Carlo Maratti, that Garzi owes the cool and refined style that characterizes his works. Garzi had a highly successful career in Rome. He was appointed in 1680 as regent of the Congregazione dei Virtuosi al Pantheon, the papal art academy, and in 1682 the director of the Accademia di San Luca, the painter’s guild. He is best known for his large-scale ecclesiastic commissions. In addition to the ceiling fresco for which the present sketch was made, other notable examples can be found throughout Rome in San Carlo al Corso, the chapel of San Francesco in San Silvestro in Capite, the naves of San Giovanni in Laterano, the Oratory of Santa Maria Traspontina, and San Paolo alla Regola.

A preliminary drawing for Garzi's fresco in Santa Caterina a Magnanapoli is preserved today in the Louvre,1 and in addition to the present sketch, three additional bozzetti are known: one in the Statens Museum for Kunst in Copenhagen, one formerly with the Heim Gallery in London,3 and a third formerly on the art market in Rome.4 The four bozzetti appear to have been produced at roughly the same moment in the design process, as few compositional differences between them appear. The most salient variation is the choice of palette, with more muted colors in the Copenhagen example and more vibrant and bold colors in the present example. It would seem likely that these repetitions of the composition were executed for the patron or patrons of the fresco, although it is possible that one or more were painted to be sold independently to collectors.  Of the four versions known, the present example appears to be the most highly finished and detailed. In addition to distinguishing features such as Christ's radiant halo, it stands out for the dramatic play of light and shadow across the composition.

3. Oil on canvas, 114 x 45 cm. This painting was paired at the Heim Gallery with a similar sketch by Garzi from a ceiling fresco project in Naples. It is not known for certain when these paintings were with the Heim Gallery, but it appears to have been circa 1971. See The Heim Gallery Records, The Getty Research Institute, Los Angeles.

6. It has previously been suggested that the painter Pietro Nelli (1672-1730), about whom little is known may have assisted in executing the final ceiling fresco, as Garzi was at an advanced age with the project was completed. There is no evidence to suggest this beyond the fact that Erasmo Pistolesi erroneously named Nelli as the author of the fresco in his 1841 Descrizioni di Roma e suoi Contorni, p. 332. See Poensgen 1969, pp. 90-91 and E. Waterhouse Roman Baroque Painting: A List of the Principal Painters and their Works in and around Rome, Oxford 1976, p. 78.