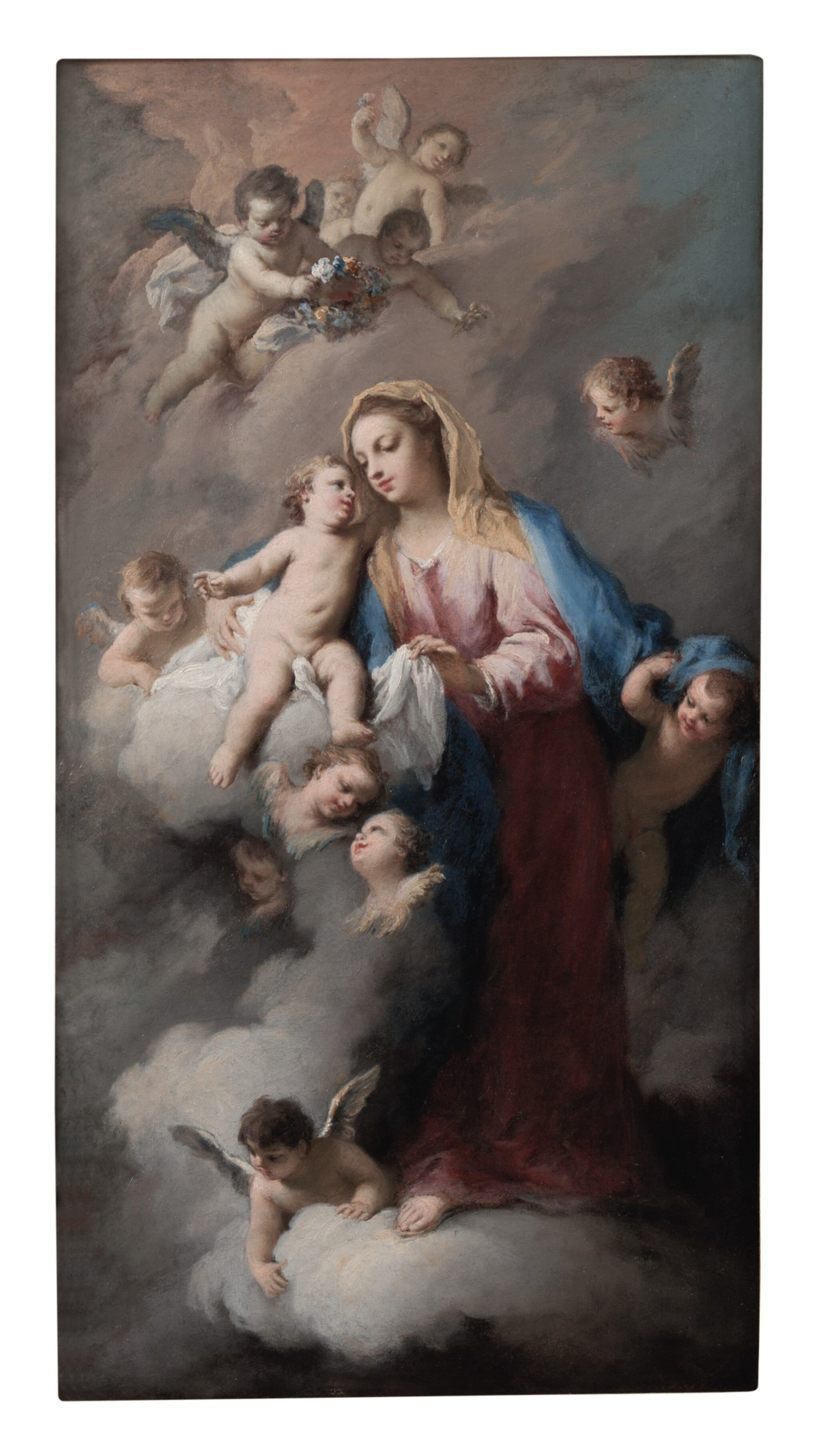 MADONNA AND CHILD WITH ANGELS, IN THE CLOUDS

The canvas is lined and stable on its stretcher. The painting appears to be in good condition and presents a lovely image. Some passages of impasto are still preserved, particularly in the whites of the cloud at center left and in the yellows of the veil on the Madonna's head. Some of the reds and blues of her lower costume may have slightly discolored with age. An old thin horizontal repair or fissure is in the sky at upper right. Under UV: more recent fine and feathered strokes of restouching are scattered here and there, with some concentrated in the Madonna's lower costume. There are some spots of restoration near the center of the lower edge, one old filled and retouched spot in the Madonna's costume at lower right, a thinly retouched line in the lower left corner, and some feathery strokes at the center of the upper edge. Some scattered spots are visible in the face of the putto at the center of the right edge, and in the background above the putti at upper left. There may be an older campaign of restoration beneath that is difficult to discern under UV. None of these retouches are distracting, and the painting can hang in its present condition. Offered in a decoratively carved and gilded frame.

By whom gifted to the Poor Sisters of Saint Francis, Trianon, Colorado Springs, 1952;

Transferred to the Metzger Family Foundation, Trianon Art Museum, Denver in 1967 and until 2004;

Thence by descent in the Metzger Family;

By whom sold ("Property from the Trianon Museum, Denver, Colorado and the Metzger Family Collection"), New York, Christie's, 3 June 2015, lot 33.

"Amigoni was the consummate professional. He found ready work all over Europe, from notable sojourns to Germany, England and Spain, as well as in his native Venice. The dusty bright colors here are classic Amigoni, but what I particularly love is the fact that this is a modello for an altarpiece. Modelli were presentation pieces, meant to be shown to clients as studies for approval before the final large-scale commissions were carried out. In this sense they represent the artist’s initial spark of creativity, not unlike drawings, but here much more finished. That they were not even meant for public consumption is what I love most. We are peering not only inside the artist’s mind, but also inside the transactional relationship between artist and patron."

Rich in delicate pastel colors, this small and jewel-like canvas was painted around 1739 by Jacopo Amigoni, one of the leading proponents of the Venetian Rococo on the international stage. It is probably a modello for an unknown altarpiece—one either lost or never painted. In it, the Madonna stands firmly upon a cloud in the heavens, the Christ Child resting on a delicate veil further supported by a cloud, as he gently wraps his arms around his mother’s neck. From above, angels prepare to lower flowers and a wreath, while other angels and seraphim surrounding the two joyfully cavort.

Amigoni was a peripatetic artist. After completing his training in Venice he spent the majority of his career abroad, with long stints in southern Germany (1715 -1729), England (1729-1739), and, in the final part of his life, Spain (1747-1752). Between his periods in England and in Spain, where he served as court painter to King Ferdinand VI, Amigoni returned to Venice. After nearly a quarter of a century outside of Italy, Amigoni quickly absorbed the influence of contemporary Venetian painting, which had grown even grander and more resplendent during the artist’s absence. He clearly looked closely at the works of Giambattista Tiepolo, and the brilliant light effects found in his works from this period were undoubtedly influenced by the younger artist's aesthetics. The present painting is one of the first fruits of this moment of Amigoni's artistic development in Venice, soon after he returned from England. It stands out for the creaminess of the paint, the rich impasto, and the soft palette, particularly in the beautifully observed wreath, a sonorous chorus of colors.

Dr. Annalisa Scarpa has confirmed the attribution of the present painting and has suggested it was likely painted in Venice after Amigoni’s return from England. While likening the lifelike treatment of the angels to the putti often found in the large mythological paintings of Amigoni's English period, she suggests that the present picture should be dated before the artist's Madonna and Child with Saint Francis de Sales, a work dated 1743 in the Church of Santa Maria della Consolazione in Venice, also known as Santa Maria della Fava.