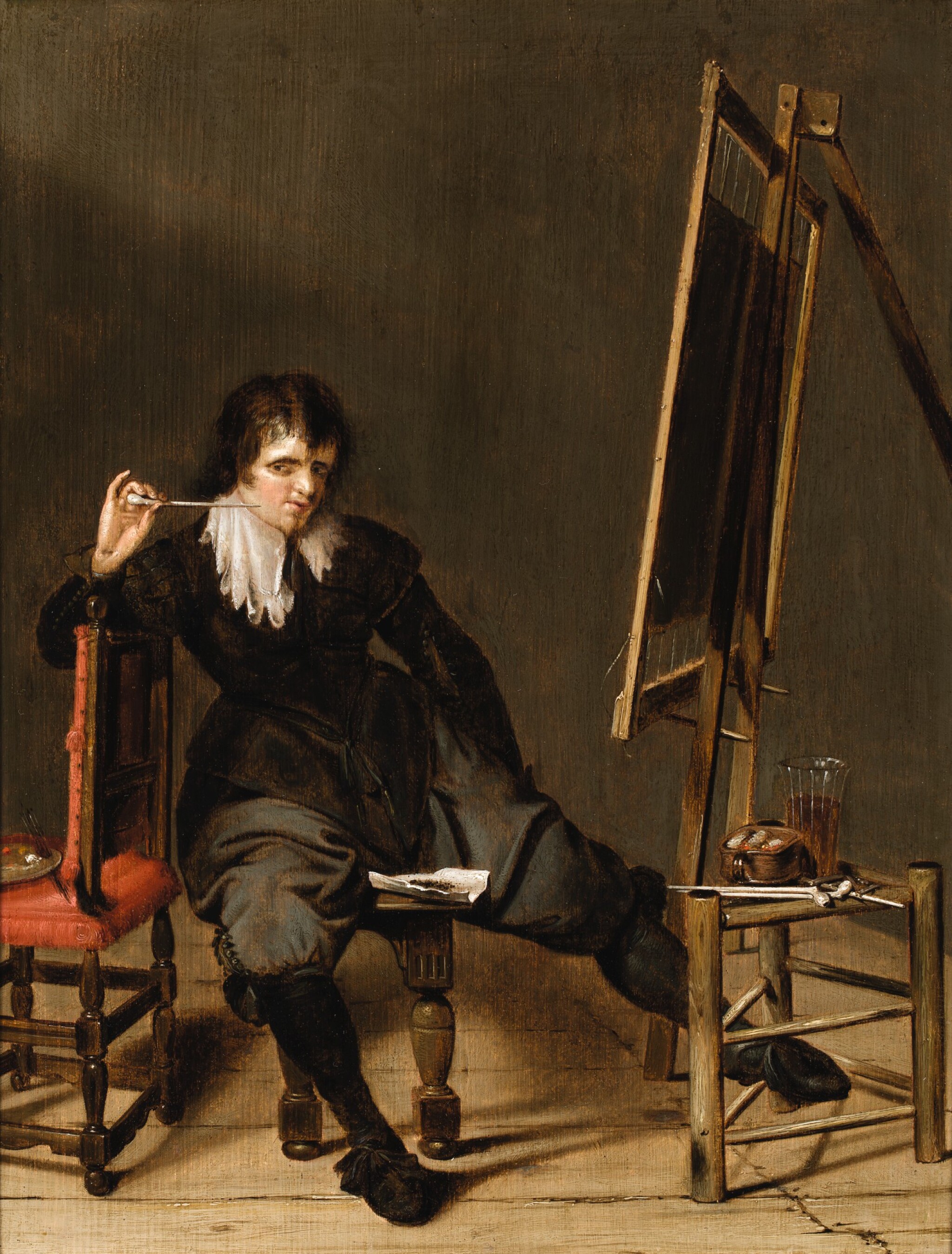 AN ARTIST IN HIS STUDIO, SEATED ON A STOOL, IN FRONT OF AN EASEL, WITH A PIPE RAISED TO HIS MOUTH

The panel is flat, stable, and beveled on all 4 sides, with only part of the bottom edge beveled. The portrait image reads strongly under a clear varnish with costume details visible. The wood grain is visible throughout due to the artist’s manner of thin execution in some areas. Under UV inspection, small spots of retouching are visible throughout, concentrated in background areas and shadows, with a larger area of retouching on the back of the artist’s easel. Retouching has been well applied and is not visible to the naked eye. Overall, painting is in good condition and can hang in its current state. Offered in a simply carved ebonized wood frame.

Madame Narbonne (according to an old label on the reverse).

"Art historians ponder and argue endlessly about the working methods of artists. This picture tells us that one artist at least paused for a smoke – quite frequently to judge by the number of pipes resting on the stool on which his foot rests. It is for us to guess if a tobacco break was for him a recourse for inspiration, or a reward for a passage successfully completed on his stretched canvas. Is he painting us?"

Together with Dirck Hals, Hendrick Pot and Willem Buytewech, Pieter Codde played a key role in the development of genre painting in Amsterdam during the first half of the seventeenth century. What is remarkable about the present genre scene is how he captured it with such natural immediacy. An artist, dressed in a dark costume with a white collar, sits in a relaxed pose in front of an easel. He looks directly out at the audience with a degree of familiarity as he lifts a tobacco pipe to his mouth and rests his arm on a chair. With his right foot planted on the ground in front of him, he stretches his left out and places it on the lower rungs of a nearby stool, topped with various wares such as additional tobacco pipes and a glass filled with liquids. His discarded artist’s palette has been replaced with a delicate sheet of paper, upon which lay a few leaves of tobacco. This composition is rendered with a realism that is typical of Codde, and the utmost care is taken in capturing small details within the scene, from the colors atop the palette, to the folds of the thick clothing, and to the thin strings stretching the canvas on the easel.  The coloring employed is also characteristic of his muted palette, restricted to mostly shades of green and brown, which allowed for him to concentrate on representations of light and texture within the scene.

This composition, which can be closely compared to his self-portrait in the Museum Boijmans van Beuningen in Rotterdam,1 appears to have been both popular and successful for Codde, for he executed a number of versions on this same small scale. Other examples, all of which are unsigned, are found in the Hermitage Museum in St. Petersburg,2 the Hallywlska Museum in Stockholm,3 and in a private collection in New York.4