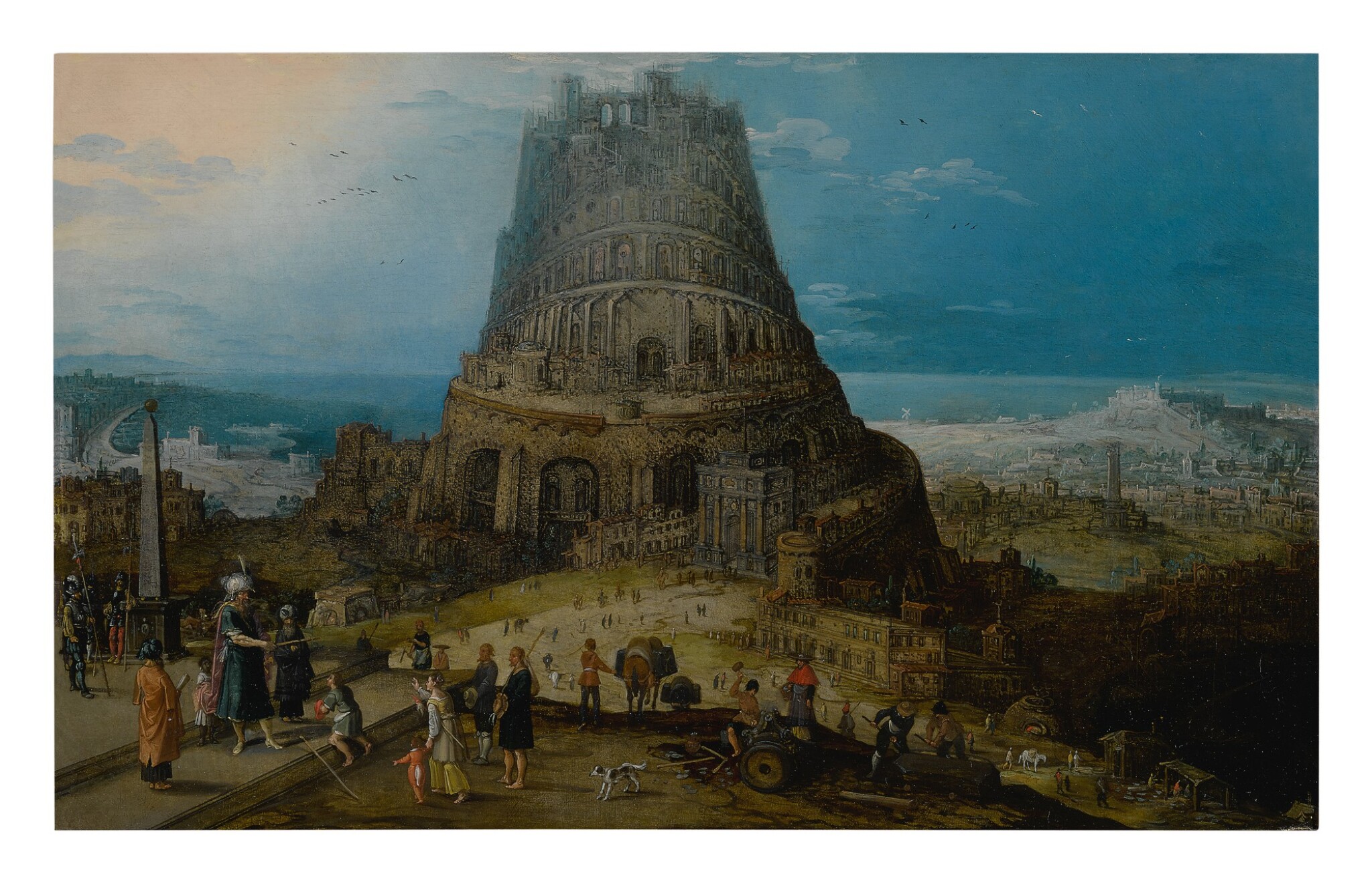 The panel is flat and stable. It is relatively thin and supported on the reverse by a thicker panel, which has then in turn been backed by another panel (it seems that there are three panels overall). The backing panel is beveled on all four edges and his a visible fissure running horizontally across the panel.  The paint surface is stable. The colors are vibrant, and the image reads clearly beneath a glossy varnish. In raking light, it appears that there may have once been a more prominent pattern of craquelure in the upper left and lower right corners that has since been stabilized, but this is not distracting. Under UV: scattered restorations are visible at the edges. Scattered spots and strokes of retouching are visible in the sky and the background background. Some spots are visible in the steps at lower left, particularly in the area behind Nimrod in the lower left corner. Retouching is visible in the field before the tower, including just to the right of the horse at center and the diagonal darker section towards the left. There are spots of retouching scattered in the tower, including one spot in the center, as well as scattered in the background to the left of the tower, along with possibly some strengthening to the darker tones. A spot of retouching is visible in the background at lower right, and a few spots are visible in the horse at center. The painting can be hung in its present condition. Offered in a simply molded darkwood frame.

"The Tower of Babel was such a popular subject among painters from Antwerp in the 16th century that it almost became a separate school of painting. The subject is still compelling to us today for the same reasons: it combines landscape, architecture, many figures in exotic costumes, and a moralizing lesson on pride that also serves as an origin myth for different cultures and languages."

The story of the building of the Tower of Babel comes from the Old Testament (Genesis, Chapter 11) and recounts how the people, who all spoke a common language, decided to build a tower, the top of which would reach to the heavens. As punishment for their hubris, God confused the people’s language so they could no longer understand one another and scattered them over the face of the earth. This story provided a rich source of subject matter for Flemish artists in the 16th and 17th centuries whose representations were largely inspired by the two iconic examples painted by Pieter Bruegel the Elder in the middle of the 16th century—one dated 1563 in the Kunsthistorisches Museum in Vienna1 and another of circa 1568 in the Museum Boijmans Van Beuningen in Rotterdam.2

One sixteenth century artist who took to this theme regularly was Hendrick van Cleve III. He showed a marked interest in the architectural forms, sharp angles and vast and varied landscape that the subject visually allowed. Born in 1525 in Antwerp into a family of artists, he trained in the studio of his father Willem van Cleve, then in that of the painter Frans Floris. As a young artist, he traveled through Italy where he developed a strong foundation, drawing landscapes, city views, and ancient ruins. Upon his return from Italy in 1551, he entered Antwerp's guild of Saint Luke, and throughout his career, he collaborated with numerous artists, including his brother Marten (1527-1581), Ambrosius Francken (1544-1618) and even his master Frans Floris (1516-1570). Many of Hendrick's drawings of landscapes and imaginary views were engraved and published by Philippe Galle, including a series of thirty-eight views published in Antwerp in 1587 and entitled Henrici a Cleve ruinarum varii prospectus ruriumque aliquot delineationes.

A comparable highly detailed view of the same subject by Van Cleve is in the Kröller-Müller Museum in Otterlo.3 That example also includes King Nimrod in the foreground, as he oversees the building at hand.