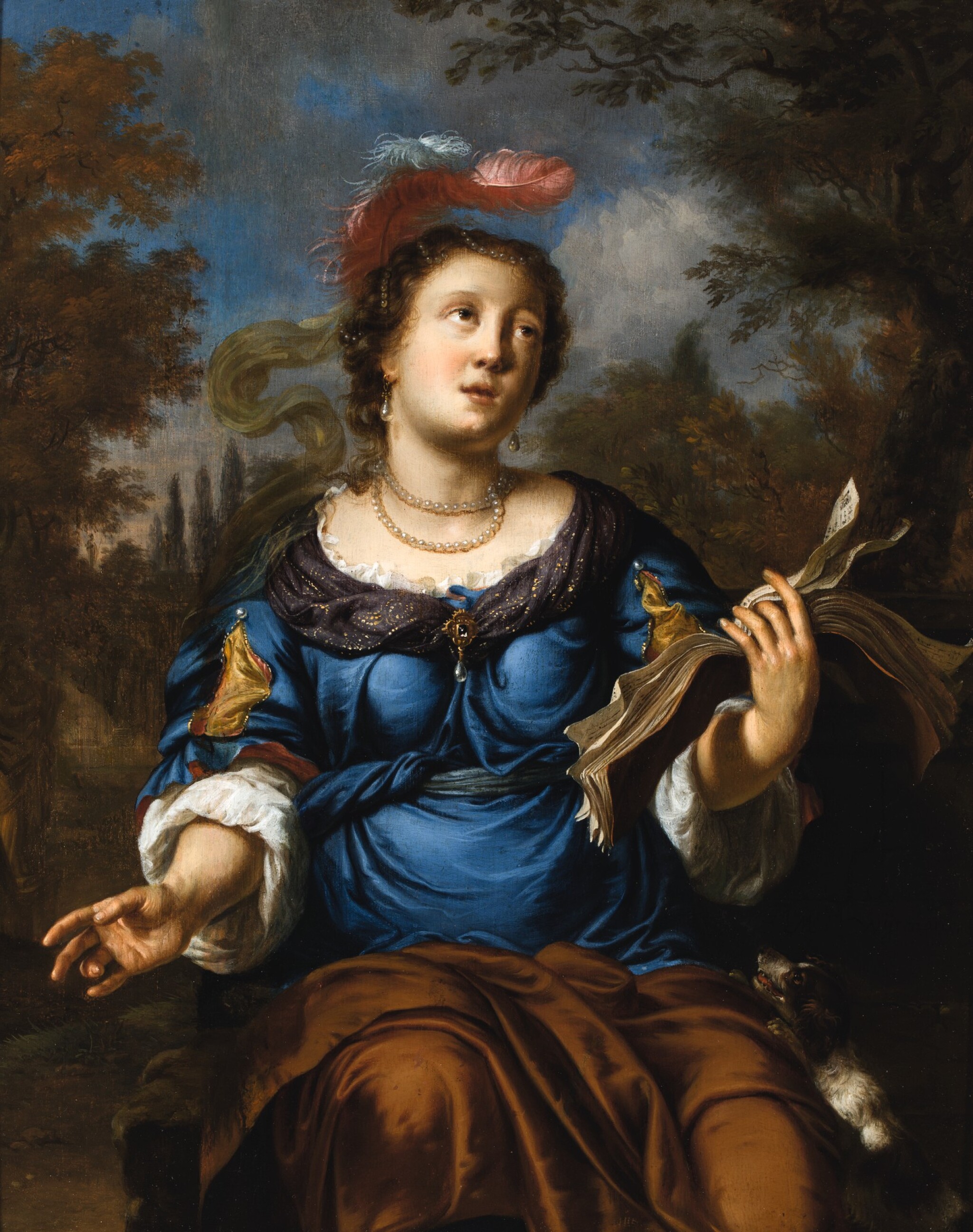 The panel is flat, stable, and beveled on all sides except the right. The portrait image reads strongly beneath clear varnish with bold colors and textures retained. Under UV inspection, retouching is visible along a vertical line beginning 2 inches from the left edge and running the length of the panel, probably to address a repaired crack. Otherwise retouches are visible in the darker background at left, and in a few small areas of repair such as under the woman’s proper left hand, above the book and a line on the woman’s skirt. Overall the painting is in good condition and can hang in its present state. Offered in a decoratively carved giltwood frame.

De Noaille et de Mathurin Rouvray collection, France (according to a wax seal on the reverse).

"This is a satisfyingly noisy picture. Not only is the young woman dressed up to the nines singing her heart out, but her feather and veil show us it is a windy day in the elegant park where she performs, and one suspects that her spaniel might be adding his own accompaniment."

In a lush garden with marble statues, a young woman sits and sings from a songbook. Dressed in blue and brown silks and wearing costly pearls around her neck, ears, and hair, she is an emblem of elegance and refinement. Her fluttering veil and airy feathers give her appearance a effortless elegance. The present unpublished panel is a significant addition to Wijtmans’s small oeuvre of about 15 paintings. Similar small and finely crafted panels showing a young man or woman at knee-length singing or playing a musical instrument are preserved in museums including the Walters Art Gallery, Baltimore; the Museum of Fine Arts, Budapest; the Gemäldegalerie, Dresden; Staatliches Museum, Schwerin; and the Louvre. In addition to these refined genre scenes, Wijtmans also painted portraits and still lifes.

Mattheus Wijtmans was the son of Dirk Wijtmans and Ida van den Bosch. The family was Catholic and in 1640, when Mattheus was a toddler, left Den Bosch for Gorinchem. Mattheus trained there with Hendrick Verschuring (1627-1690). By 1664 he is recorded as a registered painter. The next year, Mattheus went to Utrecht to further his education under Jan van Bijlert (1597/98-1671), whose influence is palpable in the present work. In 1667 he registered as an independent master in the Utrecht guild of St. Luke.