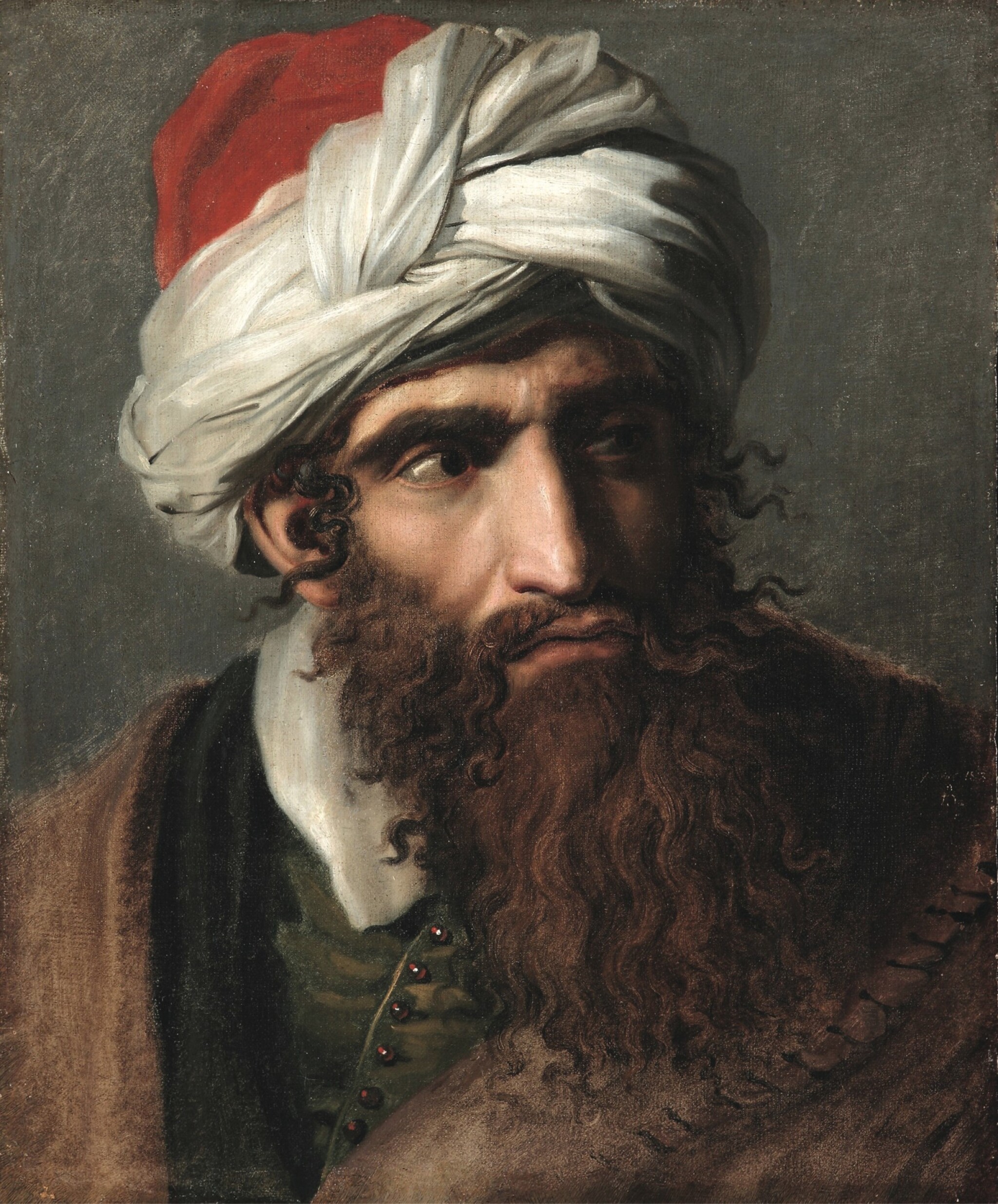 PORTRAIT OF A MAN IN A TURBAN, THREE-QUARTER PROFILE

signed with monogram and dated, lower right: janvier 1813/B.

The canvas has been relatively recent relined and is stable on its stretcher. The portrait image reads strongly beneath clear varnish. Some of the hair and costume are thinly painted and the rough weave of the canvas shows through, but this is due to the artist’s style and the paint surface is stable. Under UV inspection, retouching is visible to address a small repair in the red part of the turban and another one in the shadow on the man’s collar. Otherwise scattered small retouches are visible throughout but are finely applied and concentrated in the thinner areas like the lower right costume and the background. The painting is in good condition and can hang in its current state. Offered in a simply carved giltwood frame.

"The powerful presence of this gentleman is so moving it's as if you can feel him breathing. This is no quick oil sketch; it captures the sitter's character and mood so evocatively one cannot look away."

This striking oil-sketch of an Middle Eastern man stands in the tradition of early nineteenth-century French portraiture of Oriental or exotic sitters, which became popular in the wake of Napoleon’s Egyptian campaign of 1798-1801. When the Armée d’Orient returned from the Middle East to France, many local men and fighters followed. Famously, Bergeret’s contemporary and friend Girodet made about a dozen large-scale head studies of these men, including the Portrait of an Oriental in the Musée Calvet at Avignon (fig. 1). The Avignon picture, undated and nearly identical in size, shows the same sitter as our painting from a slightly different angle. He could be either a Middle Eastern man living in France or a model posing in that role. His remarkable features are close to those of another celebrated portrait by Girodet, Mordecai (1824, private collection), known until its recent rediscovery only from a lithograph.

In both our portrait and in Girodet’s paintings the face and head of the sitter occupy almost the entire picture plane and thus convey a sense of great monumentality. In style and handling of the brush, too, there are strong parallels with Girodet, most obvious in the Avignon Portrait of an Oriental, which must have been executed at the same time as ours. The type and colors of the turban, including the way it is tied, are identical in both paintings. Both portraits are relatively loosely painted, predominantly with earth colors while strong colors are used only sparingly. A Self-Portrait by Bergeret (private collection, Paris), dating from the first decade of the century, reveals an equally sketchy style and color scheme.1

At the beginning of the 19th century, Bergeret and Girodet both lived and worked in the Couvent des Capucines, an abandoned convent then located in what is today’s Place Vendôme. Prior to its demolition in 1806, the convent’s cells accommodated numerous young artists, including Ingres and the sculptor Lorenzo Bartolini, who were close friends and ran a sort of academy dedicated to the study of Italian Renaissance art. Over a period of nearly fifty years, from 1806 to 1853, Bergeret exhibited paintings of troubadour and Orientalist subjects at the Paris Salons.