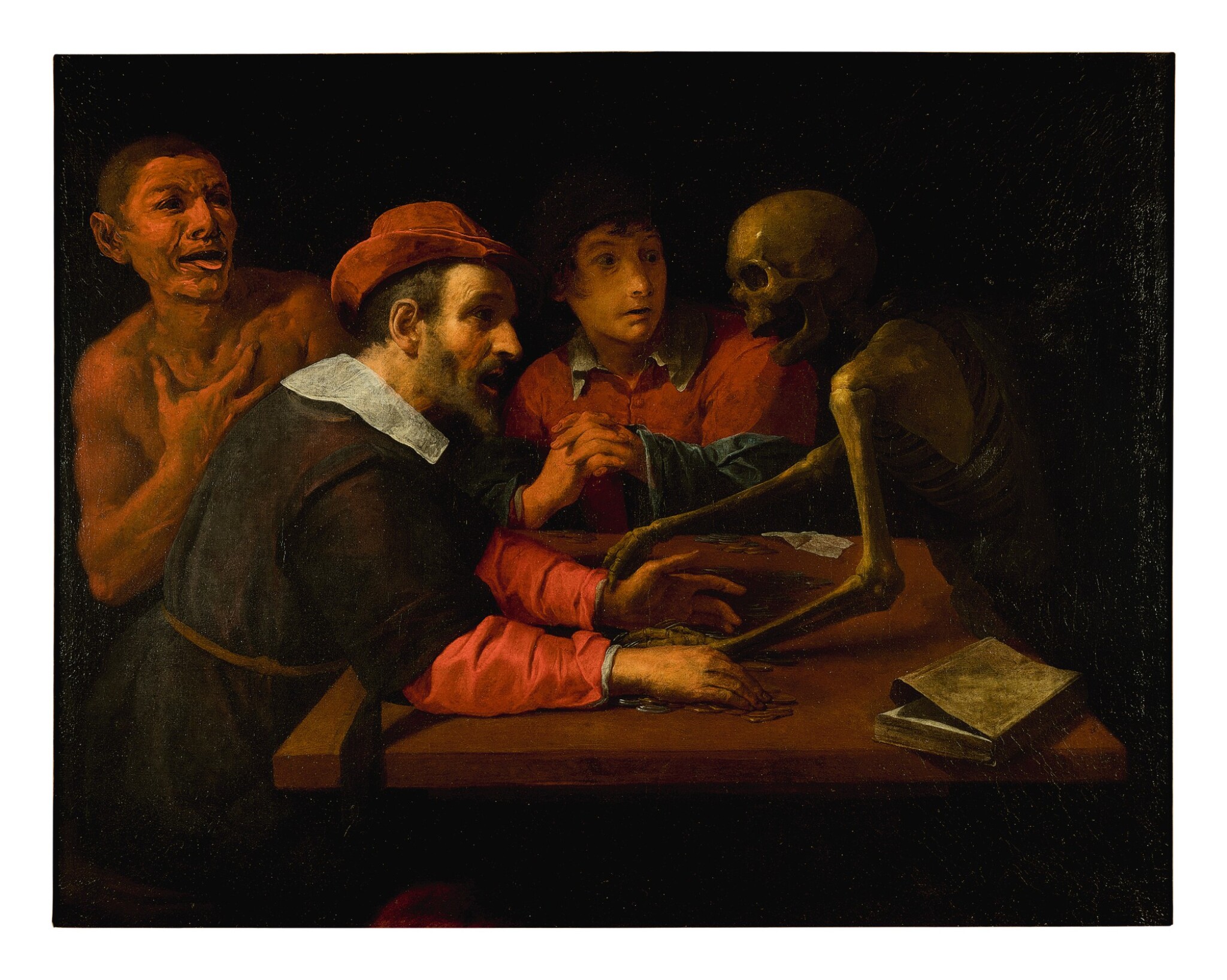 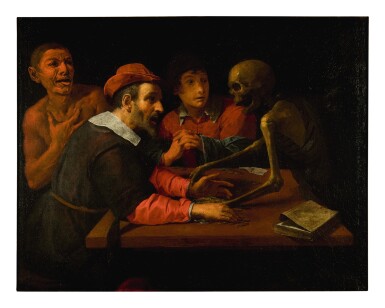 DEATH COMES TO THE TABLE OF THE MISER

The canvas has been relined and is flat and stable. There is a thick, shiny varnish over the painting. Some of the darker colors have sunk a bit, but the bright colors, particularly the reds, remain vibrant. Subtle glazing is particularly well preserved in areas such as the face of the figure second from left and some areas of the figure of Death. Under ultra violet light, some scattered small retouching is visible, mostly in the dark areas, and notably only in an old tear at center right in the background, which has been retouched. It is about 3-4 inches long and the retouchings are visible to the naked eye. Offered in a carved giltwood frame.

"Martinelli is one of the most original of the Florentine baroque masters influenced by Caravaggio, as perfectly exemplified by this harrowing scene in which the figure of death seizes an old miser clinging onto his wordly goods. The look of horror on the face of the young man in the background adds to the heightened sense of terror and serves to remind us all of the transience and vanity of worldly goods."

Unknown before the 2011 monographic exhibition, this striking painting can now be definitively linked to the Corsi family, whose palace on the via Tornabuoni housed one of the most significant collections assembled in seventeenth-century Florence. The Corsi accounts for 1638 record a payment of seventy lire made on the 24th of March to Giovanni Martinelli and subsequent payments on the 26th of July and 20th of August for ‘diversi lavori fatti e da farsi’ on behalf of monsignor Lorenzo Corsi.1  This, combined with three later references to a painting in the Corsi inventories matching the subject of the present work, signifies that in all likelihood that the painting formed part of the ‘diversi lavori’ carried out for Lorenzo Corsi in 1638.2

Lorenzo Corsi, papal vice-legate in Avignon between 1645 and 1653, lived between Florence and Rome when in Italy, maintaining close connections with the Medici and Barberini families in each city respectively, with Ferdinando II de’ Medici entrusting him with two important legations to France, the latter at the death of Marie de’ Medici in 1642. Lorenzo was particularly close to Carlo and Giano Carlo Medici, both of whom were cardinals, and all three held passions for music, theatre, rare flowers and landscaping, as well as sharing artistic tastes. Indeed, their closely connected patronage is demonstrated by archival records indicating that by 1637 Giano Carlo owned a painting by Martinelli entitled Death Comes to the Banquet Table, probably the version in the New Orleans Museum of Art depicting a skeleton approaching a table of richly dressed youths (fig. 1).

The subject of the painting is an innovative take on the closely related and classic themes of the memento mori and vanitas. The former can be considered a meditation on the transience of life and the certainty of death, while the latter is more akin to a reminder of the futility of the possession of worldly goods and an exhortation to the viewer to live morally. Within the cultured and courtly world of Medicean Florence these were popular themes, discussed during the philosophical debates held at the various academies of the city. The subject was clearly significant to Martinelli, testified by the five known versions by his hand: the present picture and aforementioned canvas in New Orleans; an autograph reproduction of the New Orleans picture in the Etro collection; the painting at the North Carolina Museum of Art;3 and finally a version whose location is unknown, but was formerly with Colnaghi in 1959.4

The Corsi pictures distinguishes itself from the other versions in its reduced composition and, most importantly, in the presence of the old miser, who replaces the festive group of youths. As a stunned boy looks on, an open-mouthed Death, in the form of a skeleton, grips the hand of an old miser counting his pile of coins, determined to hold onto his gains even though his end is imminent. At the left of the composition a diabolical figure, his red flesh alluding to the fires of hell, sticks his tongue out in a manic grin and waits in anticipation to seize the soul of the old sinner.

Martinelli was born in Montevarchi, a Tuscan town in the province of Arezzo, moving to Florence in late adolescence to study and live with Jacopo Ligozzi, remaining there until 1625. There is no documented trace of Martinelli for the next decade, though it is very likely he enjoyed an extended stay in Rome, profiting from the study of the Caravaggesque painting he would have encountered there. Martinelli returned to Tuscany by at least 1632, the date at which he painted the Miracle of the mule for the church of San Francesco in Peschia, near Pistoia, before settling again in Florence, where he enrolled in the Accademia del Disegno in 1636, living there for the remainder of his career. Long neglected, it was not until 2011 that the importance of Martinelli to Seicento Italian painting was widely recognized, with the publication of the first monographic volume dedicated to the artist and the exhibition in Montevarchi organized by the Uffizi proving to be key turning points. His allegorical representations, in harmony with the intense philosophical climate of the Florentine academies and the Medicean circle, are amongst the most accomplished and innovative of the period, with his half-length representations of female figures and his series on Death, of which the present painting constitutes a significant example, being the most celebrated of these.