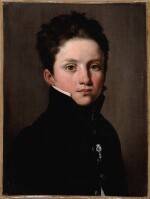 PORTRAIT OF A YOUNG BOY WEARING THE DÉCORATION DU LYS

oil on canvas, unlined, with original stretcher, in original frame

The canvas has not been relined, and remains flat and stable. The paint layer is extremely well-preserved, and the colors, details and highlights remain vivid and fresh.There is a subtle craqueleure pattern that is not bothersome, and can be seen mainly in the dark of the sitter's jacket. Under ultraviolet light one can see a handful of pinpoint retouchings but none of note. The condition is excellent overall and it can be hung as is. Offered in a carved giltwood frame.

An artist of staggering ingenuity as both a painter and draughtsman, Louis-Léopold Boilly was famous for his inventive, original and often humorous genre scenes depicting contemporary Parisian life, as well as his trompe-l’oeils and portraits. Of the latter, one of his most successful undertakings was the production of small, finely finished bust-length portraits measuring approximately 22 by 17 cm, each having a distinctive stretcher with a rounded cross-bar. Perhaps starting this series in 1795, when Boilly exhibited two at the Salon, the artist would go on to paint around 4,000 of them over the next few decades, of which the present work is one of the finest and most charming examples.

Boilly worked quickly, with the livret of the Salon of 1800 announcing under entry number 39 ‘Several portraits under the same number, each done in one sitting of two hours’, and he worked inexpensively, executing the portraits on prepared canvasses acquired directly from a color merchant, applying the brush directly, without relying on preparatory drawings, attesting to his confidence and skill. This allowed him to charge the reasonable price of 120 francs per piece, according to Stendahl, though given the large number he executed, these commissions overall formed a significant part of his income. Though the identities of most of the sitters remain unknown, it is clear that Boilly painted a dazzling-cross section of French society, including artists, doctors, soldiers, nobles, matrons and children, ensuring that these portraits in their totality almost seem to capture the era better than any other monument or artwork of the age.

The best of these small portraits were painted with the dexterity and insight employed by Boilly in his genre scenes, with the artist having a particular talent for conveying the feelings and emotions of children. One of his most well-known small format portraits is the picture, in the Musée du Louvre, of Gabrielle Arnault with her cat (fig. 1), captured with the sweet innocence of childhood. There is likewise a tangible psychological insight in our young boy looking confidently out at the viewer and proudly wearing his Décoration du Lys. The Décoration du Lys, with the fleur du lys being the symbol of the French monarchy, was created in 1814 during the Bourbon Restoration, after the abdication of Napoleon following his defeat during the Six Days’ Campaign. On April 26th the comte d’Artois, brother of the new king Louis XVIII, ordered the creation of the decoration in order to honor the garde nationale of Paris for their sacrifice to the royal cause, before being extended to all the gardes nationales of France, as well as government functionaries. It was also decided that prize-winning school children in the scholarly year of 1813-14 should receive the Décoration du Lys, with, for example, Honoré de Balzac receiving it as a schoolboy in Tours in 1814. Our picture must also depict a successful student of that year, whose parents perhaps commissioned his portrait as a way of commemorating his academic achievement.