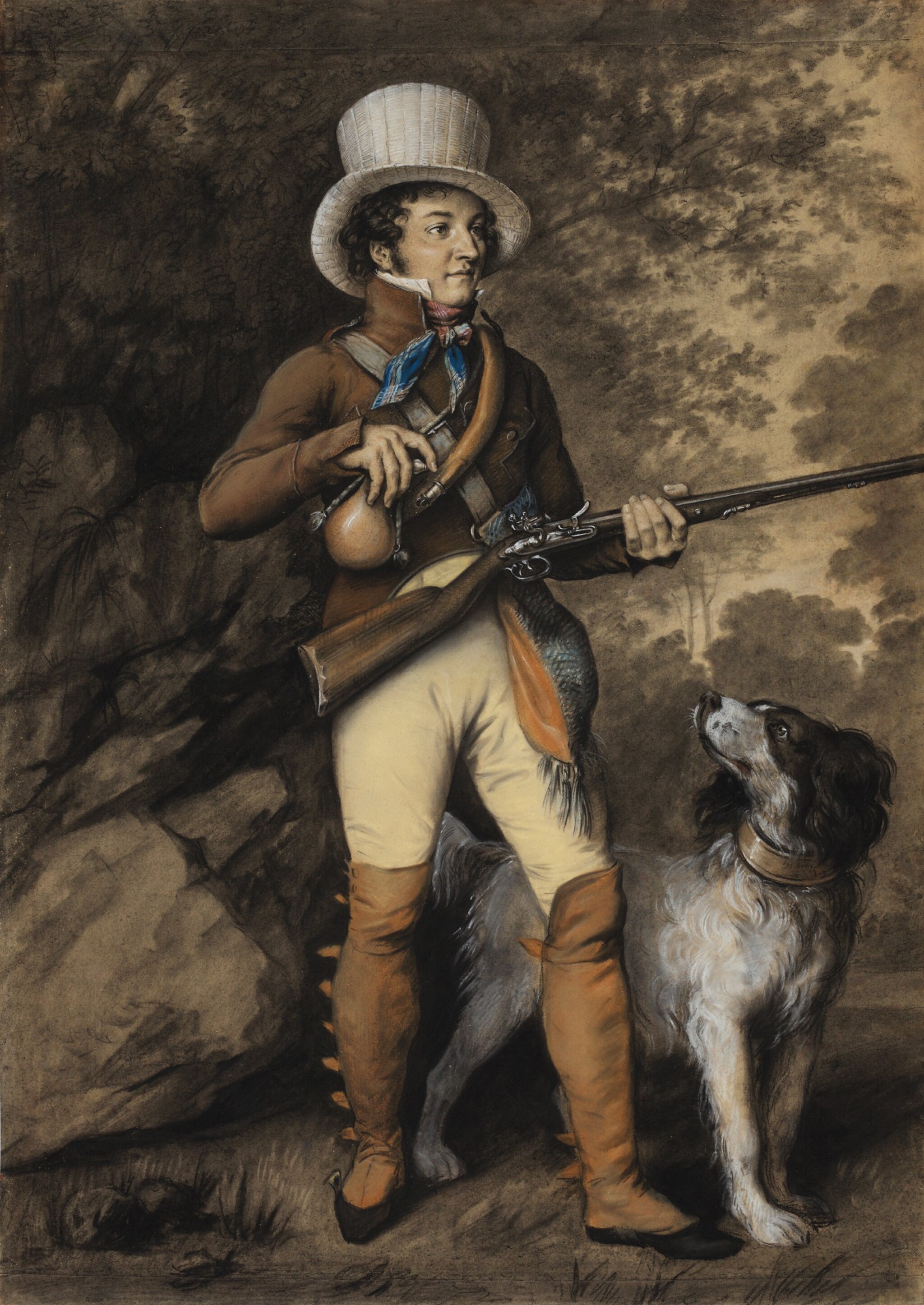 PORTRAIT OF A HUNTER AND HIS DOG, TRADITIONALLY IDENTIFIED AS THE ARTIST LOUIS BOILLY, IN HUNTING COSTUME

signed and dated on the dog's collar: Jul. Boilly/1819 and inscribed on the etiquette of the old frame: Jules BOILLY/Portrait de L. BOILLY Peintre

The sheet is laid down to an old backing which has subsequently been hinged with acid free japan paper to a modern card backing. The sheet has been extended by an inch to both the top and bottom of the drawing by the artist. There is some minor toning to the sheet however the combination of media remains in absolutely delightful condition throughout, with the image strong and vibrant and the detail in areas such as the face, extremely refined. Sold in a decorative giltwood frame.

"This dashing portrait, the subject of which is traditionally identified as the artist’s father, Louis Leopold Boilly, is an extremely fine and unusually large example of Jules Boilly’s work as a draughtsman. The use of pastel in addition to black chalk and the exceptional level of detail achieved in both the hunter and his obedient hound, coupled with the smoky, atmospheric handling of the landscape, make this work arguably the finest to survive from the artist’s drawn oeuvre."

In this large and beautiful pastel, an elegant and distinguished-looking hunter is shown walking through a wood, holding in his left hand his rifle while his right hand rests on a powder flask. He wears a large ‘chapeau de paille de forme tromblon,’ as the 1907 sale catalogue records. His chocolate-brown hunting jacket contrasts smartly with his chamois-colored moleskin trousers and leather leggings, and is set off with a colorful blue, red, and white silk scarf tied loosely around his neck. The sartorial details of his dress, stylish and swagger, suggest that this is very much a ‘fancy’ picture. The hunter appears as though he has just spotted prey. His dog turns and stares at his master in readiness. The sitter traditionally has been identified as the artist’s father, Louis-Léopold Boilly (1761-1845), painter of manners and morals at the turn of the nineteenth century. Following the inscription on the etiquette of the original frame and the 1907 sale catalogue, Paul Marmottan, art historian and collector of Boilly, first published the drawing as Portrait de Louis Boilly, peintre in his 1913 monograph on the artist.1 The pastel has not been seen for over a hundred years since it last appeared at the Hôtel Drouot in 1907, and its recent re-discovery gives scholars an opportunity to study an important addition to the already well-known images of the artist. While the identification of the sitter as Boilly père appears to be correct, further research may yield more information.2 Regardless, the present sheet is the masterpiece of the young Jules.

Though Boilly was not a sportsman, the physiognomy of the subject is remarkably similar to other, recorded portraits of him, as is his apparent age (Boilly would have been 58 years old in 1819). Boilly was famously near-sighted and often, though not always, portrayed wearing spectacles. For a grand drawing such as this, intended as a whimsical portrait of the artist’s father in fancy dress ("en costume de chasseur," as the 1907 sale catalogue describes it), it is possible that his son deliberately decided to portray his father without spectacles as a concession to vanity. Further, the pastel Self-Portrait (1819) of Louis Boilly, made the same year as our drawing and today in the museum at Boulogne-sur-Mer,3 equally shows the painter without his spectacles. In the Boulogne Self-Portrait, described by his first biographer Henry Harisse as “un pur chef d’œuvre,”4 the artist portrays himself wearing a black top hat, tightly gripping his curly hair, and soberly dressed in a dark-blue overcoat trimmed with black velvet. There is a look of fatigue in his features in the Boulogne pastel, perhaps resulting from the death of his second wife earlier that year, Adélaïde, the mother of Jules.

Jules Boilly studied drawing with his father before entering the studio of Baron Gros (1771-1835) at the Ecole des Beaux-Arts, where he assiduously copied the Old Masters. He quickly became a master draughtsman and lithographer, and was responsible for portraying all the members of the academy between 1822 and 1825 in his Iconographie des membres de L'Institut de France. Boilly left for Rome in 1826 and traveled through southern Italy with his friend, the poet and dramatist Casimir Delavigne (1793-1843), and his brother, Germain Delavigne (1790-1868), dramatist and librettist. As a result of this journey, Boilly returned to Paris with nearly 50 oil sketches and 100 drawings and watercolors.5 He exhibited for the first time in the Salon of 1827 with his debut submission, Des paysans des Etats du Pape, allant à Rome faire leurs dévotions dans l'année du jubilé de 1825, aperçoivent de loin le dôme de Saint-Pierre, for which he was awarded a gold medal. He continued to exhibit regularly at the Salon until 1865.

Jules Boilly had a passion for two painters, Murillo and Prud'hon, and replicated their work in drawings, prints, and paintings, precise copies that were difficult to distinguish from the original. He also made several portraits of Prud’hon as an old man. Boilly was exceptionally sophisticated and well-educated, spoke seven languages, translated Persian poetry, and was an avid billiards player, travelling across Europe with his cue stick. Like his father, he excelled at portraiture, generally small in scale, which he made in black chalk, occasionally heightened with pastel. His sitters included such social, literary, and cultural figures of the Romantic period as the comte de Forbin, Bernardin de Saint-Pierre, Humboldt, Cuvier, Rossini, Georges Sand, Talma, Méhul, and, of course, his father, whose portrait he gave to the Palais des Beaux-Arts de Lille, in 1862.6

2 Etienne Breton and Pascal Zuber, authors of the recently published catalogue raisonné of the works of Louis Boilly (1761-1845), have suggested that our drawing be described as Portrait presumé de Louis Boilly, peintre, en costume de chasseur.