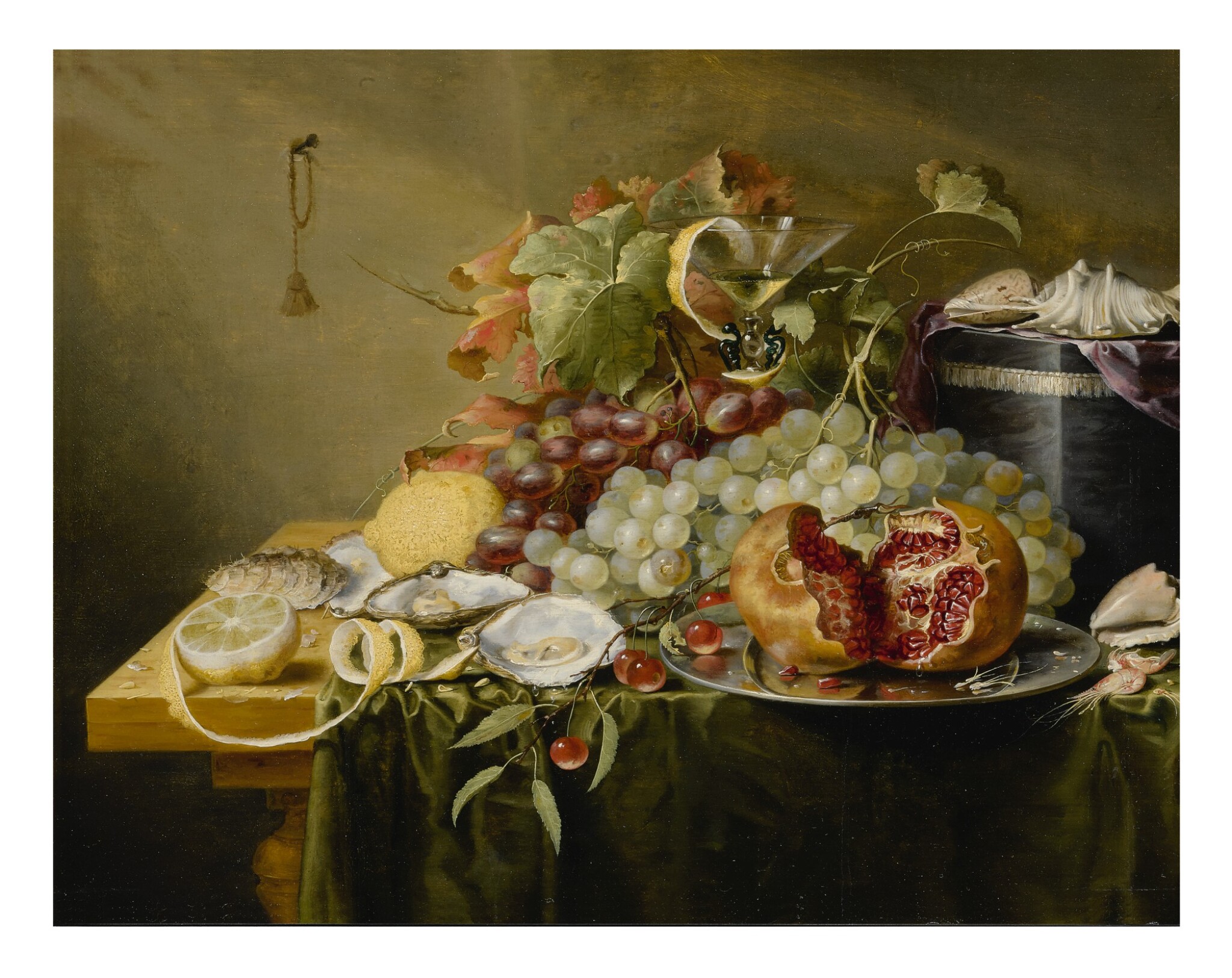 A STILL LIFE WITH A POMEGRANATE AND OTHER FRUITS, OYSTERS, SHRIMPS AND SHELLS ON A VELVET BOX ON A TABLE

The painting is executed on a large single plank of wood which has cradling on the reverse. The painting has been recently cleaned to reveal a beautifully preserved picture. There is strong impasto in the lemon rinds, and deep saturation of color in the reds and greens. Slight areas of thinness are visible in the thinly applied background, though this is not distracting to the overall effect. UV light reveals only a few tiny retouches in the background and in the lower left corner. The painting should hung in it’s current condition. In a carved wooden frame.

" This is a quintessential Dutch pronkstilleven, or sumptuous and ornate still life. Craen is working in the tradition of his Antwerp contemporary Jan Davidsz. de Heem in his bountiful presentation of oysters, pomegranate, grapes, cut lemon and fruit, all set before the viewer on a draped wooden table. A single source of golden light washes over the objects, highlighting their pristine surfaces—they are tangible and alive. Such was the skill of Craen and the best Dutch Golden Age still life painters. This is a signal of the bountiful economic period in the Netherlands during which the picture was produced, and it is a quintessential example of the refinement and technical mastery which are hallmarks of this genre."

Despite being attributed in the past to Jasper Geeraerts (circa 1620- circa 1654), this highly polished and beautifully lit still life is a fine example of the work of Laurens Craen. During a recent restoration Craen's signature was revealed on the table, and indeed the picture bears all of the hallmarks of this important but rare specialist. On the stone table, partially covered by a green cloth, lies a pewter plate set with an open pomegranate, a wine glass à la façon de Venise, lemons, grapes and oysters. A draped velvet box topped with shells can be seen in the background. By gradually toning down the hues, the skillfully and precisely depicted objects seem almost real, the metal appears cold due to the reﬂected shape of light, and the fruit and textiles appear soft. These so called pronkstillevens, or sumptuous still life paintings, were popular in the artist’s lifetime. Laurens Craen is mentioned as being a member of the Middelburg Guild of St. Luke from 1654 to 1664. In a letter to Constantijn Huygens, secretary of the Prince of Orange, dated 14th October 1649, Craen offered his services to the court. There is no record of Craen’s presence in Antwerp in the 1640s, but his work shows similarities with the paintings of Jan Davidsz de Heem (1606-1683/84), who was active in Antwerp at the time. Few paintings by Laurens Craen are known; his earliest dated work is supposed to be from 1635, while the latest dated work is from 1666. In 1984 Sam Segal listed twenty paintings by the artist, of which the majority were signed, but only a small number were dated. This tonal still life is characteristic of Craen, with the illuminated and vertically accentuated projection on a wall or a corner of the room.

Craen’s still lifes, often arranged on a table, portray a table either to the left or right-hand side of the picture, partially draped with a cloth, on which a pewter plate is placed, bearing pomegranates and ﬁsh or crustaceans. This central motif is often accompanied by a partially peeled lemon and invariably by grapes, whose vine leaves are reminiscent of those in the paintings of Balthasar van der Ast (1593-1957). However, unlike van der Ast, Craen chose to render his vine leaves larger and integrates them into the main diagonal of the composition. The leaves trail between the light and the shadow, thus working as an intermediary element between the foreground and the background. Balthasar van der Ast, on the other hand, painted his vine leaves as if they were silhouettes against the background.