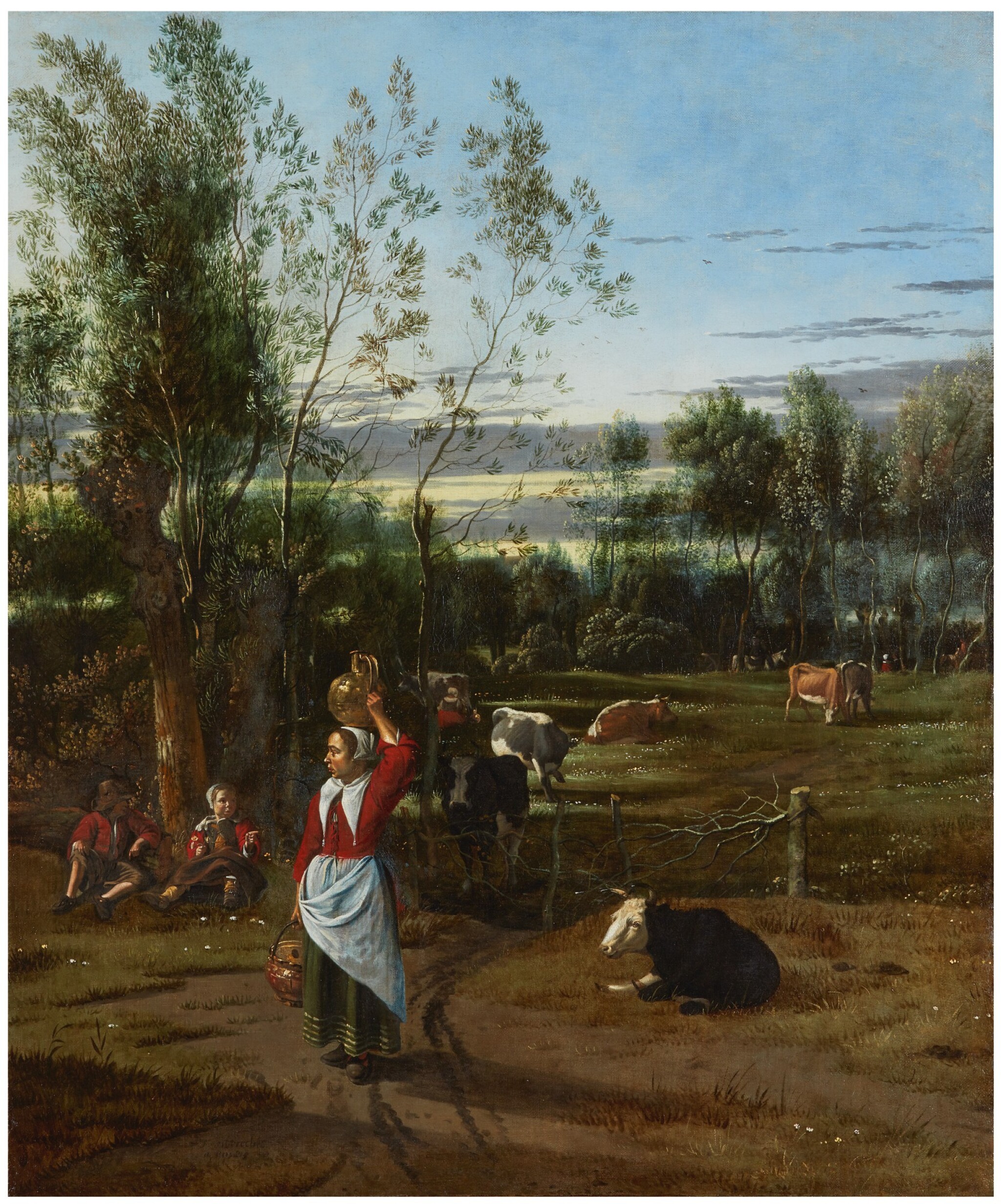 A MILKMAID AND CHILDREN IN A FIELD, CATTLE GRAZING BEYOND

The canvas has been relined. The painting has also been cleaned and restored and could be hung in it’s current condition. There is some thinness in the mid-green tones of the trees, but the sky is refreshingly very well preserved, which is unusual for a Dutch landscape of this age. UV light reveals one repaired vertical canvas tear approximately nine inches long located in the lower left quadrant of the painting. It is repaired well and not overly perceptible to the naked eye unless with strong raking light. Overall, in quite good condition. In a carved black ebonized frame.

"Jan Siberechts’s coolly naturalistic landscapes are unique in Flemish landscape painting, perhaps because he learned from migrant Dutch Italianate painters en route back from the South. This one, in which a milkmaid casts a long shadow as she carries a jug of milk home from the last milking of the day under a serene early evening sky, the leaves on the willows and poplars catching the light from the setting sun, is particularly pleasing. It has a beguiling stillness and monumentality."

Jan Siberechts lived in Antwerp until 1672, the year in which he probably settled in England. Siberechts may have visited Italy prior to becoming Master of the Antwerp Guild of St. Luke in 1648 or 1649. The artist’s early works reveal the inﬂuence of Dutch Italianate landscape painters such as Nicolaes Berchem (1621/2-1683) and Karel Dujardin (1626-before 1678), whom he may have met in Rome. In 1670, when George Villiers, the second Duke of Buckingham, whilst on business in the southern Netherlands came across some of Siberechts’ work, he was so enamored by what he saw that he invited the artist to come to England and help decorate his Italianate mansion, Cliveden, which the Duke had built six years earlier. This mansion was situated on the bank of the River Thames near the town of Windsor. Siberechts agreed to move to England in 1672 and became just one of the hundreds of Dutch and Flemish artists who came to Britain in the seventeenth century to ply their trade. Numerous painting commissions from the aristocracy followed. With his topographical views he stands at the forefront of the English landscape tradition. Siberechts worked in the early 1660s on a number of paintings depicting Flemish rural life and the rustic life of its peasants. The present painting is a beautiful example from this period, before the Duke of Buckingham’s invitation to work in England. This pastoral scene belongs to a group of works in which Siberechts synthesizes landscape and genre painting, depicting the tranquility of a golden summer’s evening, when nature and human activity tend to come to a halt. In this group, the ﬁgures introduced into the foreground of the landscape settings are larger, and, standing out against the brightly lit countryside, they take on paramount importance. As illustrated here, these scenes often depict peasant women going about their daily tasks, carrying produce, accompanied by their livestock. The focus here is on the girl in the foreground, a milk jug upon her head. This round jug on a girl’s head is one of the artist’s favored motifs, featured in many of his landscapes from his Antwerp period. We do not immediately notice a peasant girl seen from the back as she milks a cow, while in the right background people are walking and riders on horseback can be seen. The bright blues, whites and reds of the ﬁgures’ clothing stand out against the verdant earth colors of the background, complementing the overall harmony of the silvery-green palette of the painting.

A comparable painting is in the Hermitage in St. Petersburg. Here, as in many other works by the artist in the second half of the 1660s, he achieves astonishing precision in his depiction of people and objects in the foreground. Although painted in England in 1678, the present painting is closely related in style, treatment of color, as well as in subject matter to Landscape with Figures in the Musée des Beaux-Arts, Bordeaux. In his early work Siberechts concentrated mainly on the landscape with its pastureland, woods, countrywomen and cattle. His later work mainly consists of topographic views of country houses and their surroundings, in which the ﬁgures become less important to the overall effect of the landscape.