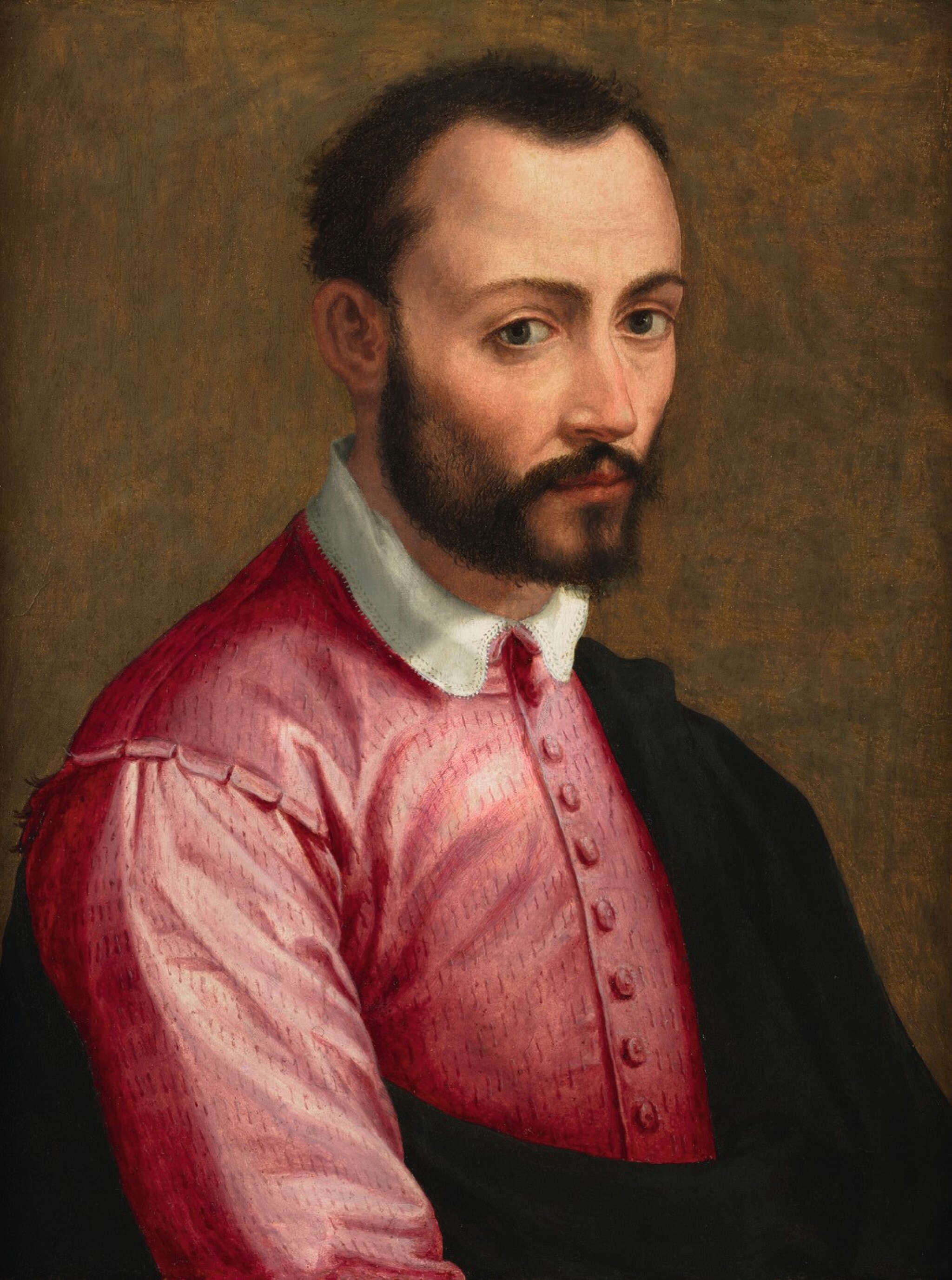 Painting is executed on a single plank of wood which is flat, stable, and uncradled. While there appears to have been a horizontal batten inset to the panel in the past, it no longer remains and does not appear necessary. Overall the picture presents well to the naked eye—the picture is clean, and the varnish is even. UV light reveals a few scattered retouches along the bridge of his nose and forehead. A couple of retouches are also visible in his beautiful red shirt, namely in the sleeves and one small concentrated aea in his chest. These are applied well and are not at all disturbing to the naked eye. The picture could easily be hung in its current condition. In a carved gilt and painted wood frame.

"This portrait presents an image of an elegant young gentleman, but it is only with the knowledge that it portrays Francesco de’ Medici, the heir of Grand Duke Cosimo I, that we are able to grasp Coppi’s subtle and incisive understanding of his sitter. Coppi was one of the team of artists that Francesco worked with to create his famous Studiolo, and this picture shows that the artist was more than familiar with the character of his subject, an inquisitive, imperious and brittle young man. With none of the Medicean pomp of an official portrait, this painting captures a part of the prince’s personality that would normally be hidden to us today."

Francesco I de’ Medici was the second Grand Duke of Tuscany and ruled from 1574 until his death in 1587. Francesco levied high taxes on Florentines and could be despotic at times, but he also supported the development of the arts and sciences. In 1570, Francesco commissioned a group of artists, under the supervision of Giorgio Vasari, to decorate his Studiolo in the Palazzo Vecchio. Jacopo Coppi completed two paintings for the ensemble: The Invention of Gunpowder and the Family of Darius before Alexander the Great. Francesco had a close relationship with many of the artists who worked on the Studiolo and patronized them on other occasions; this portrait was likely completed between the completion of the Studiolo in 1572 and the start of Francesco’s reign as Grand Duke in 1574, as it lacks any emblems of power associated with that office and the Medici. The portrait was thus intended for a private viewing context.

Shortly after his work on the Studiolo, Coppi received 3 commissions for altarpieces in major Florentine churches: The Pentecost for the Pieri altar in San Niccolò Oltrarno; The preaching of St. Vincent Ferrer for the Attavanti altar in Santa Maria Novella in 1574, and an Ecce Homo for the Zati altar in Santa Croce in 1576. The 1570s would be the most productive period of Coppi’s career. He also painted frescoes in San Pietro in Vincoli in Rome as well as commissions for a few Bolognese churches. Although Coppi was not known primarily as a portraitist, Carlo Falciani, to whom we are grateful, has confirmed the attribution of this painting to Coppi on the basis of comparison with donor portraits included in some of Coppi’s altarpieces.

All proceeds to be donated to ChefsForAmerica COVID –19 Response, a subsidiary of Chef José Andrés’ World Central Kitchen, a relief effort to feed people who are victims of the financial strains due to the coronavirus. To donate, please go to https://wck.org/