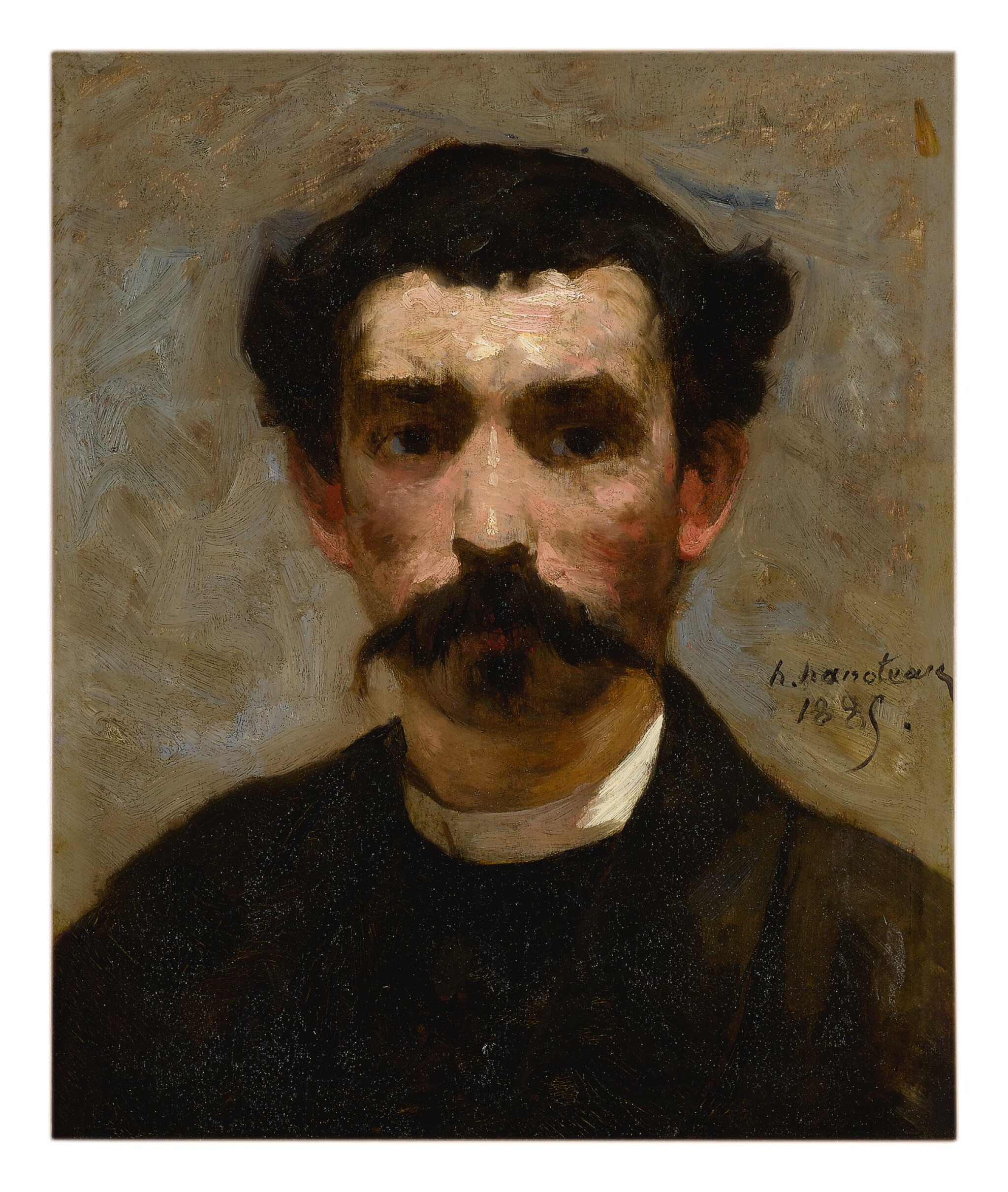 PORTRAIT OF A MAN WITH A MUSTACHE

The panel is flat and uncradled. The image reads well and leaves a strong impression. The background is loosely painted, and it seems that the ground is somewhat visible in areas. There is a slight inconsistency to the surface near center of the lower edge. Under UV: The varnish is thick. Some possible retouches are visible in his face and neck, and some strengthening appears in the darker shades of the mustache and hair. In these areas, the varnish also fluoresces somewhat unevenly. There are some scattered small pin dots of restoration here and there in his costume Offered in a simple wood frame.

"Despite this being a sale of predominately Old Masters, I’m very happy that we can show a range of works that extend well into the 19th century. This is such a modern portrait, incredibly piercing and yet casual at the same time. I imagine that Hanoteau knew this man well- perhaps he was a fellow artist working in the circle of Courbet in the 19th century. The spontaneity and confidence of the brushstrokes is wonderful."

Born in 1823, Hector Hanoteau grew up comfortably in the central French town of Decize. He began painting at a young age, moving to Paris in 1841 to work under Charles Caïus Renoux (1745-1846). After Renoux’s death, he joined the workshop of Jean Gigoux (1806-1894) while attending the École des Beaux-Arts. While he initially focused on genre painting, he quickly developed a passion for landscape—a love no doubt encouraged by his friendship with Gustave Courbet, whom he first met while in Gigoux’s workshop. Hanoteau and Courbet remained close throughout their careers, even collaborating together on occasion, most notably in their Baigneuses of 1858 (fig. 1), and it was through Courbet, that Hanoteau was introduced to a number of other painters, including Victor Hugo, Charles Baudelaire, Theodore Rousseau and Honoré Daumier.

Hector Hanoteau was renowned during his lifetime. From 1847-1889, he annually participated in the Paris Salon, where he was met with high praise and won countless accolades. In 1870, he was awarded the greatest honor, the Cross of the Légion d’honneur, and in 1889 he received a first-class medal at the Exposition Universelle in Paris. Aside from all of this success, he also founded a school of painting in Briet, Cecry-la Tour, where he was elected mayor in 1870. Throughout his career, Hanoteau remained influential among his peers and students, never ceasing to surround himself with zealous members of the bohemian creative milieu and continually practicing a collaborative and interdisciplinary approach to painting and teaching.

Although the identity of the mustachioed sitter in the present portrait remains unknown, it is likely one of Hanoteau’s many pupils. It may be a young Louis Mathieu Poussereau (1855-1931), who studied with Hanoteau from 1879 until the artist’s death in 1890. Poussereau was a gifted and ambitious archaeologist, historian and poet who was drawn to painting through his close ties with members of the Nevers Artistic Circle.