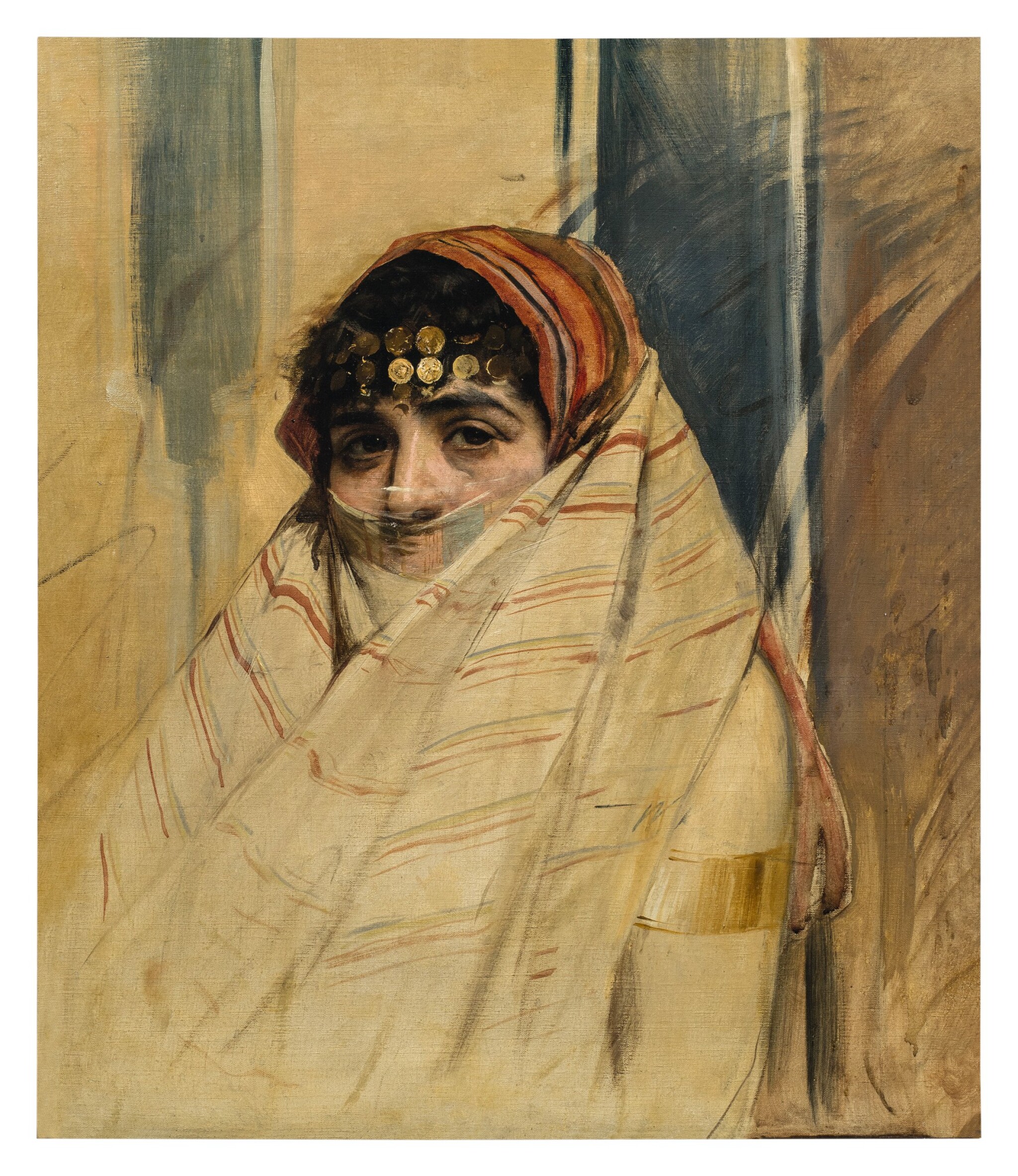 PORTRAIT OF A VEILED WOMAN

The canvas appears to be unlined and is stable on its stretcher. The overall image reads well overall, and there is still a lovely retention of impasto in the jewelry on her forehead. As a sketch, the face and head of the figure is more fully realized while the costume and background are more loosely rendered. Under UV: Some strokes of retouching visible in her face, around her nose and in the shadows of her eye. A 1inch spot of retouching near lower center, two thin lines right below that spot, some strokes near the lower edge, and a spot in the blue of the background at upper right. There are a few fine and scattered retouches in her upper veil at right, and otherwise, only a few scattered feathered strokes here and there. There may be some strengthening in the background along the right edge. The painting can hang in its present condition. Offered in a dark frame with carved decorative detail.

"Kossak was one of the innumerable European artists enchanted by the Middle East and Asia during the 19th century. The popularity of “Orientalism” in the Western canon is oftentimes characterized by romanticized and amalgamated images of exotic locales, fashions and people. Here, Kossak offers a mysterious and seductive portrait of a veiled woman gazing directly at the viewer. Who is she? Is this a portrait from life, or a fleeting memory from Kossak’s trip? I happen to love the quick, sketch-like character or the painting, which was a hallmark of the artist."

This striking and seemingly spontaneous oil sketch of a veiled woman was painted by the Polish artist Wojciech Kossak, whose artistic renown stretched far beyond his native land. The sketchy yet carefully detailed technique used here was a hallmark of his style, though such reserved subjects were rare within his typically theatrical oeuvre, which largely consisted of dramatic history paintings. That it is subtly monogrammed with his initials rather than his full name suggests this work may have been intended as a more personal or private endeavor rather than a commission.

Kossak came from a family of artists, as the son of the painter Juliusz. Kossak and the godson of famed battle painter Horace Vernet. He trained in Paris at the École des Beaux-Arts under Alexandre Cabanel and Léon Bonnat, and also studied at the Krakow School of Fine Arts. From 1874-1876, he attended the Academy of Arts in Munich, where he joined a network of hundreds of Polish expatriates and where he found lasting support for his large-scale history scenes. Among his friends here were the artists Tadeusz Ajdukiewicz, whom would greatly influence Kossak, and Michael Gorstkin Wywiórski. Kossak was one of the more than sixty Polish artists who travelled to the Middle-East in the 19th and early 20th centuries, and in 1900 he traveled with Wywiórski to Egypt, where he may have completed the present sketch.