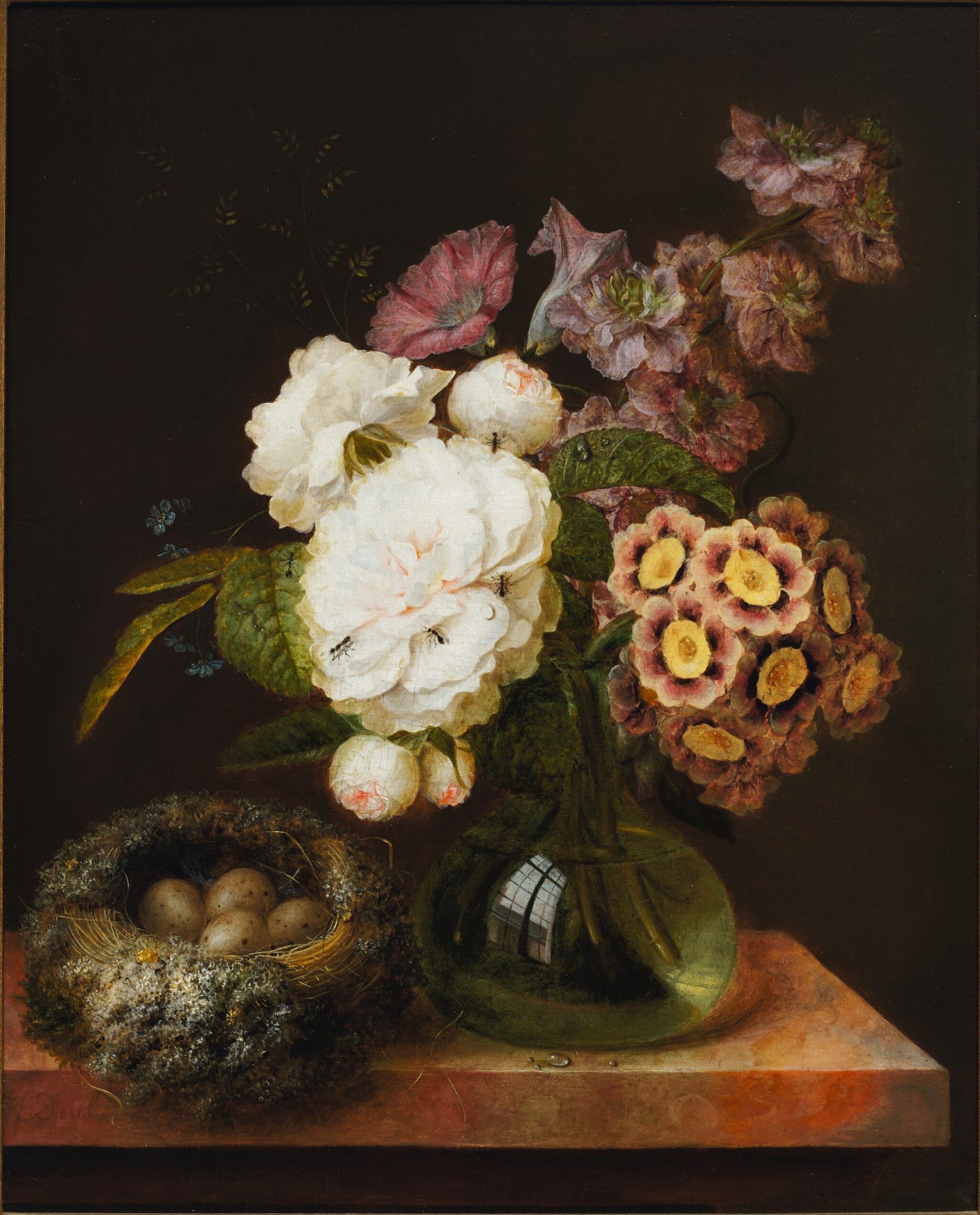 The painting is executed on a beautiful single oak panel which is flat, stable, uncradled, and beveled on the reverse. The paint layer is clean and bright, and the picture could be hung in its current condition. UV light reveals some possible strengthening in the shadows of the greens of the flowers, as well as a small area at the right side of the bird’s nest. The picture presents very well to the naked eye. In a carved giltwood frame.

Private collection, Amsterdam, until circa 1990, when bought by;

"I certainly tend instinctively to see extravagant still-lifes of bouquets of flowers like this as quintessentially Dutch, and totally 17th-century in taste, forgetting how enduring and widespread was the demand for paintings of this type. Ziesel clearly made a very successful career for himself painting these still-lifes for a late 18th/early 19th-century Parisian audience, who must have delighted both in the beauty of his compositions and in the refinement and variety of his touch."

Joris Frederik, later known as Georges Frédéric Ziesel, was born in Hoogstraten, Flanders in 1756. Although he was one of the most prominent still life painters in Flanders at the time, little is known about his life. At the age of fourteen, Ziesel became an orphan and settled in Antwerp. It is unclear whether he received his training at the Academy in Antwerp as his name is not found in any of the registers. His colleagues Pieter Faes (1750-1814) and Balthasar Paul Ommeganck (1755–1826) both studied at the Academy, perhaps an indication that he was somehow affiliated with the school. Ziesel married in 1780 but remained childless throughout his life. He spent and worked a good part of his career in Paris where he exhibited at the Salon of 1802. Upon his return to Antwerp, he was included in the Salons of 1805 and 1809. Ziesel died in Antwerp on June 26, 1809. Ziesel painted still lifes on panel as well as on glass, a technique he must have learned in France. Paintings by Ziesel are quite rare, always depicting table top still lifes of floral arrangements in vases on a marble ledge. Sometimes enhancing his compositions with fruit; in the present floral still life the accompanying object is a tender depiction of a quail's nest with its fragile quail eggs. Ziesel’s paintings reveal a close kinship to his better-known contemporary Cornelis van Spaendonck (1756-1839), who also trained in Antwerp and then moved to Paris.