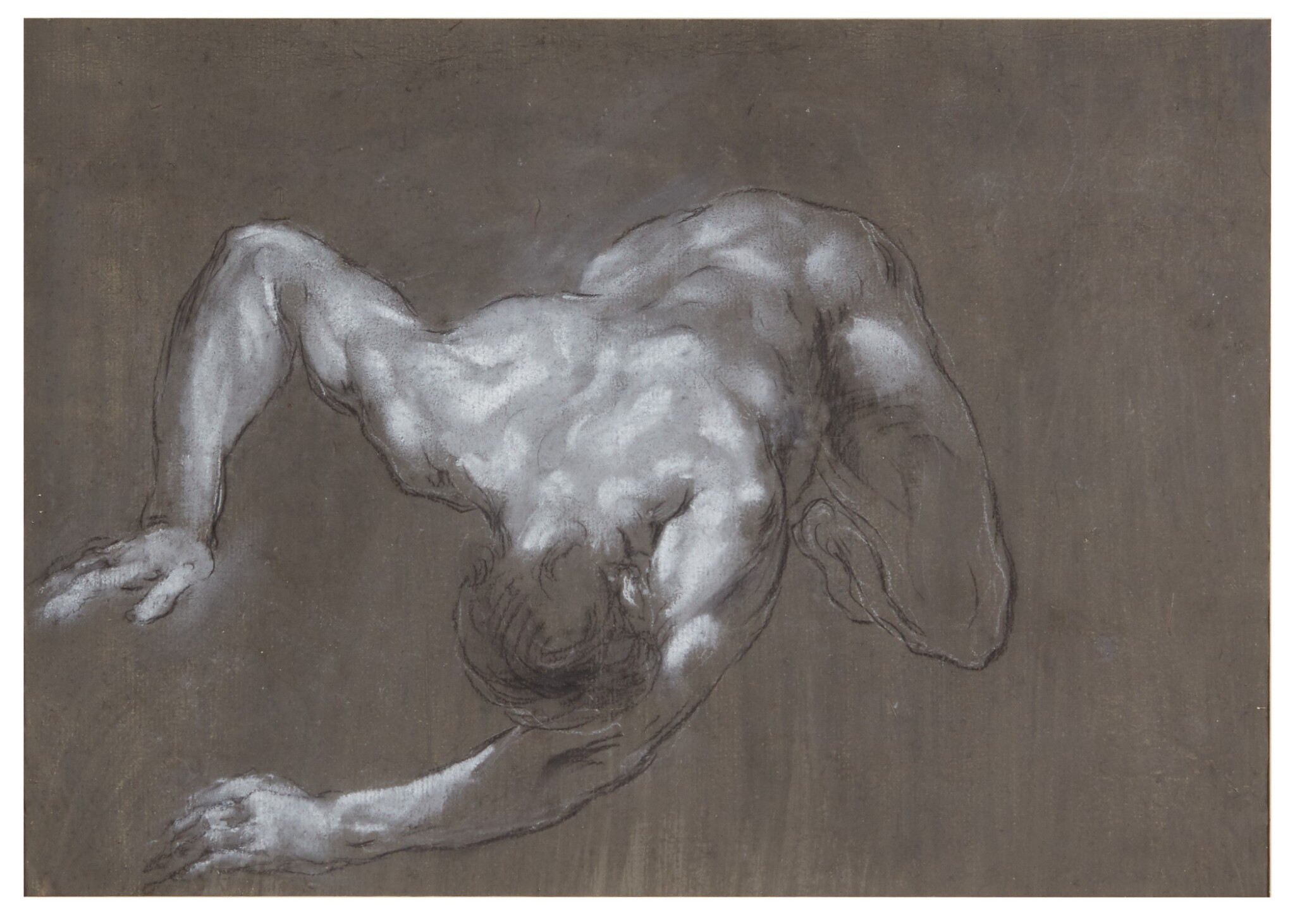 RECTO: A CROUCHING MAN, SEEN FROM ABOVE

Window mounted on japan paper which has in turn been hinge mounted to a modern decorative mount. The new mount covers a small proportion of the four edges of the sheet. The four edges are a little uneven and there are some minor creases to the right edge and a few small pin prick holes to the left edge, as one would expect from a working drawing of this nature. The drawing itself is in very good condition, with the combination of media fresh and vibrant. There is a small square loss to the upper right corner which has been sensitively restored and is only really evident when examining the work from the verso. Sold in a modern giltwood frame.

"The complex pose and contorted musculature found in this robust and beautifully preserved sheet by the Bolognese born artist, Francesco Monti, lends a strong sense of physical tension to this dynamic Academy study. The sculptural, luminous effect that the artist has achieved, through the careful application of white chalk on dark gray prepared paper, further heightens this sense of drama."

A particularly beautiful Academy by Francesco Monti, taken from life, this powerful and perfectly preserved drawing was probably intended for a repoussoir figure in the foreground of a multi-figure composition, perhaps for a man wounded in battle. The pose is highly unusual for an Academy. The drawing stands firmly in the Bolognese academic tradition, first established by the Carracci Academy at the end of the sixteenth century and still the predominant model throughout Europe in the eighteenth century, to study the human figure in all its poses from the living model. Apart from presenting an unusual pose, the present work reveals Monti’s particular interest in the effects of lights and shade on the man’s back musculature. To enhance these effects he used white laid paper that was first carefully prepared on the recto with broad brush strokes in dark-grey wash as a mid-tone color against which to set off the brilliant white chalk highlights and dark black chalk contours. Monti’s approach is eminently painterly, and in some areas he stumped and rubbed the white chalk into the paper to enhance the three-dimensionality of the figure as well as to better isolate the subject against the background.

The overall highly painterly effect of this study suggests it was made relatively early in Monti’s career when he was strongly influenced by Venetian art. Several comparable Academies survive in the Accademia Carrara, Bergamo, which preserves the largest holding of drawings by the artist, the Uffizi, and in various other public and private collections.1 Particularly close in size, style, and subject matter, possibly showing the same model, is a drawing by Monti in a private collection in Munich (fig. 1). The rich use of white chalk can also be found in highly finished composition drawings by Monti in the Royal Library, Windsor.2 As a pupil of Sigismondo Caula (1637-1724) of Modena, who trained in Venice, and later of Giovan Gioseffo dal Sole of Bologna (1654-1719), Monti was strongly influenced by Venetian art – indeed he worked there in the 1720s - so much so that Ugo Ruggeri, author of the seminal monograph on the artist, once described him as a ‘falso veneziano’ (‘a faux Venetian’).3

Francesco Monti began his artistic training with the Venetian trained painter Sigismondo Caula in Modena before moving to the Bolognese studio of Giovan Gioseffo Dal Sole, which he joined in 1703. The Venetian traits in Caula’s art would remain a component of Monti’s production throughout his long and prolific career. His first documented work, the Pentecoste for the church of S. Spirito in Reggio Emilia (now in S. Prospero) dated 1713, already shows Monti’s aspiration to autonomous expressive modes. The 1720s were marked by important history painting commissions and in 1725 he was elected to a term as principe of the Accademia Clementina.4

By the mid-1720s Monti moved to Venice, where he contributed five canvases to a series of large allegorical paintings of imaginary tombs commemorating prominent British noblemen. Commissioned by the Irish entrepreneur Owen McSwiny in the late 1720s and 1730s, the project also involved Donato Creti, Sebastiano and Marco Ricci, Giambattista Pittoni and Piazzetta among others.5 In the early 1730s he received several commissions for churches in and around Bologna, including the Immaculate Conception with SS. Filippo Neri and Barbara for the Oratorio dei Filippini, Bologna (now in the Pinacoteca Nazionale). The 1736 fresco decorations for Palazzo Martinengo, now lost, and those for the church of S. Maria della Pace secured Monti’s success in Brescia. Having settled there, he would spend the latter part of his career working on large-scale fresco commissions in Lombardy – primarily Brescia, Cremona and Bergamo – often in collaboration with the quadraturista Giovanni Zanardi (1700-1769). Monti is best known today as a highly accomplished draughtsman. His numerous black chalk figure studies and red chalk compositional drawings combine a strong emphasis on the assiduous observation of the human form, typical of the Bolognese academic tradition, to a distinctive lightness of touch, producing a rare ‘combination of elegance and spontaneity.’6