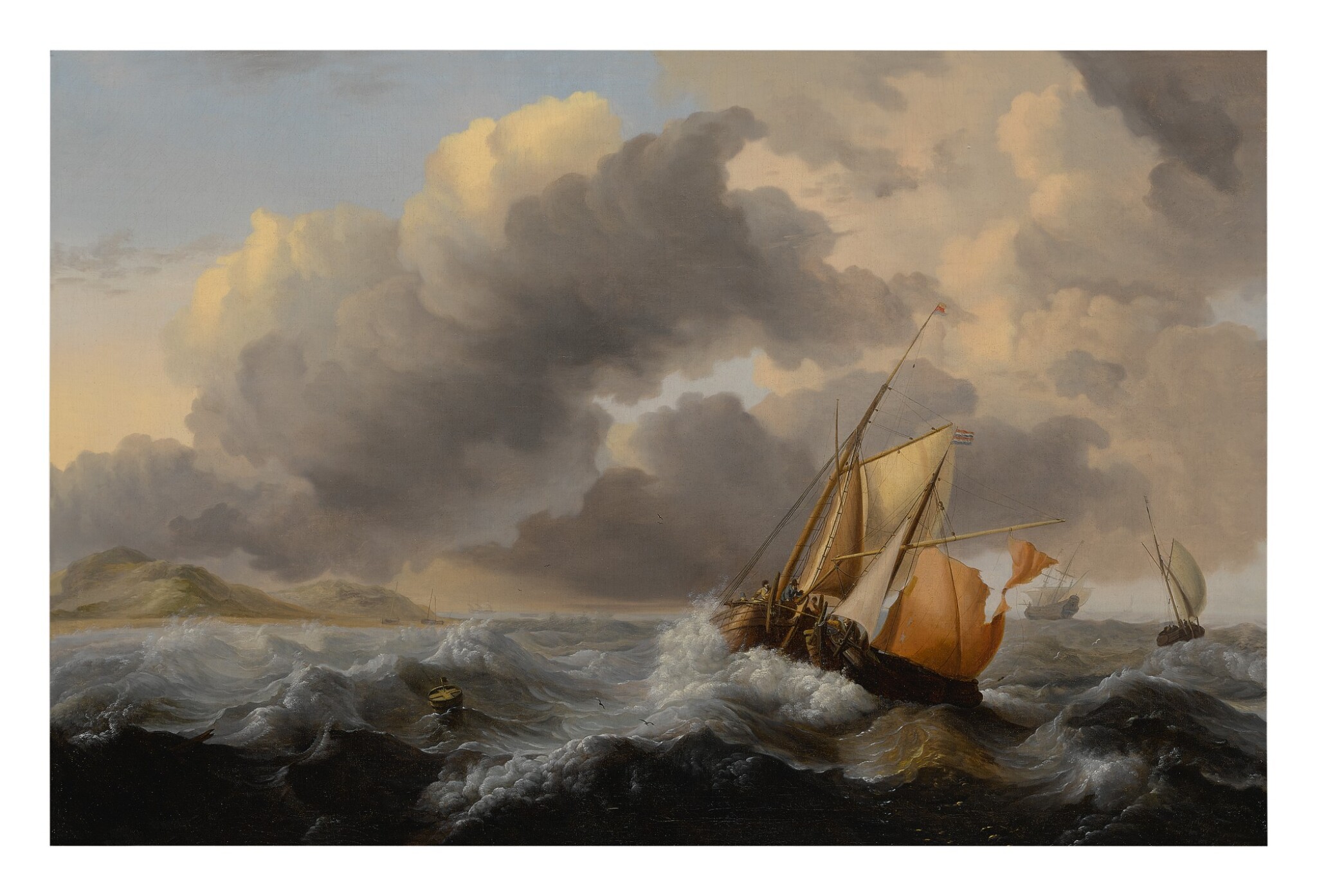 SHIPS IN A STORMY SEA, WITH A DUNE COAST BEYOND

The canvas is unlined, although the edges are reinforced, and it is stable on its stretcher. There are two old areas of repair visible on the reverse, which correspond to the lower left corner of the painted image. The painting appears to be in lovely condition overall, with good retention of detail. Some of the darker shadowy tones in the waves along the lower edge, and towards the right half of the ship, have lost some definition with age, but this in no way distracts from the overall impression. Under UV: The aforementioned repairs in the lower left background/sky fluoresce. There are very fine strokes of well-applied inpaint scattered here and there, to address old craquelure. Some strengthening is visible in the shadows along the lower edge and in the boat. There is one very thin retouched repair in the brown sail at left, as well as a spot in the more orange sail at right. Otherwise, much of the scattered retouching is localized here and there in the sky: one spot near the center of the right edge, two retouched scratches in the upper right, and a few other scattered spots and strokes in the sky. These retouches are all well-applied and are not distracting. The painting is ready to hang. Offered in a dark modern molded Dutch 17th Century style frame.

"The Dutch Republic’s maritime empire was its source of wealth and many men risked their lives on ships that could be caught in storms like this one. I like studying the waves in detail because each artist of seascapes depicted them differently. Here, the shapes of the clouds also echo the rough waves."

This luminous seascape by Jan Claesz. Rietschoof, one of Ludolf Bakhuizen’s most accomplished pupils, radiates a mesmerizing effect that transports viewers to the choppy and stormy waters of the North Sea. A soft and warm light draws attention to the vibrant sails of two single-masted ships near the center of the scene, on the left a smalship and on the right a kaag. The torn sale of the kaag as well as the dangerously close proximity of the ships within the turbulent seas suggests this is a rescue operation. To the left of these ships floats a wooden buoy, and in the distance beyond is a peaceful coastal dune landscape, possibly the island of Texel, with two ships banked on the shore. In the distance at right are two additional ships navigating the strong winds and surges of the water. Ludolf Bakhuizen's Fishing Vessels Offshore in a Heavy Sea, signed and dated 1684 and today in the Minneapolis Institute of Art,1 served as the model for the present canvas by Rietschoof. While copies and variations of this scene by other artists are known, the present example by Rietschoof comes closest to Bakhuizen's original in quality and execution. Rietschoof likely saw Bakhuizen's prime in his teacher's workshop and completed his version in the following year, 1685. His distinct hand is visible in the more ornamental rendering of the clouds as well as in the reddish-brown hue visible through the delicate glazes.

Rietschoof was active in his native Hoorn throughout all of his career, although he may have spent some time in Amsterdam with Bakhuizen. His son, Hendrik, followed in his footsteps and also became a maritime painter. The elder Rietschoof's works are found today in museums worldwide, including the Rijksmuseum and Het Scheepvaartmuseum in Amsterdam, the Westfries Museum in Hoorn, The Hermitage in Saint Petersburg, the National Gallery of Prague, the National Maritime Museum in Greenwich, and the Africana Museum in Johannesburg, among others.

A letter of expertise (dated 5 March 2016) from Dr. Gerlinde de Beer, which forms the basis of this entry, is available upon request.