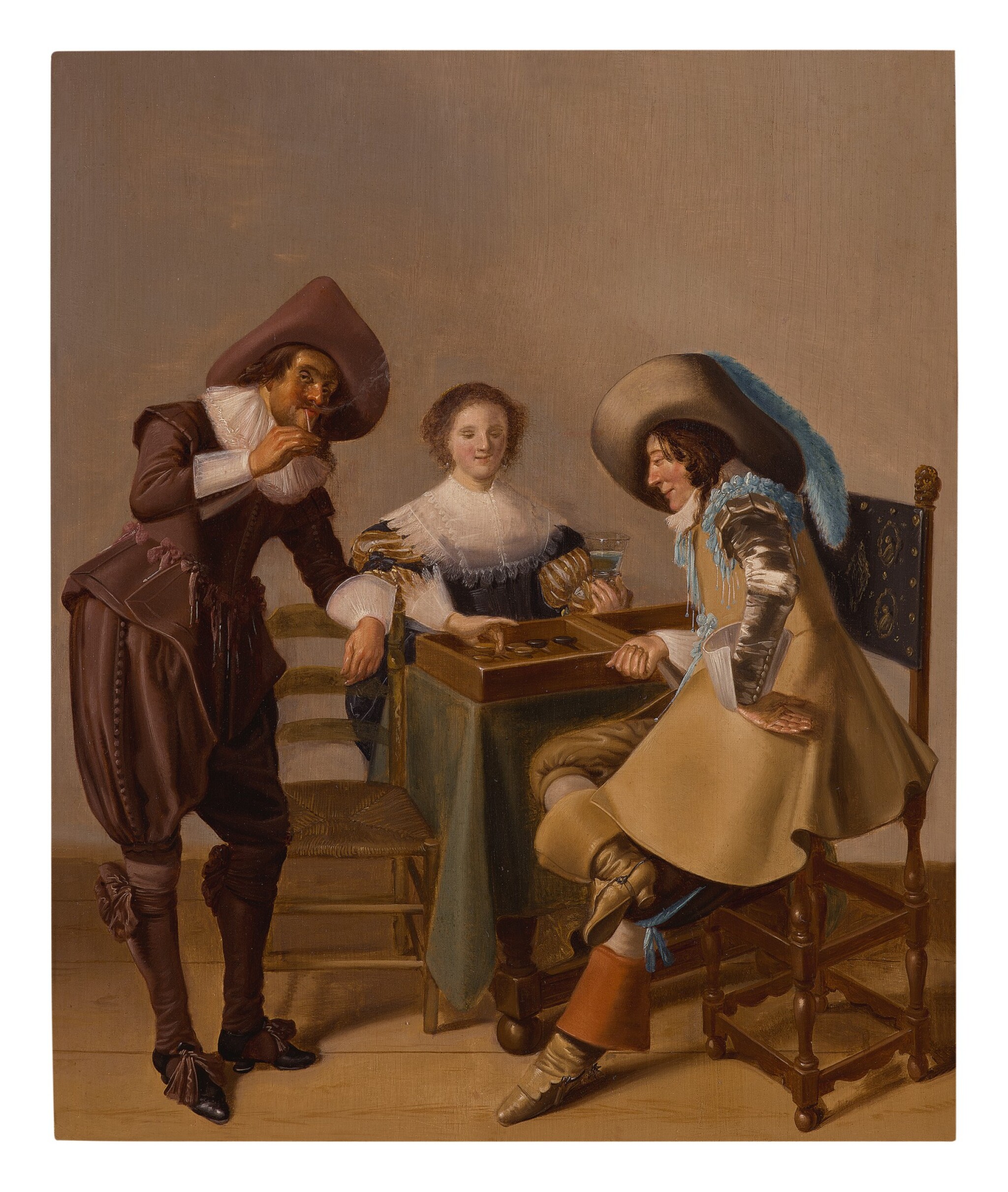 signed with monogram, lower center, on the foot of the table: DH (in ligature)

The panel is flat, stable, uncradled and beveled on all four edges. The painting is in overall beautiful condition and it reads well beneath a crisp varnish. The details and colors, particularly the vibrant tones of the costume of the figure at right, are well preserved. Under UV: not many retouches fluoresce. There are only a few scattered finely applied spots in the background and on the floor, for example above the figure’s heads at center, with other spots concentrated at the extreme edges. The figures remain largely untouched, only two small spots in the figure at left, tiny pin pricks in the central figure, and almost none in the figure at right except for a thin line that extends from the background into the brim of his hat. The painting can certainly hang as is. Offered in a dark wood frame with a gilt liner.

From whom acquired for the Fürstliche Liechtensteinsche Gemäldegalerie (inv. no. 661), 1834;

"A tendency towards a restricted palette and a greater reliance on tone rather than colour is a characteristic that Dirck Hals and other Haarlem genre painters shared with their landscapist confrères in the later 1620s and 30s. This restrained, almost muted picture composed with perfect order and balance is a beautiful and satisfying example of Dirck Hals’s work at this time."

Datable to circa 1630, this convivial gathering of fashionably dressed figures in the midst of a tric trac game is a marvelous example of the work of Dirck Hals. Such genre scenes showing merry-making companies were popular during the first half of the seventeenth century and were amongst his specialties. As here, he often composed these paintings around a centrally positioned table with elegant figures smoking, drinking, or playing games.  Born in Haarlem in 1591, Dirck Hals was the younger brother of Frans Hals. During their lifetime, the brothers were celebrated as equals excelling in different artistic styles.  Samuel Ampzing, writing in 1628, stated, "Come Halses, Come forward and take a place here that rightfully belongs to you./ How nimbly Frans paints people from life!/ What neat little figures Dirck knows how to give..."1  While Dirck's rapid painterly technique and the marvelous treatment of costumes clearly betrays the influence of his older brother, he also drew inspiration from the works of Esaias van de Velde and Willem Buytewech, in particular the latter's elongated figures set within a small format.

Dirck is known to have worked from preparatory figure drawings and oil sketches on paper, a rather uncommon practice for a Dutch artist of this time. This working method helps to explain why figures in similar poses and costumes regularly recur in his works. For example, the seated gentleman in the present work is reminiscent in pose and costume of the figure in a preparatory drawing found today in the Rijksmuseum, Amsterdam (fig. 1), and the arrangement of figures around the table compares to that found in his panel of the same subject, signed and dated 1626, sold in these rooms 26 January 2011, lot 25 (fig. 2).