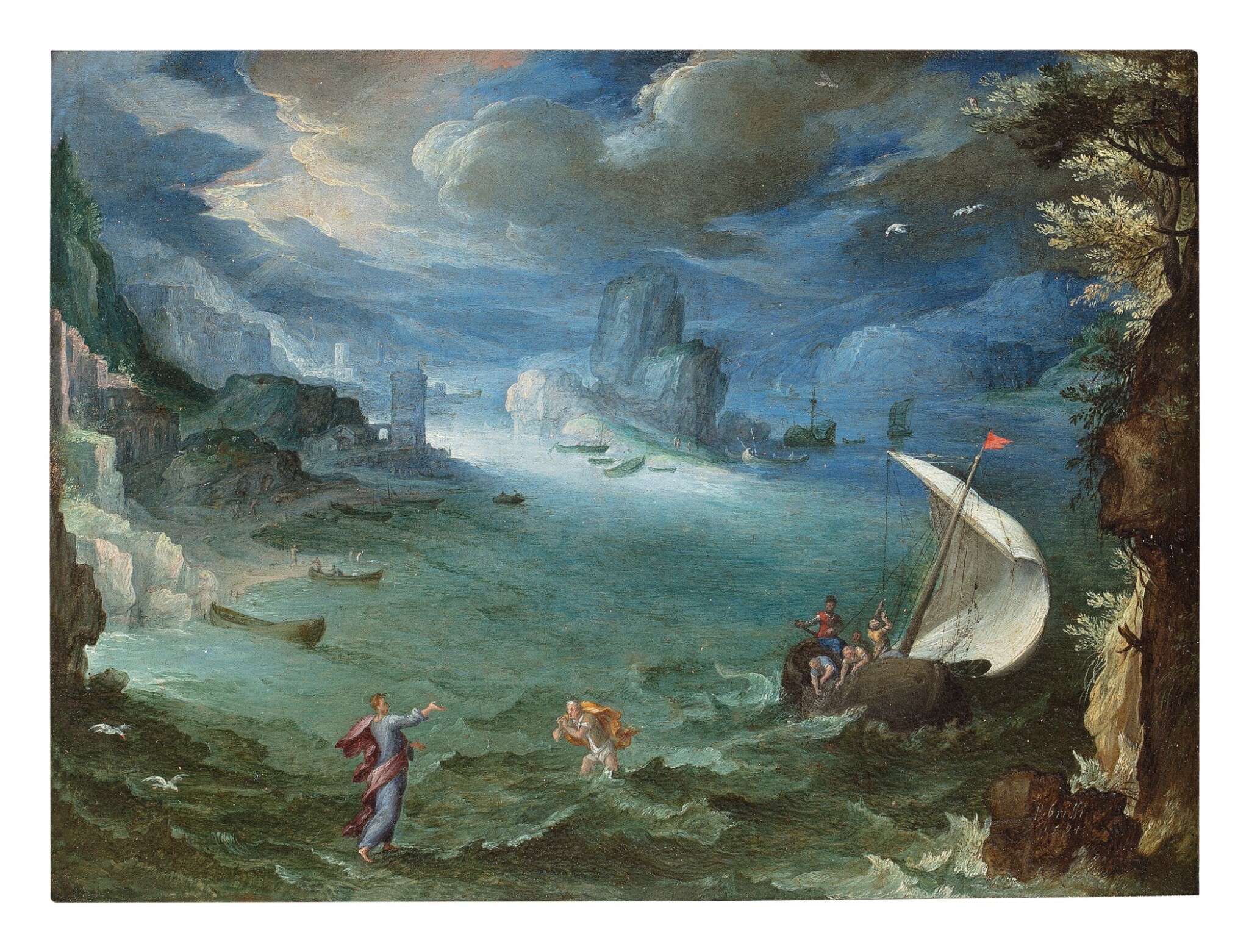 COASTAL LANDSCAPE WITH THE CALLING OF SAINT PETER

The copper panel is flat and stable. It is supported at the edges of the reverse by four pieces of wood. The painting appears to be in good condition overall, with no losses, instabilities or surface scratches. The colors are crisp and vibrant and the details read clearly beneath the varnish. Under UV: the varnish fluoresces unevenly along the right edge. There are only a few scattered tiny spots of retouching here and there in the sky, and a few in the waves in the foreground behind the two central figures. Some scattered small spots of retouching are visible at the edges, for example at center of upper edge and in lower right corner. These retouches are all well applied and appear to be largely cosmetic in nature. The painting can certainly hang in its present condition. Offered in a dark wood frame with simply carved details.

"This is an exquisite picture, which reminds me why Bril is such a delightful painter. A World Landscape depicted almost in miniature, in the Flemish tradition but painted in Rome, it has the full range of human experience – an exotic almost limitless view, lots of weather with shafts of theatrical sunlight, a wave-strewn sea, and a dramatic and miraculous narrative. This picture perfectly exemplifies why Bril was the immediate precursor of Jan Brueghel, by this year already in Rome."

Signed and dated 1594, this Coastal Landscape with the Calling of Saint Peter is an exceptionally fine example of the small-scale works painted in Rome by Paul Bril early in his career. An artist of Flemish origin, Bril, along with Jan Brueghel the Elder, was among the most important northerners working in Italy around the turn of the seventeenth century. He brought to Rome a new and detailed type of ideal landscape painting that would not only be of enormous relevance throughout the ensuing century, but that would also help to form the styles of other itinerant artists in the city such as Adam Elsheimer, Goffredo Wals, and Claude Lorrain. Although Bril was born in Antwerp, he spent the majority of his life in Rome, where he was active from about 1582 until his death in 1626. Here, he secured a variety of commissions throughout his career, one of the most important being a fresco cycle in the church of Santa Cecilia in Trastevere, where he depicted hermit saints praying in wooded landscapes.1 Bril received other prestigious commissions from Pope Clement VIII and Cardinal Scipione Borghese, as well as from patrons outside Rome, including Cardinal Federico Borromeo in Milan, Cardinal Carlo de' Medici in Florence, and Duke Ferdinando Gonzaga in Mantua. Bril's prestige, however, was not confined to Italy alone. His drawings were sent back to Antwerp where they were engraved by various artists and subsequently influenced painters such as Cornelis Poelenburgh and Bartholomeus Breenbergh.

The use of a copper support was ideal for Bril, for it allowed him to display his skillful and detailed brushwork on a small scale, as is abundantly evident in the present work. Here, Christ stands in the foreground on choppy waters, calling for Saint Peter, who walks towards Him from a fishing boat. Bril frames this scene at right with a rocky outcropping bathed in a golden light, and at left with a mountainous coastal landscape whose cool tones extend deep into the distance, drawing the eye into every corner of the impressive view.

Bril explored similar coastal landscapes on a few occasions in the 1590s. One example is today in the Galleria Borghese in Rome2 and another is in the Wallraf Richartz Museum in Cologne.3 Bril would also return to the subject of the calling of Saint Peter on occasion throughout his career, and one of his later examples, signed and dated 1615, is today in the Residenzmuseum, Minaturenkabinett, Monaco.4

We are grateful to Francesca Cappelletti for endorsing the attribution of the present lot.