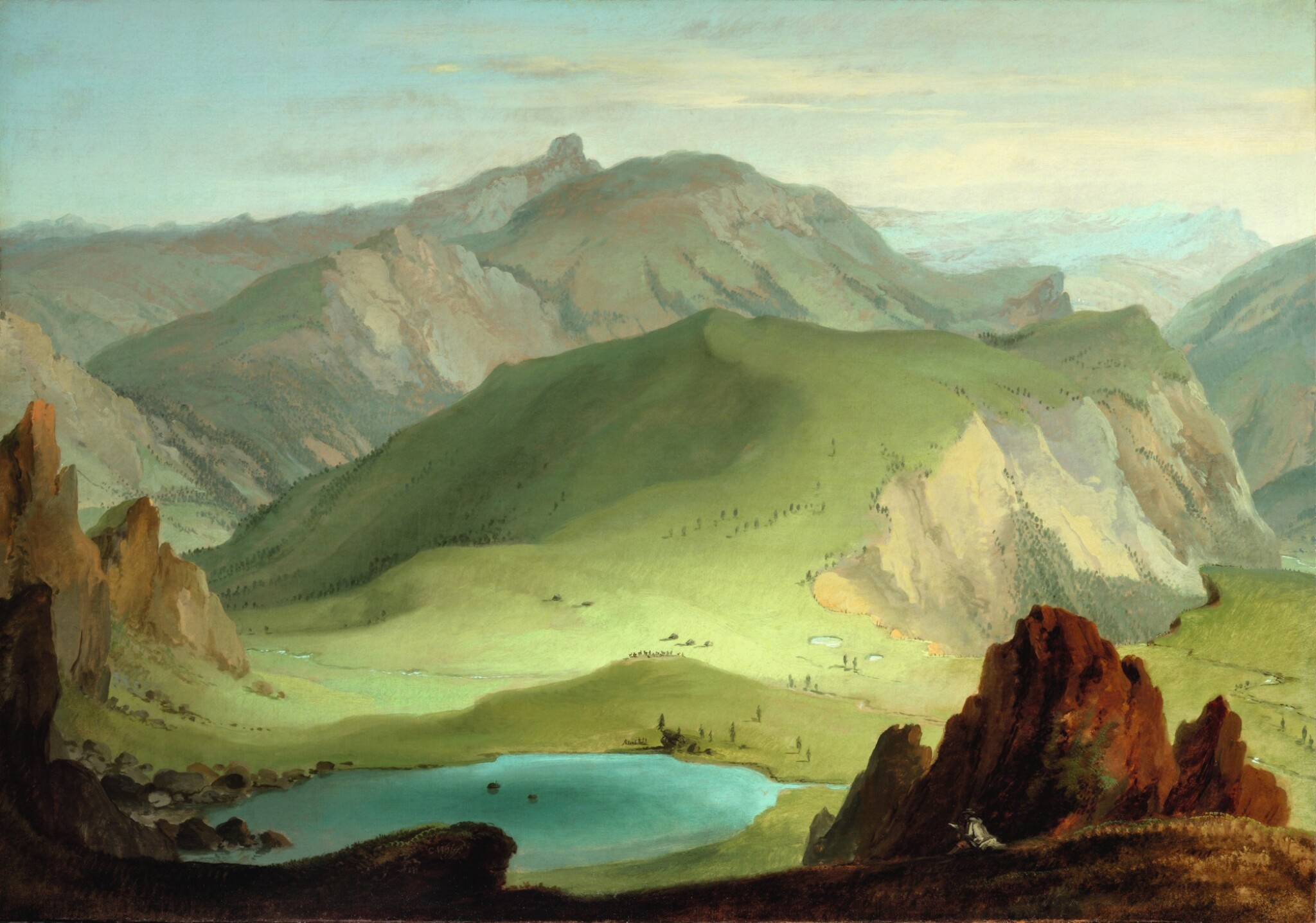 VIEW FROM THE MUNTIGALM ACROSS LAKE SEEBERG TOWARD THE STOCKHORN CHAIN

The canvas is unlined and stable on its stretcher. The landscape image reads strongly beneath clear varnish with bright colors and some impasto retained. Under UV inspection, small strokes of retouching are visible throughout the sky, with a few small circular repairs visible near the top left corner and one horizontal line of repair near the top right corner. The varnish on the landscape is more difficult to read through, but small scattered retouches are visible yet not distracting. There may be an older campaign of smaller retouching in the lower section that is not currently visible. The painting has been restored well and can hang in its current state. Offered in a simply carved giltwood frame with decorative inner lining.

Zofingen, Kunstkommission Zofingen, no. 19 (according to a label on verso);

"This must be one of the earliest examples of a landscape painted en plein air in which the artist included a portrait of himself at work. This spontaneous and beautiful picture of Lake Seeberg was painted during the last quarter of the 18th century, prior to the works of Caspar David Friedrich and his entourage, so it is both an extremely important document and a wonderful vision of the Swiss Alps."

Caspar Wolf painted this panoramic view of Lake Seeberg and the Bernese Oberland after sketching studies in pencil and oil from the 6,814-foot-high (2,077-meter-high) summit of Muntigalm in the Swiss Alps. He used a bird’s-eye view to capture topographical details like fir trees, small streams leading to the lake, rocky outcroppings, and most strikingly, the silhouette of the Stockhorn in the center distance. The harmony of blues and greens in the bright summer sun give the landscape a utopian feel that seems imagined but is in fact accurate. The small figure of an artist seated with a sketchbook in the right foreground attests both to Wolf’s firsthand study of the Alpine scenery and to the burgeoning artistic trend of emphasizing the sublimity of nature. The artist figure with his back to the viewer prefigures the so-called Rückenfigur, or the everyman who stands in for the viewer experiencing the awe of nature, as featured in the works of Caspar David Friedrich (1774 – 1840) a generation later. Wolf’s choice of scenery and clarity of painting style also anticipate the great Romantic landscape of the 19th century. Wolf was active during the Sturm und Drang movement in art and literature, in which the concept of the sublime first entered artistic vocabulary and artists in all media began to reconsider mankind’s role, and relative insignificance, in the face of often-terrifying nature. As a result of the Grand Tour, many artists in the 18th century also reevaluated centuries-old ideas that the mysterious mountain range was home to mythical creatures and instead gained a new and profound appreciation for the grandeur of the Alps.

Wolf had firsthand experience of the Alps as the result of a major commission from the Bernese publisher Abraham Wagner, who in 1773 hired Wolf to illustrate his encyclopedia text on the Swiss Alpine landscape, Merkwürdige Prospekte aus den Schweizer-Gebürgen (Remarkable Views of the Swiss Mountains). Alongside Wagner and the Alpine naturalist Samuel Wyttenbach, Wolf made six excursions to both accessible and more dangerous sites in the High Alps between 1773 and 1777. Beyond the book illustrations, Wolf painted over 170 paintings for Wagner to display in his home, and visitors to “Wagner’s cabinet” could order gouache or oil replicas of Wolf’s paintings.

Before Wolf’s success as a painter of mountain scenery, he was born the son of an exiled carpenter in the small town of Muri, where he painted on commission from the local abbey and for small decorative projects. He studied in Augsburg and Munich and went to Paris 1769-71, where he worked alongside Phillipe-Jacques de Loutherburg and was influenced by Carle-Joseph Vernet’s paintings of shipwrecks and Francois Boucher’s and Hubert Robert’s colorful Rococo landscapes. These influences can be perceived in the soft, lush colors of the present lot, as well as in others of Wolf’s paintings of natural features like waterfalls, caves, and glaciers.

The combination of pristine beauty and dangerous Alpine peaks makes Wolf’s panoramic landscape both idyllic and frightening, and his early interest in the relationship between humanity and nature makes him an important precursor to the Romantic painters and their fascination with the sublime.