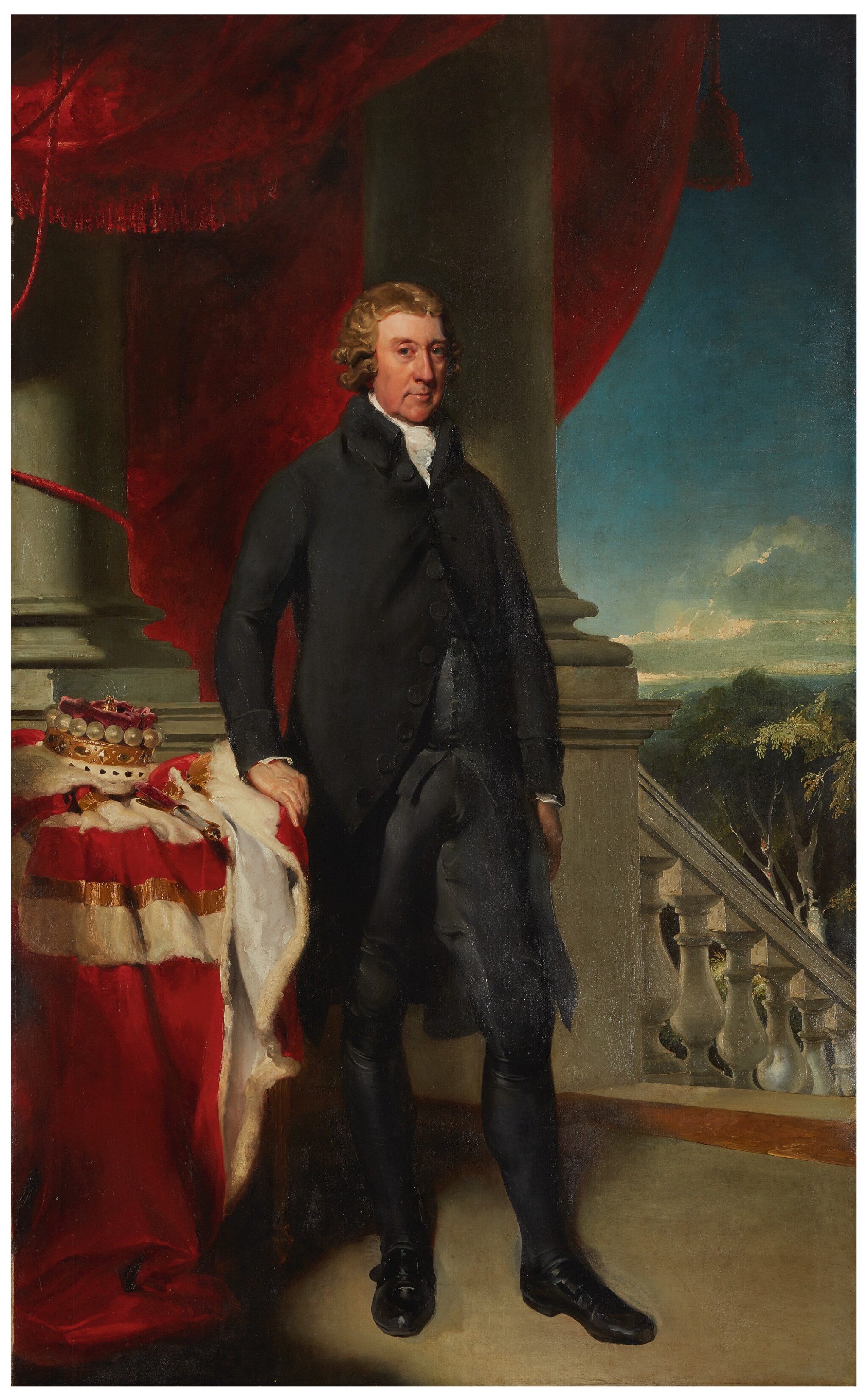 PORTRAIT OF THOMAS DAWSON, 1ST VISCOUNT CREMORNE, FULL LENGTH, WITH HIS HAND RESTING ON A TABLE

The canvas has an old, stable relining. The paint layer is thick and vibrant; heavy impasto and lively, lush brushwork can be seen throughout the painting, particularly in the still life on the left, the highlights in the face and hand, and in the clouds and landscape at right. Overall the painting presents beautifully with an impressive retention of the bright colors and fluid handling of paint. Under ultraviolet light an uneven varnish flouresces, with some areas of a light craqueleure pattern which aren't noticeable to the naked eye. There is very little retouching other than some minimal strengthening in scattered areas of the dark costume. An old scratch or very thin tear is visible, about 6 inches long, which runs vertically along the sitter's proper right foot. The retouching here is visible to the naked eye but not bothersome. Can be hung as is. Offered in a carved giltwood frame which has some wear and tear, including some loose parts.

Thence by descent in the family of the sitter;

K. Garlick, “A Catalogue of the Paintings, Drawings and Pastels of Sir Thomas Lawrence,” in Walpole Society, XXXIX, 1964, p. 61;

"Lawrence’s grand portrait of Thomas Dawson, 1st Viscount Cremorne, would have been a proud acquisition for the sitter. Lawrence is my favorite of the great 18th century British portraitists for his seemingly casual ability to capture the inner personality of his sitters. In this way he is part of a lineage that includes, for me, Sargent and Freud. It is not surprising if this portrait reminds you of Gilbert Stuart’s grand American portraits, given that the head of Dawson here is based directly on a portrait of the sitter by Stuart himself."

One of the great British portrait painters of his age, Lawrence was born in Bristol in 1769. By 1780 his family had settled in Bath, where the young Lawrence began to make crayon portraits, perhaps with the guidance of William Hoare. Lawrence settled in London in 1787 and, after attending the Royal Academy Schools for a short period, exhibited his first oil portrait at the Academy in 1788. The present picture, probably painted in the following year, was an important commission for the twenty-year-old artist, as it led to an introduction to Queen Charlotte, whom Lawrence painted in 1790 (London, National Gallery).

Two years later, Lawrence was appointed Painter in Ordinary to the King in succession to Sir Joshua Reynolds, and in 1820 attained the highest honor his profession could offer, the presidency of the Royal Academy. Among Lawrence’s most famous works is the series of portraits of the Allied commanders and statesmen responsible for the overthrow of Napoleon (1814-20). Commissioned by George IV for the Waterloo Chamber at Windsor Castle, these pictures established Lawrence’s reputation as the foremost portrait painter in Europe.

Thomas Dawson was born on 25 February 1725, the third son of Richard Dawson of Dawson Grove, Monaghan, and Elizabeth, daughter of John Vesey, Archbishop of Tuam. Thomas Dawson was a member of Parliament for Monaghan from 1749 to 1768. On 28 May 1770 he was made Baron Dartrey of Dawson’s Grove; on 19 June 1785, Viscount Cremorne; and on 20 November 1797, was named Baron Cremorne of Castle Dawson. He was first married to Anne Fermor, youngest daughter of the 1st Earl of Pomfret on 15 August 1754. Following her death in 1769, Dawson married Philadelphia Hannah Freame, daughter of Thomas Freame and granddaughter of William Penn, founder of Pennsylvania. Viscount Cremorne died on 1 March 1813. As he had no heirs, his titles became extinct.

The heads of the sitters are based on portraits of Thomas Dawson and his wife by Gilbert Stuart, which were exhibited at the Royal Academy in 1785. In Stuart’s portrait, Dawson is portrayed as Lord Dartrey. The motivation for the commission of a second set of portraits may well have been Dawson’s advancement to Viscount in 1785. That Lawrence relied on Stuart’s depictions for the rendering of the physiognomies suggests that the Viscount and his wife did not actually sit to Lawrence, and according to Charles M. Mount, Lord Cremorne himself lent Lawrence Stuart’s portraits from which to develop the half-lengths (Garlick, 1989, p. 174).1