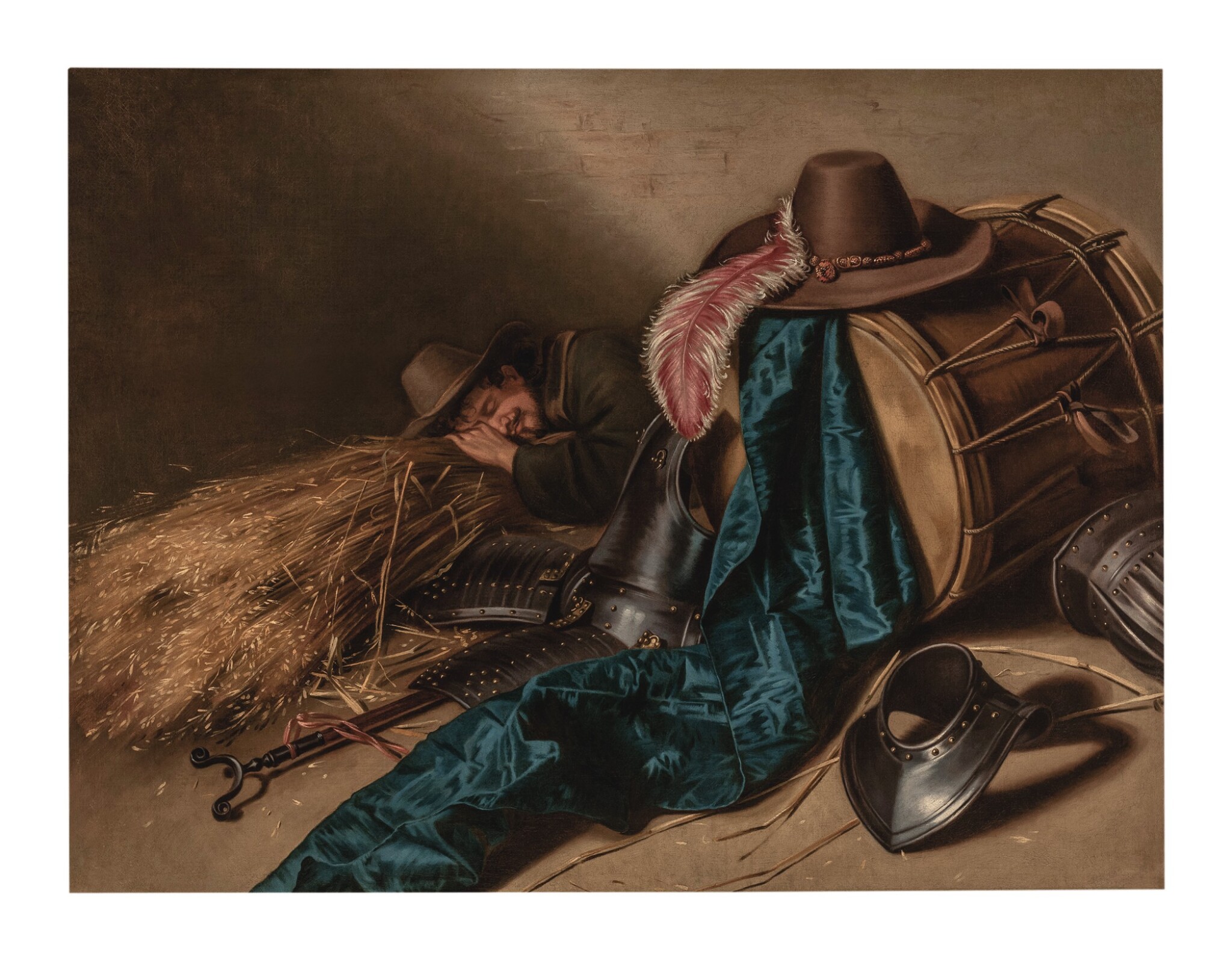 SLEEPING SOLDIER WITH STILL LIFE OF THE ACCOUTREMENTS OF WAR

The canvas is lined and stable on its stretcher. The image reads well beneath a clear varnish. Some craquelure is visible in the warm tones of the straw and floor but is stable. Under UV inspection, small strokes of retouching are visible throughout, mostly in shadows and folds, and are not distracting to the naked eye. A more concentrated area of repair and retouching is visible at the upper right corner but also cannot be seen by the naked eye. Overall the painting has been restored well and can hang in its present state. Offered in a 17th century Dutch style, carved ebonized wood frame.

"Although the artist of this work is unknown, it speaks to relevant issues in the 17th century Netherlands, which was involved in a long war with Spain about which citizens had different opinions. The large size suggests it was made for a specific patron, and it is interesting to imagine who would have owned the painting and what they thought of the war."

At the time of the Thirty Years' War, when this picture was painted, instruments of warfare resonated strongly with audiences. This war was really a number of different conflicts, which raged throughout Europe from 1618 to 1648, and transformed the daily lives of citizens of all countries involved. Even in the Netherlands, which were not the most affected region, people began seeing more soldiers, who spent their idle time in town, and could frequently be found in taverns. Thus, the image of unused but well polished armor and a drum must have been most evocative to the contemporary audience.

In the present picture, the inclusion of a man, probably a servant, who has fallen asleep by his master's apparel, may carry a didactic or moralistic meaning, in keeping with the Dutch painting tradition. Like Hendrick ter Brugghen’s famous Sleeping Mars in the Centraal Museum in Utrecht, this painting could have been seen as a commentary on the lax attitude of the Dutch leaders in the Eighty Years’ War. The sleeping soldier stood as a metaphor for the unengaged Dutch State. Instead of building up a robust military of its own, the Dutch rulers chose to hire mercenaries to defend some of its key cities in the South. In 1625 the Dutch city of Breda was lost to the Spanish. The city was recaptured in 1637 by Frederick Henry, but many towns and cities lived a precarious existence and were constantly under threat of a takeover by the Spanish forces.

Although this picture has thus far evaded certain attribution, its facture and treatment of textures are reminiscent of the works of contemporary painters such as Gerard Ter Borch and Jacob Duck. This painting has also been linked to Moses Ter Borch, no doubt because a painting in the Hermitage, showing a young man fast asleep while standing and leaning on his armor and other soldierly implements, has been attributed to Moses. While it is true, the long-haired man in the painting in the Hermitage does have a similarity to a drawn portrait of Moses by his old brother, Gerard, it is certainly not a product of Moses’s hand. In fact, we know of only drawings by Moses ter Borch, no certain paintings. The artist of this painting was indeed very keen on showcasing his mastery at depicting textures, including: delicate silks, polished armour, felt and feathers. Finally, it should be noted that the scale of the composition is unusually large for such a subject.