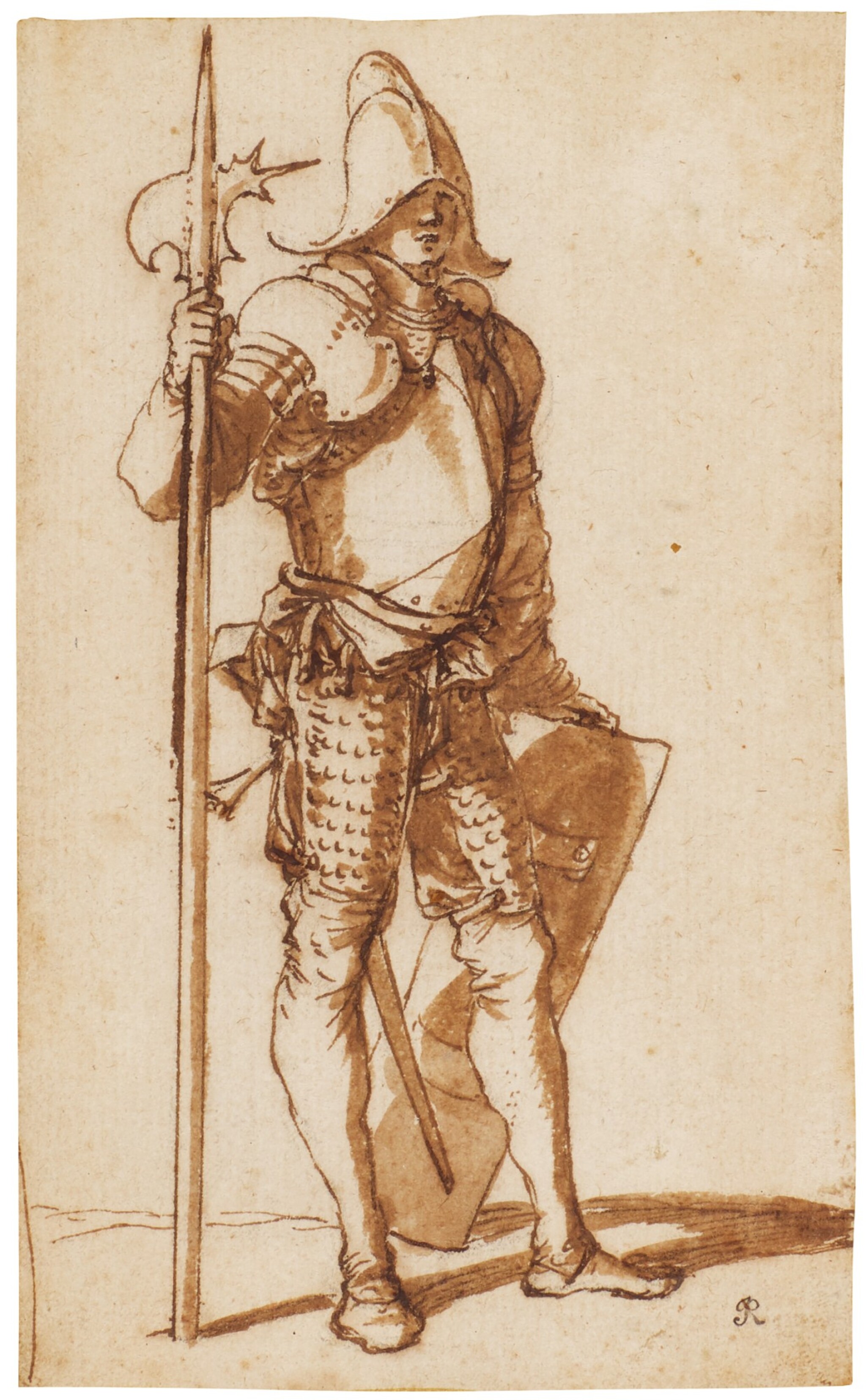 pen and brown ink and wash over traces of black chalk

Laid down. Overall in good condition. Some light staining around the edges of the sheet. Otherwise pen and ink and wash remain strong and vibrant throughout. Sold in a carved and gilded frame.

Alexander Scott Carter, Toronto (according to a note on the backing sheet);

"This delightful sheet is a quintessential example of Salvator Rosa’s draughtsmanship, in which the artist has combined the careful use of pen and brown ink with deftly applied touches of brown wash, achieving both luminosity and carefully modulated areas of shadow in the process. Besides its inherent artistic merits this drawing also has a particularly distinguished provenance having once belonged to the British artist and collector of Old Master Drawings, Jonathan Richardson Senior (1667-1745)."

This is a preparatory study for an etching by Salvator Rosa from his celebrated Figurine series, a group of sixty-two etchings of soldiers, peasants and other figures, depicted either individually or in groups of two, three or more. These etchings, which were published with a dedication to the artist’s friend and patron, the Roman banker and collector Carlo de’ Rossi, can be dated to Rosa’s years in Rome, around 1656-1657. It has been suggested that, apart from helping to spread Rosa’s fame, these Figurine etchings may also have served to rebut the claims, made by the artist’s critics, that he was merely a landscape painter without the ability to depict figures. As Richard Wallace has noted, ‘Rosa was very touchy about his reputation as a figure painter...With the Figurine he undoubtedly meant to show everyone, including his detractors...that he could master the human figure in an almost infinite variety of poses and expressive states.’ Often acquired as a complete set of prints and bound into albums, Rosa’s Figurine etchings remained popular with collectors well into the 18th century.

Around forty of Rosa’s preparatory drawings for individual etchings in the Figurine series survive. All are of identical dimensions to the etchings, and in most respects very close to the final print, albeit in reverse. Other preparatory drawings by Rosa for his Figurine etchings are today in the collections of the Teylers Museum in Haarlem, the Istituto Nazionale per la Grafica in Rome, the Metropolitan Museum of Art and the Pierpont Morgan Library in New York, the National Gallery of Art in Washington, D.C., the British Museum and the Victoria and Albert Museum in London, the Royal Library at Windsor Castle, and elsewhere.