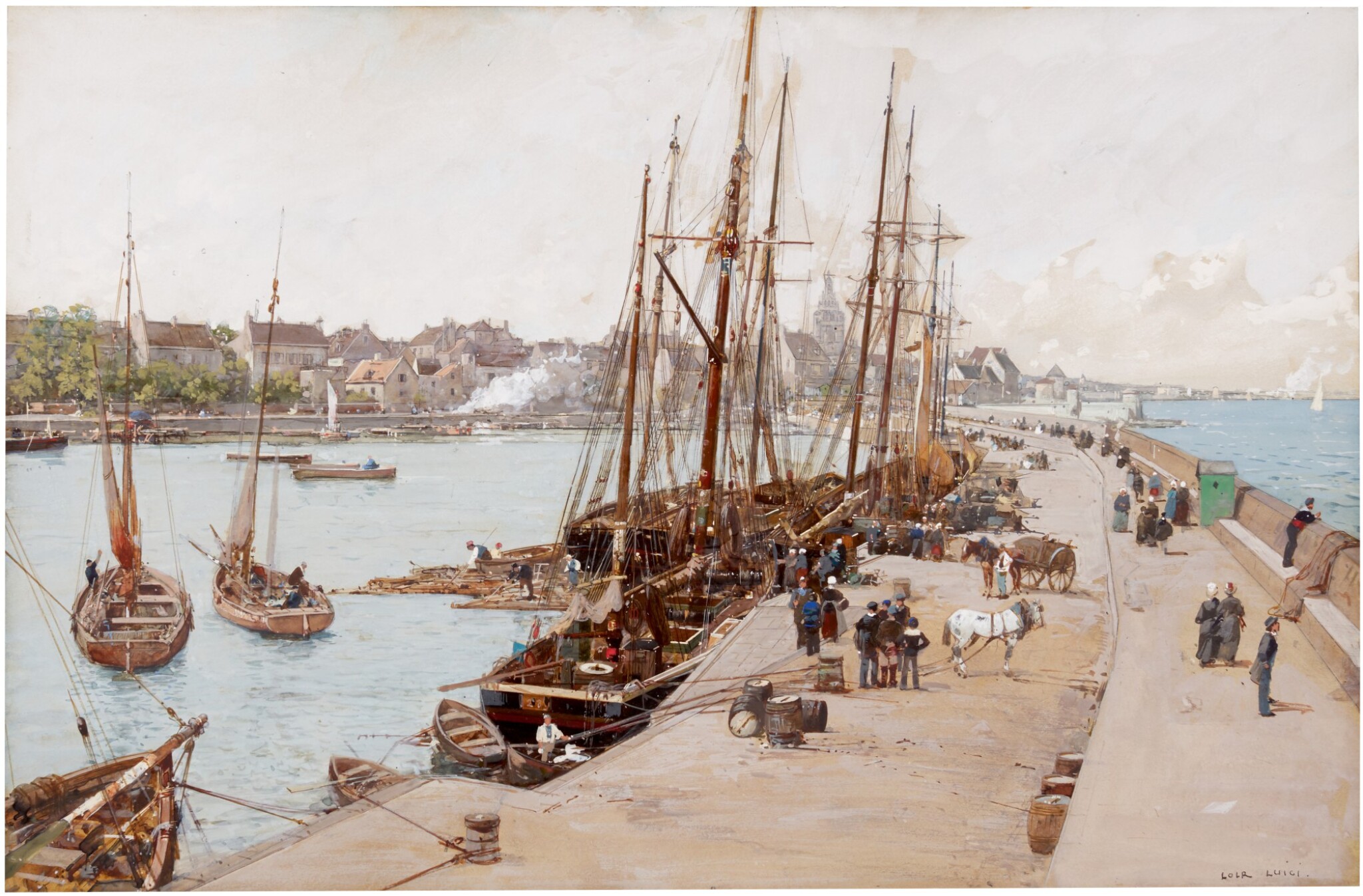 A VIEW OF ROSCOFF, BRITTANY

and inscribed in the upper margin of the backing board: Roscoff non dn(?)

watercolour and gouache, over a pencil underdrawing

Overall in very good condition. Some light staining at the upper edge. Colours remains strong and vibrant throughout. Please note this has not been viewed out of its frame.

"I delight in the way Loir has cleverly elevated our viewpoint in this wonderful depiction of the harbor of Roscoff in Brittany. In doing so he has removed the viewer from the humdrum of daily life amongst the fisherfolk as they unload their catch and instead provided us with a full overview of the town, seen through the masts and intricate riggings of the moored boats. Although there is not a single seagull in sight, the inevitability of their guttural cries is utterly palpable as your eye slowly makes its way across this quietly reassuring scene."

Born in Austria to French parents who served the exiled French Bourbon royal family, Luigi Aloys-François-Joseph Loir moved with his family and the Bourbons to the Duchy of Parma in 1847. In 1860 his family returned to Paris following the explusion of the Bourbons from Parma, but Luigi remained in the city, having enrolled, at the young age of eight, at the Accademia de Belle Arti. He eventually rejoined his family in Paris in 1863. There he studied with the decorative painter and set designer Jean Pastelot, making his Salon debut in 1865. Loir painted mainly views of Paris, in all seasons and at different times of the day or night. Loir’s paintings proved very popular and commercially successful, and by the end of the 1880s several had been acquired by the State, as well as both French and foreign museums. Loir continued to exhibit at the Salons until 1914. He won a gold medal at the Exposition Universelle of 1889, and was commissioned to design the cover of the official catalogue of the Exposition Universelle of 1900. He also worked as a commercial graphic artist and illustrator, theatrical and poster designer, book illustrator and lithographer. A member of both the Société des Aquarellistes and the Société de Peintres-Lithographes, as well as a jury member of the Société des Artistes Français and the Société des Arts Décoratifs, Loir rose to a position of some prominence in the Parisian art world. Paintings by Luigi Loir are today in the collections of the Musée d’Orsay, the Hôtel de Ville, the Musée Carnavalet and the Petit Palais in Paris, as well as in the museums of Bar-le-Duc, Bordeaux, Chicago, Le-Puy-en-Velay, Marseille, Moscow, Nancy, Nice, Prague, Rouen, St. Louis and Vienna, among others.

Although perhaps best known as a painter of Parisian scenes, Luigi Loir travelled extensively throughout France, painting landscapes characterized by an attention to detail and an abiding interest in light. Among the largest known works by Loir, this splendid view of the harbour and town of Roscoff, in the département of Finistère in Brittany, was painted from the Quai Neuf, one of the three quays which embrace the harbour. In the centre right background, between the masts of the boats, can be seen the tower of the granite church of Notre Dame de Croaz Batz, financed and built by the shipowners and traders of Roscoff in the 16th century. As one 19th century English guidebook noted, ‘Roscoff is filled with sailors and smugglers’,2 and the appearance of the Vieille Porte, built in 1623, remains relatively unchanged today.