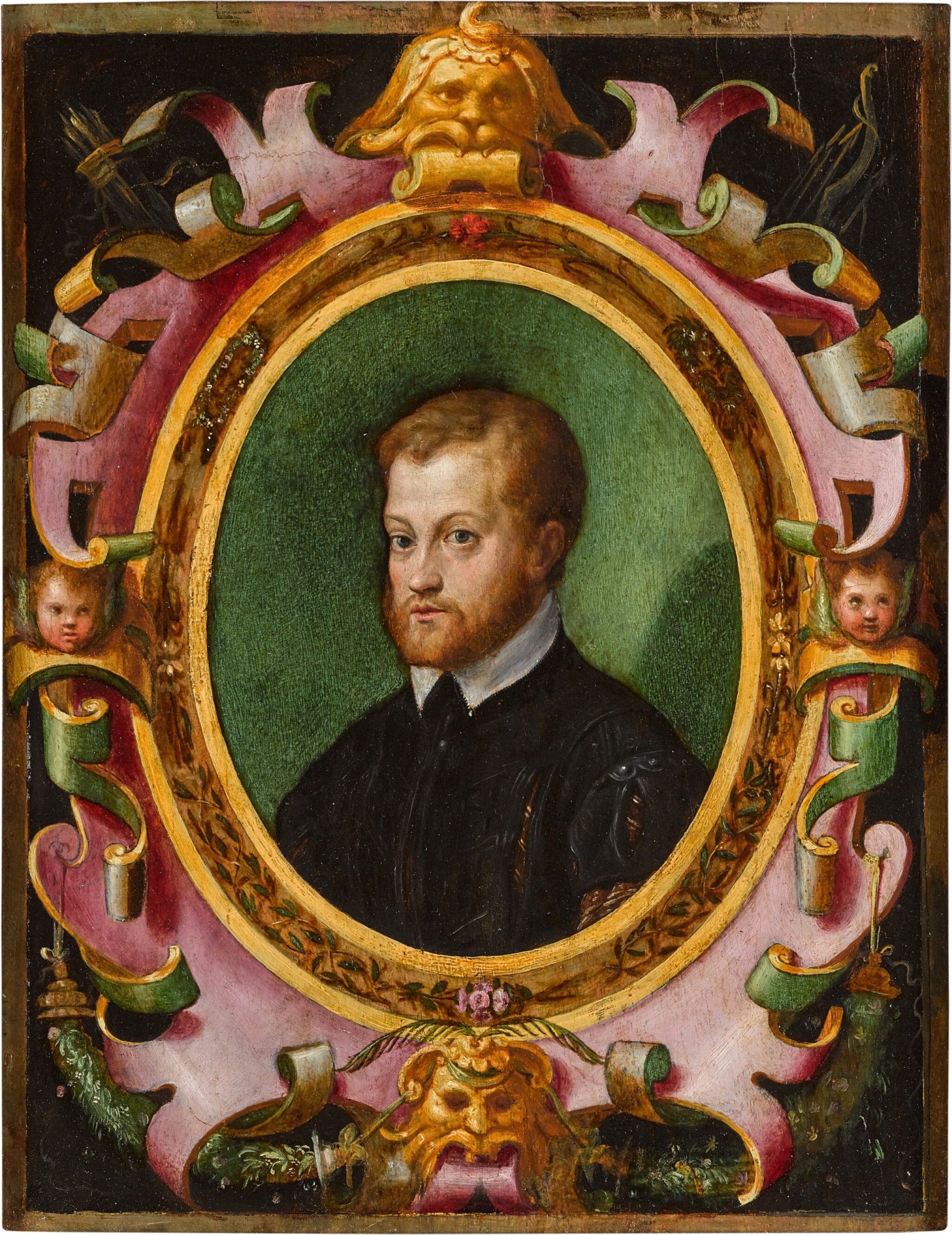 PORTRAIT OF A BEARDED MAN, BUST-LENGTH

oil on panel, in a painted oval and trompe l'œil cartouche frame

The panel is flat and stable and held in a later black frame in good condition. The paint surface appears to the naked eye to be in good condition with the colours still vibrant. Inspection under UV reveals some strengthening to the darker tones of the foliage of the cartouche as well as some strengthening in the shirt and in the area immediately around the face. Ready to hang.

The reverse of the panel: where the paint surface has not been scratched or abraded, the colours are still strong.

“This Portrait of a Gentleman exemplifies the elegance and intelligence of Lombard cinquecento portraiture which has always attracted me. The direct simplicity of the figure make it an intimate portrait, but the elaborate strapwork decoration in bright greens and pinks of the cartouche that surrounds the sitter distinguishes it as something quite refined. The emblem of Minerva holding an errant Cupid at bay on the reverse reminds us to never let our passions get the better of us, but I wonder what it meant to the sitter? If a love token, then this portrait sent a strong message to his beloved.”

Professor Marco Tanzi, who endorses the attribution to Campi, dates this picture to the middle years of the sixteenth century, based on the sitter's clothing. Tanzi compares the work to other known portraits by Campi, including the Portrait of a Prelate in the Galleria Spada, Rome, and the Portrait of a Gentleman, in a private collection in Piacenza. Each of the three sitters shares a similar fixed gaze, while the backgrounds are all of the same intense green colour. Tanzi further compares the present painting to another portrait by Campi (Borromeo Collection on the Isola Bella), whose physiognomy is built up in the same way through the use of pinks, whites and greys. On the basis of the unusual subject depicted on the verso, Tanzi proposes that the panel may have been a marriage gift from the sitter to his wife. Certainly that would go some way to explaining why the image shows Cupid being fired at rather than shooting the arrows himself. The implication is that the bride should be faithful and not succumb to Cupid's arrows aimed by other suitors.

The unusual trompe l'œil cartouche framing device is found in another work by Campi, a Parnassus, whose whereabouts is unknown.1