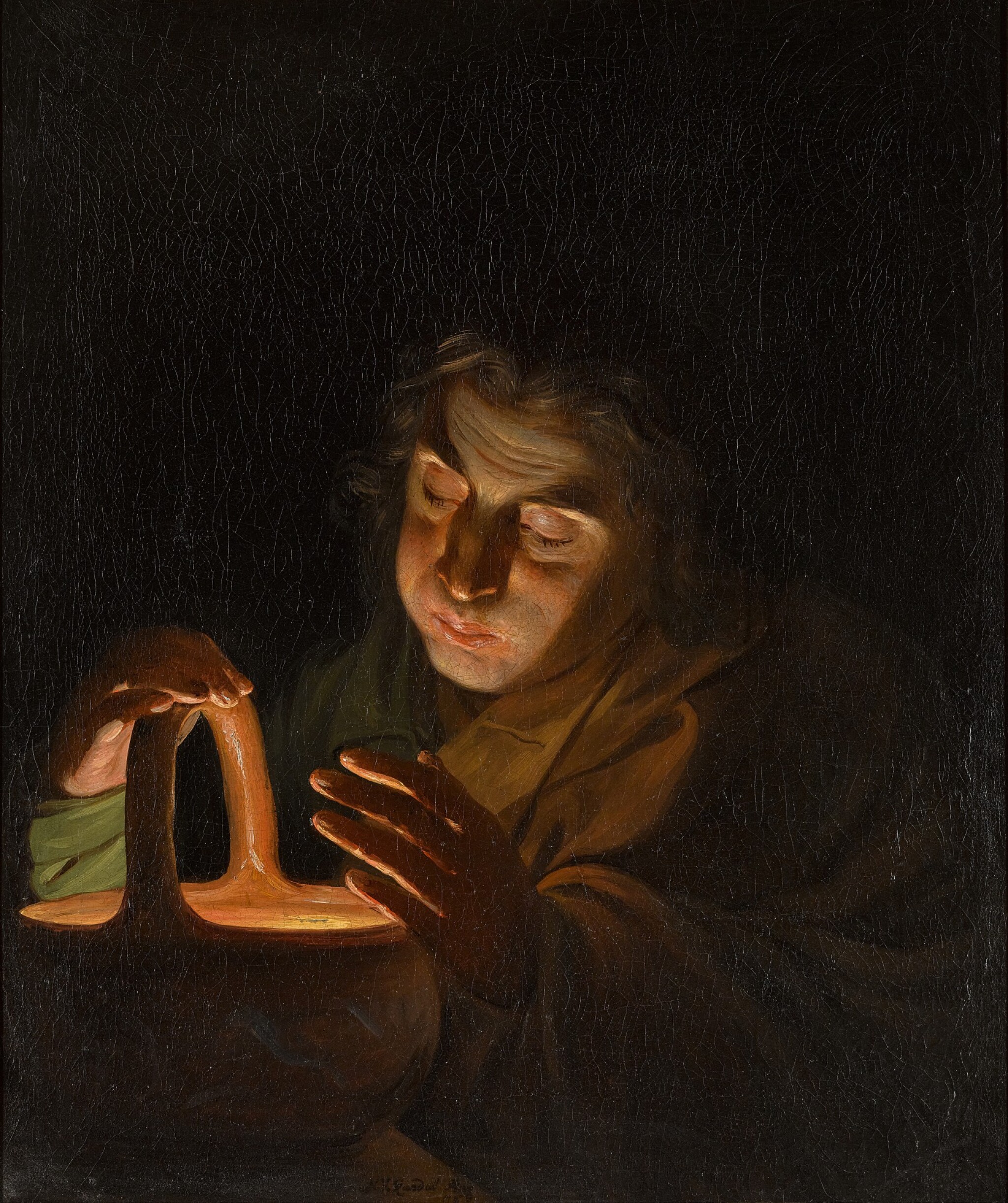 A MAN BLOWING ON A LAMP

"Depicting the appearance and effect of candlelight through paint must surely be one of art’s greatest challenges. This image evokes the legacy of artists who delighted in the subject, from Georges de la Tour, to Adam de Coster, to Joseph Wright of Derby."

Born on 28 October 1736, Quadal studied first at the Akademie der bildenden Künste, in Vienna, before moving to Paris, where he undertook further study in 1768. While there he painted a number of horse subjects for Louis-Joseph, prince de Condé. Continuing his peripatetic life, in 1772 he moved to London, where he stayed with the painter E.F. Cunningham. He exhibited a number of animal paintings at the Royal Academy in 1772 and enrolled in the Royal Academy Schools on 6 December 1773, when he gave his age as twenty-eight. In 1776 he painted a pair of half-length portraits of John Mathews and Anna Mathews, both signed and dated (sold Christie's East, New York, April 1988, lot 99). He may have been in Yorkshire from circa 1777 to 1779, after which date he moved to Dublin. Again he met with considerable success, the Dublin Society purchasing a number of his animal studies for use by its students. Quadal was in Italy from 1782 until probably 1786, visiting Rome and Naples. A painting of three lions in the Gemäldegalerie of the Akademie der bildenden Künste, Vienna, is signed, dated 1782, and inscribed ‘Roma’. Also in that collection is a portrait of the first owner of that painting, Anton, Graf Lamberg-Sprinzenstein, with his dog, dated 1784 and inscribed ‘Napoli’.1 A self-portrait by Quadal, showing him with his pet dog, entered the collections of the Uffizi in Florence in 1785. A pair of large portraits of court dog-handlers with their charges, in the Palazzo Reale at Caserta, is signed and dated 1784.2 A painting of Travellers drinking Wine in the Muzeum Narodowe, Warsaw, dated 1786, shows Vesuvius in eruption in the background.

On returning to Vienna in 1787 Quadal painted his masterpiece, The Nude Room at the Vienna Academy with the Academy Members (also for Graf Lamberg; Akademie der bildenden Künste, Vienna).3 That work is rather uncharacteristic, his usual output being a combination of hunting scenes, animal paintings, and portraits. He returned to England and in 1791 is recorded in Bath, from where he exhibited Two Italian Lazzaroni Boys reposing with a Group of Dogs and A Boy Teaching a Dog to Count at the Royal Academy. He was in London again by 1793, where he exhibited once more at the Academy and published, from 6 George Street, Hanover Square, A Variety of Tame and Wild Animals... for the Use... of the Young Practitioner... of Design, a series of engraved animal studies. By 1794 he was in the Netherlands, in 1796 in Hamburg, and finally, in 1797, in Saint Petersburg, where he was appointed master of the Academy of Arts. Portraits of the Granduchesses Maria and Anna, daughters of Tsar Paul I, dated 1799 and 1802, are in the Louvre. Quadal remained in Saint Petersburg until his death there on 11 January 1808.

The present painting suggests that Quadal may have returned to England by 1789, the date it was painted, since it is on a canvas of standard English dimensions and reveals particularly strongly the influence of Joseph Wright of Derby. Wright’s influence is also seen in the similarly candlelit Old Man plucking a Bird sold at Christie’s, London, 18 April 1991, lot 8, which is of similar size and also signed and dated 1789.