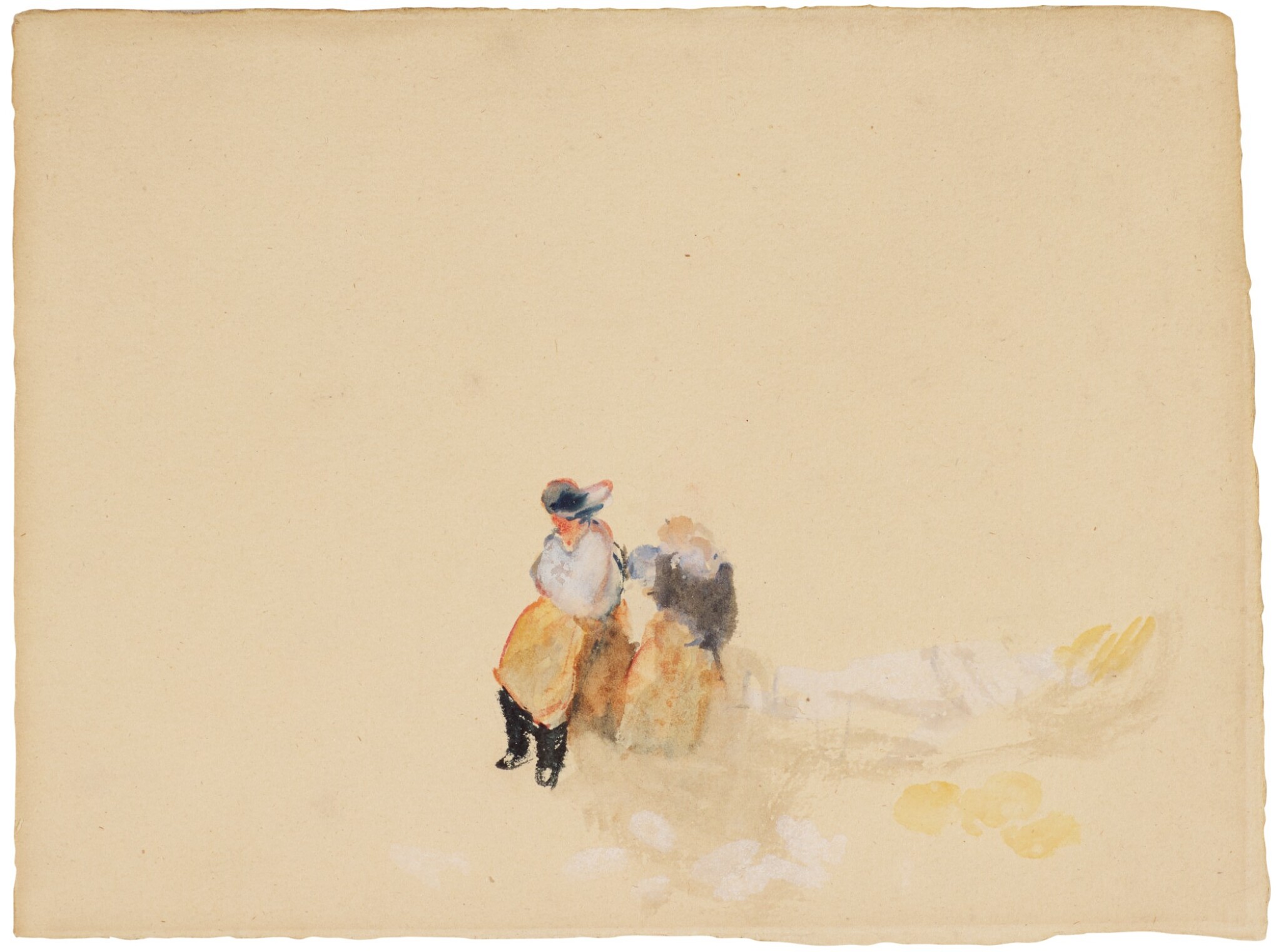 FIGURES ON A BEACH

The watercolour has survived well and the colours retain their original vitality.

The sheet has darkened very slightly and the extreme edges (which have obviously been protected from the light by a previous mount) are a little but lighter in tone. These colour changes are extremely minor.

There are one or two very minor spots and foxmarks, but overall the condition is very good.

"Turner possessed an unquenchable desire to record the world around him and his sketchbooks (the vast majority of which are held at Tate, Britain) are bursting at the seams with evidence of a long life of looking and travel.

While a man - probably one of Margate’s fisherman - leans against a low wall or barrel with ruddy face and hunched back, a woman seems to busy herself - perhaps sorting fish or untangling netting - to his right.

﻿Painted for himself, simply because the scene caught his eye, it would seem to me that works such as this allow the modern viewer to peer directly into the mind of one of Britain greatest artists."

Throughout his life, Turner painted a number of watercolours depicting figures on beaches. It was a subject that intrigued him and many were painted on the beaches in and around Margate where he stayed with his landlady Sophia Booth. This watercolour, along with many other works by Turner, was in her possession at the time of her death. The present watercolour has been dated by Ian Warrell to the late 1830s or early 1840s. At this stage in his career, Turner was interested in capturing an ethereal impression of what he saw recording it with great rapidity. Another similar watercolour from the same sketchbook but with more figures is in a private collection (Fig.1).

This sheet comes from a volume of forty-six watercolours, chalk drawings and pencil sketches by Turner which included other studies of beach and shipping scenes, views of Switzerland and Germany, and sketches of various buildings.

On the flyleaf of the album, Laurence W. Hodson, one of its previous owners, inscribed the following "these sketches taken out of two original sketch-books of J.M.W.Turner and mounted by my directions July 1844. The books came to me direct with some other property of Turner’s. Most of these sketches are written in Turner’s hand-writing –well-known. 46 sketches in all."

We are grateful to Ian Warrell for dating this watercolour to the late 1830s or early 1840s.