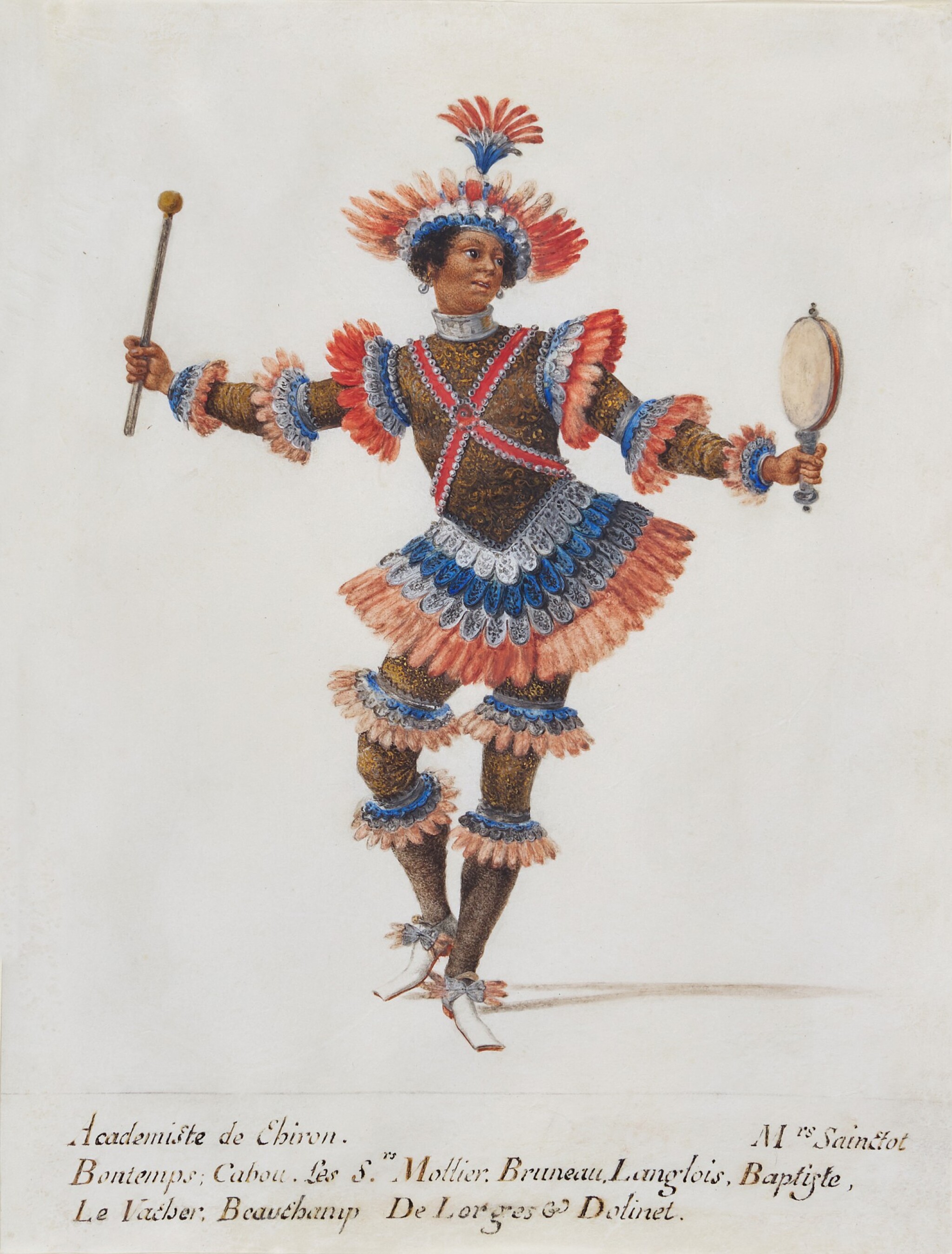 gouache heightened with gold on vellum;

Attached at four corners of the sheet. Overall in very good condition. The vellum has buckled. Light staining/abrasion at the four corners where sheet has been glued down. The gouache is extremely fresh and vibrant throughout.

"The theatrical productions staged at the court of the French ‘Sun King’, Louis XIV, must have been some of the most elegant – and extravagant – ever seen. This spectacularly refined (and superbly preserved) drawing, made by Louis’ master of ceremonies, Henri de Gissey, is one of the most refined and beautiful visual records that we have of these long-gone moments of courtly life, and I have loved it ever since I first saw it, many years ago, in a French private collection."

This drawing belongs to a collection of designs made by the artist and designer Henri de Gissey for Les Noces de Pelee et de Thetis, a ballet put on by the French court of Louis XIV (1638 - 1715) in 1654. Ballet originated in the Italian Renaissance courts of the 15th and 16th centuries, though it was in France during the reign of Louis XIV where it developed into the dance form that is seen today. Ballets were lengthy and elaborate and often served a political purpose. During his reign, Louis XIV used ballet to offer reassurance to a kingdom in the midst of civil war and to a court aristocracy in the midst of profound social, political and cultural change. He also used these great spectacles to validate and promote himself to his people. During the 50s and 60s much of the political power in France lay in the hands of his Chief Minister, Cardinal Mazarin, ballet was the medium through which Louis could best communicate his ideas, as Mazarin had little interest in it.1

Les Noces de Pelee et de Thetis was one of the court’s most elaborate spectacles. It was first staged at the Theatre du Petit-Bourbon of the Louvre on 26 January 1654 and was based on a libretto by Francesco Buti, set to the music of Carlo Caprioli, and choreographed by Isaac de Benserade. Giacomo Torelli designed the sets and Henri de Gissey conceived the costumes. De Gissey held the post of dessinateur de la Chambre et du cabinet de Roi in the Menus Plaisirs du Roi during Louis’ early reign and was therefore responsible for the designs of all festivities, ceremonies and events. The date, design and all the details of the plot and staging of this piece are known from a manuscript held at the Bibliothèque de l’Institut in Paris, which contains a printed text that describes the action, lists the performers and includes a series of illustrations on vellum of the sets and costumes. (See Manuscrit 1005, Description [particuliere di Grand Ballet et Comedie des Nopces de Pelee et Thetis, avec les machines etc., Paris 1654).

Ballets were largely performed by noble amateurs, but from a young age the king also took part, often performing the role of a king or a godlike figure.2 In this performance, aged 16, he played six characters including the God Apollo. In 1653, a year before, Louis had performed the role of Apollo for the first time in the ballet Ballet de la Nuit. With this early allegorical role Louis had established an identification with the Sun God that he would exploit throughout his reign. In 1661, he officially made the sun his emblem.

Les Noces de Pelee et de Thétis is the story of the courtship and marriage of the nereid Thétis, who, though admired by both Neptune and Jupiter, finally consented to the persistent attentions of the mortal Peleus, king of the Myrmidons. The nuptials were celebrated with great pomp on Mount Pelion, with the centaur Chiron officiating. The present figure represents one of the académicien (pupils) of Chiron. At the beginning of Act III, Chiron sets his academiciens to perform a dance to distract Peleus. These figures are described as being dressed as Indians with brightly coloured plumage, pearl beads and holding small tambourines shaped like mirrors. This detail apparently refers to the then commonly held belief in the Indian custom of capturing parrots through the use of mirrors and percussion instruments.3 The inscription on the drawing identifies the academicien depicted as Monsieur Sainctot, the maître d'hotel of the King and introducteur des Ambassadeurs at the court of Versailles, and thus a powerful figure at court. Names of other members of the académiciens chorus are inscribed on the sheet.

There are three surviving groups of drawings from this ballet: five in the Musée Carnavalet, Paris; an album in the Bibliothèque de l'Institut in Paris and a group of three that appeared on the Paris market in 1990 from which the present drawing comes.4 Some are repetitions, which served as practical atelier models and do not have full inscriptions like the present sheet. The quality of draftsmanship of the Carnavalet and Paris group, including this one, set them apart and suggest they are autograph works of de Gissey. The drawings appear to be records of characters rather than designs, most of the figures are presented very much as portraits (in the performance itself the participants wore masks). The drawings also clearly relate to other documented works by the artist, including those for the Ballet de la Nuit. Pierre-Jean Mariette (1694–1774) referred to the de Gissey drawings in his Abecedario, noting that he greatly admired the ‘richesse et la nouveauté des habits des différents acteurs qui figurent dans ses ballets’.

1 G. Cowart, The Triumph of Pleasure: Louis XIV and the Politics of Spectacle, p. 7