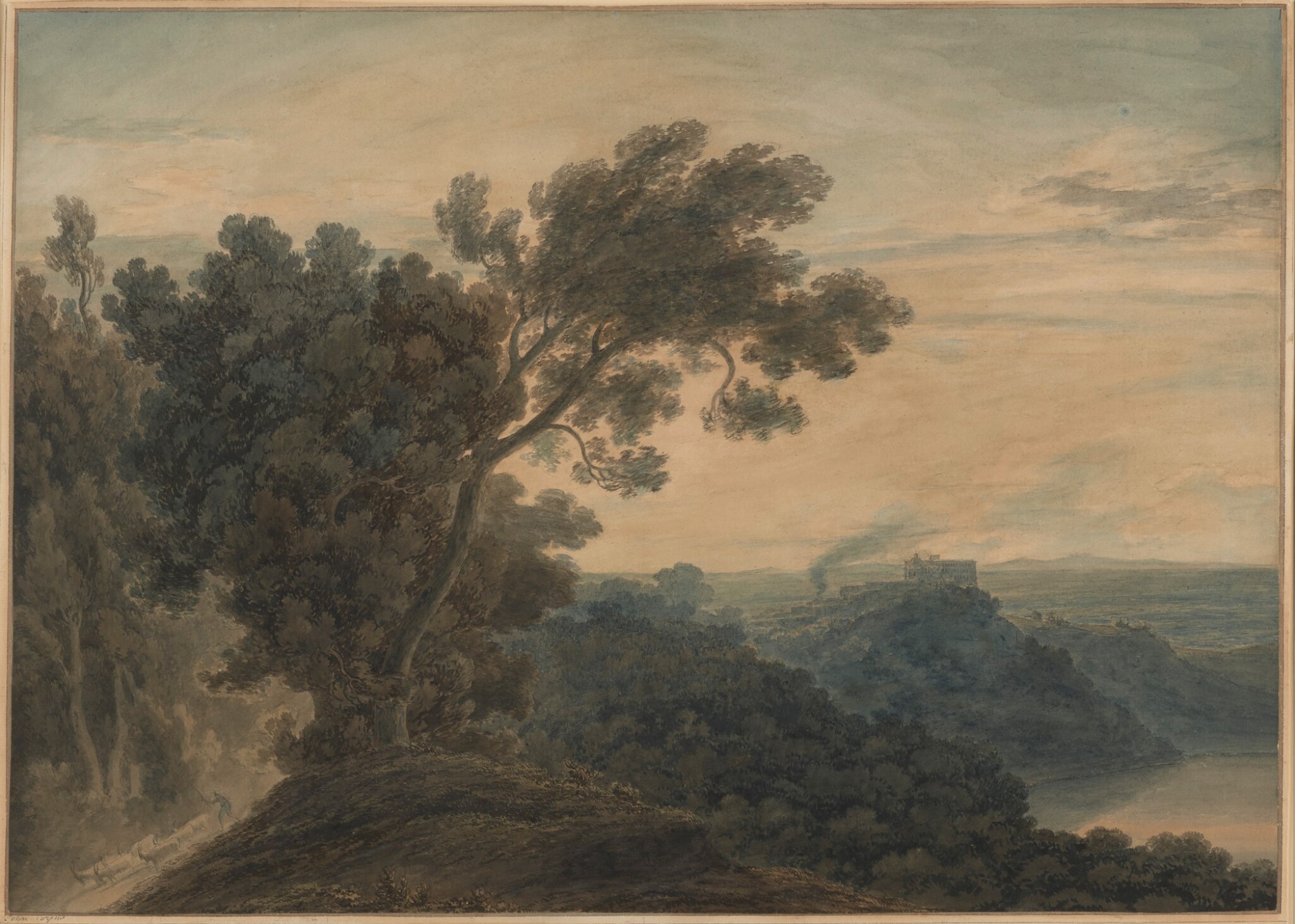 This is an impressive and rare work and it is in overall good condition. The blues, greys and pen and ink are all well preserve. The middle section of the sky has discoloured a little and it is likely that the fragile pigment gamboge yellow has disappeared - the lost this very fugitive tone often occurs in Cozen's work). The work is laid down onto its original, signed, mount. This has been trimmed.

"This is a grand, hauntingly beautiful and powerful work by an artist that John Constable once described as ‘the greatest genius that ever-touched landscape.’

For me, the watercolour’s dimensions and rich tonality entirely sum up Cozens’ revolutionary aim: to produce with transparent colours something that could compete in terms of pictorial strength with oil painting. Other artists followed closely in his footsteps, but none with the same power of imparting such significance to a subject by subduing its topographical contents and enhancing its pictorial and emotional elements. It is not for nothing that he is known as the ‘father’ of the English watercolour school."

The countryside surrounding the Lakes of Albano and Nemi in the Alban Hills, south-east of Rome, was a favourite area for artists attracted by the spectacular scenery and by its associations with Roman history and classical poetry. Shortly after arriving in Rome in 1776, Cozens’s friend Thomas Jones recorded his impressions of the landscape ‘this walk around the lakes considered with respect to its classical Convulsions of nature in the remotest Ages…the various extensive & delightful prospects it commands is, to the Scholar, naturalist, Antiquarian and Artist…the most pleasing and interesting in the Whole World – And here I can not help observing with what new and uncommon Sensations I was filled on my first traversing this beautiful and picturesque Country – Every scene seemed anticipated in some dream – It appeared Magick Land’. Cozens had arrived in Rome by November 1776, accompanying Richard Payne Knight as his draughtsman. He was sketching in the area in April 1777; a pencil drawing of Lake Albano from a more easterly viewpoint is in the Soane Museum’s volume of ‘28 Sketches by J. Cozens in Italy. 1776 -1778’, and he must have made others from different points around the lake. This subject became one of Cozens’s most popular, for he repeated it in at least ten watercolour versions. Each is subtly different, sometimes more intense and brooding in character and some lighter-keyed and almost decorative.

This watercolour has a haunting, almost melancholic beauty. He has turned a familiar topographical view in to a work of the highest imaginative significance and one that is deeply emotionally charged.