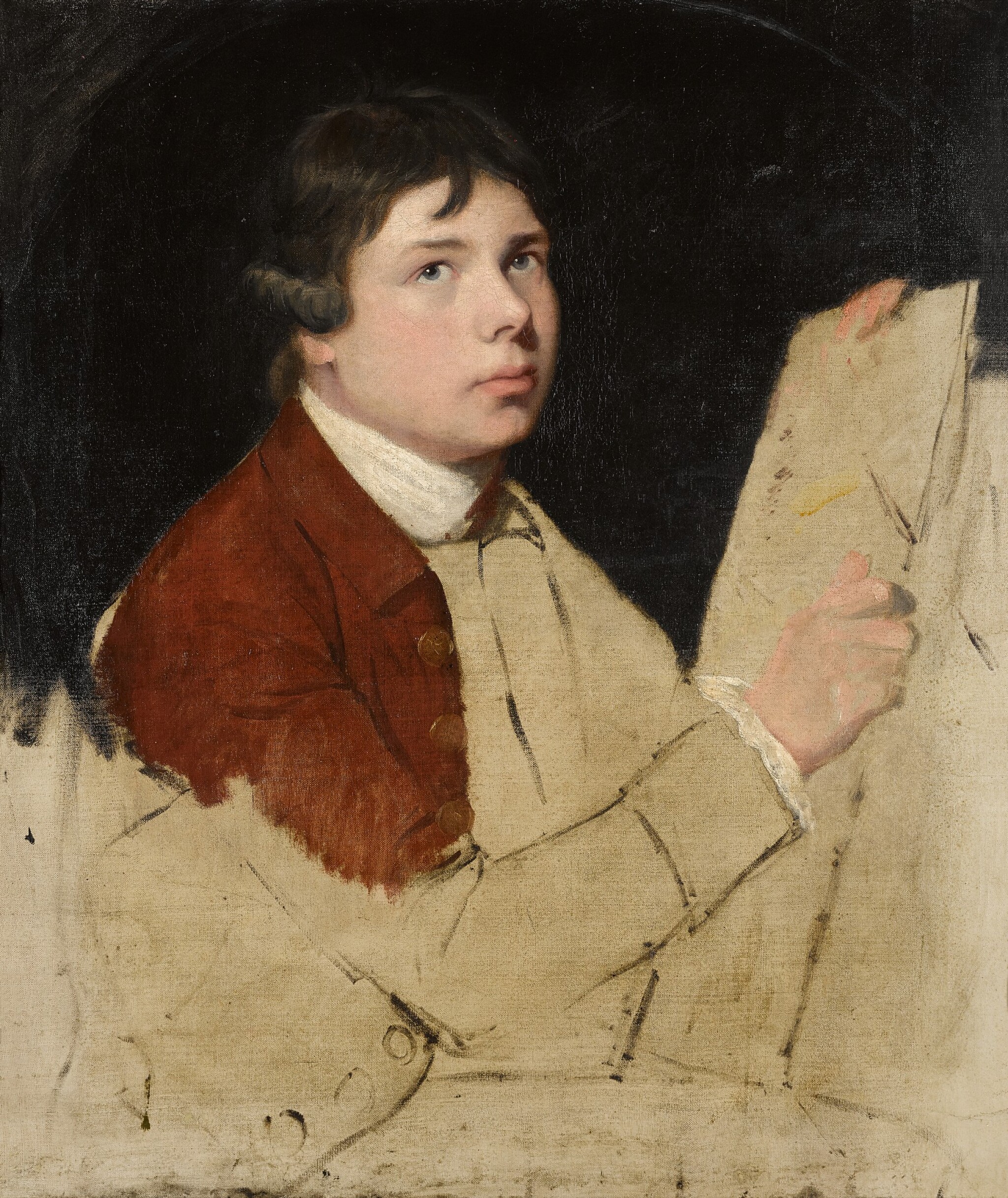 SELF-PORTRAIT OF THE ARTIST

Recto: The painting appears to be in very good condition. The picture is unfinished and the canvas is unlined. Examination under ultraviolet light reveals a repair to an old multi-branched tear, centre right, just above and to the left of the hand, predominantly in the dark pigment of the background, but also branching into the ground priming where the artist has left a reserve for a sketch pad (this has been sensitively retouched and is not visible to the naked eye). There is also some consolidation to past tenting in the face and the hair, and a small number of further very minor spots of scattered retouching.

Verso: The portrait on the reverse has an old and discoloured varnish overall. There have been several campaigns of restoration which are visible under ultraviolet light and the retouching to the tear mentioned above is mirrored on the reverse.

By inheritance at Hopton Hall to his daughter, Isabella, who married William Pole Thornhill, who renounced Hopton and its contents in favour of his kinsman, Henry Chandos-Pole-Gell (1829–1902);

By descent to his son, Brigadier General Harry Chandos-Pole-Gell (1872–1934), who sold Hopton Hall in 1918 and moved the family to Newnham Hall, Northamptonshire;

Thence by descent until 2015, when acquired.

"Mortimer was something of a child prodigy, who, when still in his early 20s, burst onto the British art scene in the 1760s with an energy and inventiveness matched by few of his peers. One of the only British artists of the period to take the elevated genre of History painting seriously, he was a figure as romantic as the subjects he painted, who played as hard as he worked, and his early death at the age of thirty-nine, just five years after he was elected President of the Society of Artists, robbed the British art world of one of its most promising and innovative talents. I particularly like the unfinished spontaneity of this study and the intensity of purpose in his determined expression – those are the eyes of a young artist on the cusp of greatness!"

This sensitively handled oil is the earliest recorded self-portrait by John Hamilton Mortimer, painted circa 1758, shortly after Mortimer had entered the studio of Thomas Hudson. It was in Hudson’s studio that Mortimer met Joseph Wright of Derby, with whom he had both a life-long friendship and working relationship. Previously unpublished, it sheds significant light on Mortimer’s working practices and on the activities of young artists in the 1750s, the decade before the foundation of the Royal Academy. Mortimer was one of the most innovative and impressive painters of the mid-eighteenth century and the rediscovery of this sensitive early work reveals what a precocious talent he was from the very beginning. Being unfinished, it also offers valuable insights into the working methods of British painters at a transitional moment in the emergence of an indigenous school of art. A remarkably confident work for such a young artist still at the beginning of his training, the present portrait combines two important themes which would remain consistent features of Mortimer’s career. The first is self-portraiture itself. Like his older friend Joseph Wright of Derby, he was fascinated by self-portraiture. Four years after this study was painted, Mortimer produced another self-portrait, which he exhibited at the Society of Artists in 1762 (now untraced)1 – his first exhibited work, at the first exhibition of living British artists in London. Like Wright, Mortimer continued to produce self-portraits throughout his career, occasionally in the character of a banditti (inspired by the life and work of Salvator Rosa), in both single figure compositions and group conversations pieces – two such examples being the portrait of him with his father and brother out shooting woodcock (Yale Centre for British Art, New Haven); and the portrait of him with the sculptor Joseph Wilton and a student, studying from the antique (Royal Academy of Arts, London).2

The second is artistic education. Again, like Wright, Mortimer was clearly fascinated by the process of learning to paint and draw and like Wright – whose famous Academy by Lamplight was exhibited at the Society of Arts in 1769 (Sotheby’s, 6 December 2017, lot 11) – he produced a series of celebrated images of artists at work. The same year Wright exhibited his famous masterpiece, both he and Mortimer were appointed as directors of the Maiden Lane Academy by the Society of Artists, a role that required them to set the life model during classes, along with Ozias Humphry, Robert Edge Pine, George Stubbs and Johan Zoffany. Although unfinished, here Mortimer depicts himself at work holding a drawing board, presumably in the process of making a study with a porte crayon. Mortimer’s upturned eyes and concentrated expression possibly suggests that he was attempting to depict himself in the process of drawing a sculpture or cast, much like the students in Wright’s Academy by Lamplight. The technique Mortimer has used in this study is also interesting, given that in 1758 he was still apprenticed to Thomas Hudson and was still learning to handle oil paint. The blond ground, the use of liquid brown paint to block in the costume and the careful build-up of colour, all accords with Hudson’s own technique. So too does the format: Mortimer has shown himself in a feigned oval, similar to many of Hudson’s most successful portraits of the period and a format he would return to in the 1760s.

Exactly why there is a copy of Joshua Reynold’s self-portrait of 1774 (private collection, England)3 painted on the reverse of Mortimer’s own self-portrait, created roughly fifteen years earlier, remains unclear. However, it may not be a coincidence that 1774 was the year in which John Hamilton Mortimer was elected President of the Society of Artists, the rival exhibiting organisation to the Royal Academy, of which Reynolds was President. Despite the enmity between the two societies, Mortimer was a great admirer of Reynolds, who had himself been a student of Thomas Hudson. He dedicated a series of fifteen etchings to Reynolds in 1778 and was highly sensitive to the elder artist’s Discourses. Indeed, in his anonymously penned Candid Observations of the 1772 Society of Artists exhibition, which he co-authored with his friend Thomas Jones, Mortimer noted against exhibit no. 215, his own painting of Belisarius: ‘It appears evident here, the Painter has carefully read Sir Joshua Reynolds’s last lecture, and has perhaps too closely adhered to the Principles of the Bolognian School’.4

2 Another version of this painting, without the figure of Joseph Wilton, is in the National Portrait Gallery, London (NPG 234)

4 Candid Observations on the Principal Performances Now Exhibiting at the New Room of the Society of Artists, Near Exeter-Change, Intended as a Vade Mecum to that Exhibition, 1772, p.17.