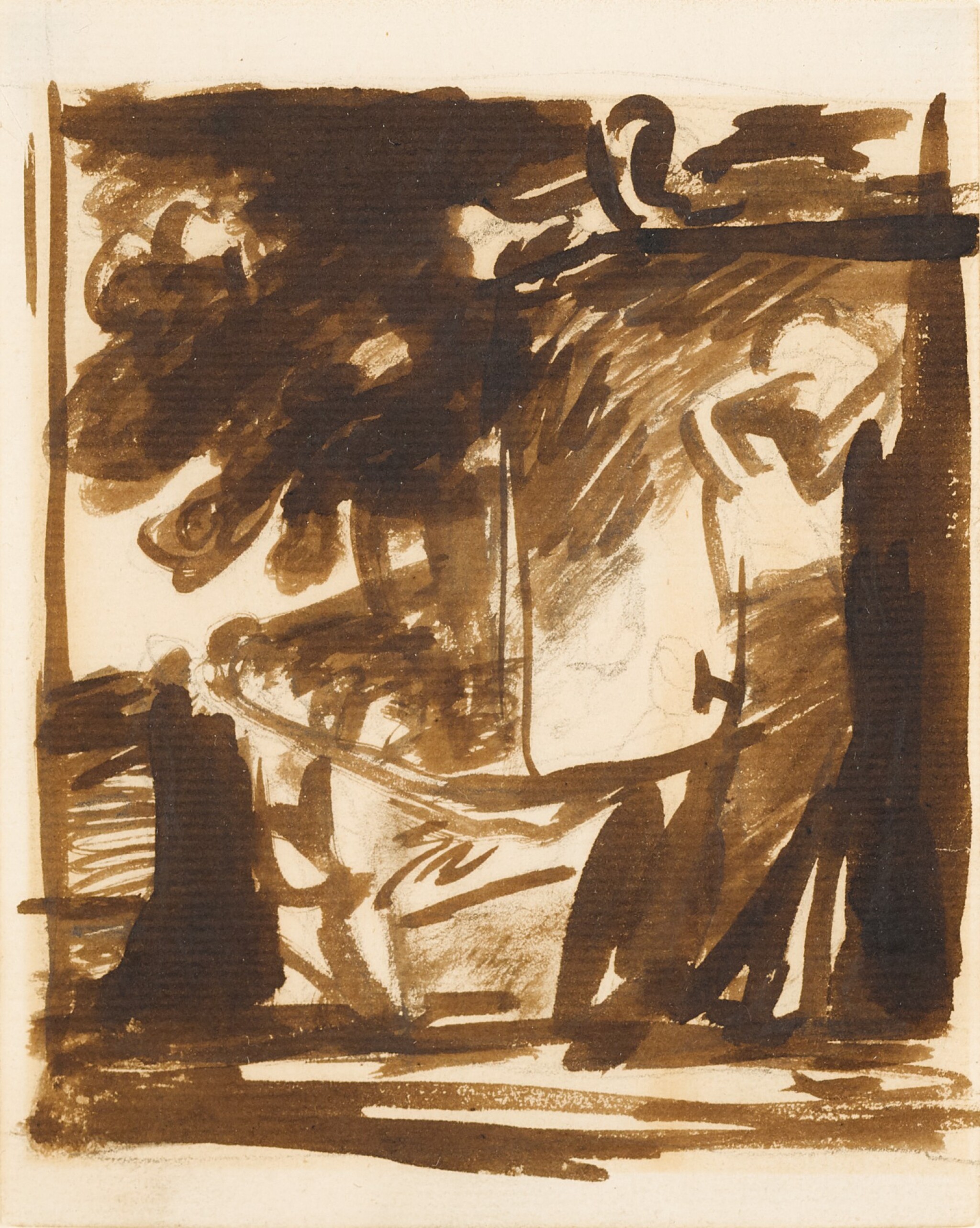 STUDY FOR THE LEVESON-GOWER CHILDREN

This work is in very fine condition. The pen and ink is particularly well preserved. The paper has darkened very slightly but this is not alarming and is only noticeable on close inspection.

"Romney is, I think, at his best as a draftsman. In this vigorous wash sketch – a preparatory study for his most celebrated group painting – he perfectly captures the fluidity and sense of movement that he is trying to convey in just a few rapid strokes of the brush. Beautifully framed and presented it is both art historically important and an extremely chic object – both things that are synonymous with Lowell and Jonny’s gallery. It would look very good on my desk!"

This powerful wash drawing is a preparatory sketch for Romney’s famous painting The Leveson-Gower Children (also known as The Gower Family), now in Abbot Hall Art Gallery, Kendal (fig. 1).1 Romney was a bold and incisive draughtsman who made numerous rich brown ink studies, principally for historical compositions; by contrast, comparatively few studies linked directly to his portraits survive. The existence of a significant group of studies for The Leveson-Gower Children underscores its importance to the artist. The sitters were the five youngest of the eight children of Granville Leveson-Gower, 2nd Earl Gower and later 1st Marquess of Stafford (1721-1803) who, at the time the portrait was commissioned, was President of the Council in Lord North’s government and one of the best-connected and most influential men in England. The eldest, Lady Anne, was the youngest of his children by his second wife, Lady Louisa Egerton, daughter of the Duke of Bridgewater – she later married Edward Vernon Harcourt, Archbishop of York, by whom she has twelve children; whilst the younger four are the children of his third marriage to Lady Susanna Stewart, daughter of the 6th Earl of Galloway – Ladies Georgina (later Countess of St Germans), Charlotte (later Duchess of Beaufort) and Susanna (later Countess of Harrowby), with their little brother Granville, who later became 1st Earl Granville. The present drawing, which is a large-scale treatment of the composition nearing its final form, perfectly distills Romney’s conception for the composition: the younger children dancing whilst their elder sister, in the guise of a Bacchante, plays the tambourine – stasis and movement in opposition, articulating the two sides of the family. The finished picture was painted in 1777 and the bold and dramatic handling of this study underline both the artistic confidence and classical grandeur Romney had gained during his recent trip to Italy between 1773 and 1775.

Romney’s sketches for the Leveson-Gower Children fall into three main groups: studies for the figure of Lady Anne, with experiment with the contrapposto of the figure and the position of the tambourine studies of the three younger girls; and studies for the whole composition that include extra figure of Granville, who seems to have been a late addition to the commission. The present drawing belongs to the this third group, other examples of which include the drawing formerly on loan to Abbot Hall Art Gallery and a large drawing in the Whitworth Art Gallery, University of Manchester.2 From the surviving drawings it seem clear that Romney had the concept for the painting clear in his mind from the beginning, and his numerous sketches for the work are more concerned with exploring variables within the design and fine tuning it.

Lord Gower’s commission offered Romney the opportunity explore the sort of complex multi-figural composition that the artist would have relished at this stage in his career – putting into practice the kind of ambitious classical quotations that his great rival Reynolds exploiting at that time; and, as Kidson has written, ‘synthesising some of the most profound impressions left upon him by his recent visit to Italy: the paintings of Poussin, the funerary monuments of Rome, and the witnessing of rings of dancing girls at Nice.’ As Romney wrote in his travel diary, the latter caused him to imagine he ‘was removed a thousand years back & a spectator of the scenes of Arcadia’ and recalled in his mind the interlocking dancing maidens in Guido Reni’s famous painting Aurora, a celebrated fresco on the ceiling of the Casino at Palazzo Pallavicini-Rospigliosi, in Rome.3

This virtuoso wash drawing, with its bold, almost abstract, forms and incisive draftsmanship, demonstrate Romney’s ability to conceive and formulate such a powerful and complex composition on the page, drawing together myriad influences to create a highly sophisticated, elegant and rhythmically balanced design. Executed with rich brown ink, this sheet is one of the boldest and most spectacular of Romney’s surviving portrait drawings.