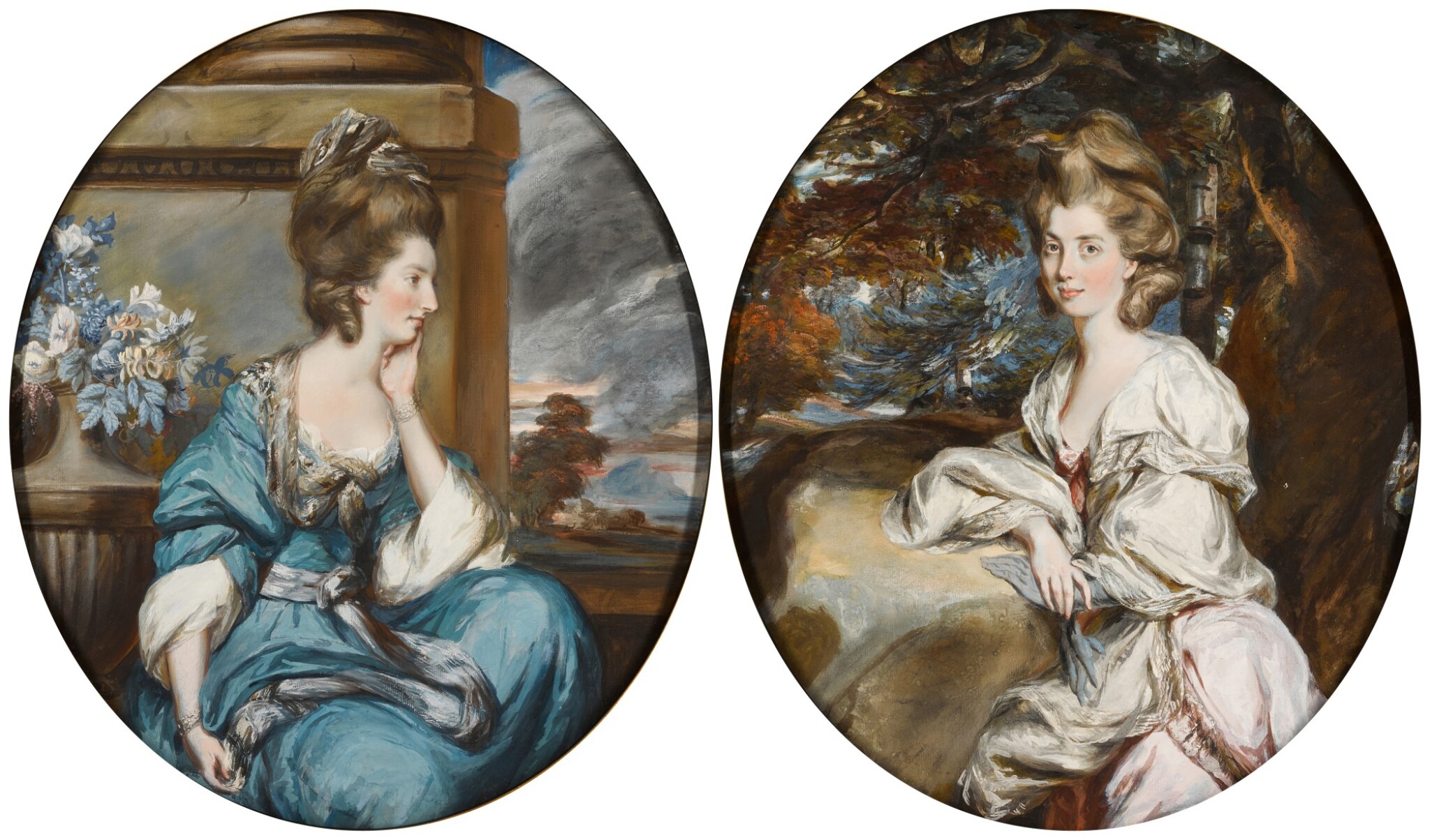 a pair, both pastel and gouache on paper, laid on canvas, on their original backboards, oval

"Over many years and many art fairs, Lowell and Jonny have built an established international reputation for three things – elegant presentation; excellence of condition; and discovering lost British masterpieces. This pair of extremely stylish portraits by Gardner, in exceptionally well-preserved state and beautifully framed, encapsulate all three and epitomise the refined taste for which the gallery is known around the world."

This striking, recently rediscovered pair of portraits of Anna Maria, suo jure 9th Baroness Forrester and her sister, the Hon Mary Shuttleworth, show Daniel Gardner at the height of his powers as a portraitist. The sitters were the daughters of the Hon. Caroline Baillie, Baroness Forrester and her husband Capt. George Cockburn RN of Ormiston, East Lothian who was Comptroller of the Navy from 1756 until 1770. Their mother was the daughter of George Forrester, 5th Baron Forrester (1688-1727), a military office who served with distinction under the Duke of Marlborough. The portraits seem likely to have been executed in 1776, the year Mary Cockburn married the Rev. Charles Shuttleworth of Aston in Derbyshire. Her elder sister, Anna Maria, became the 9th Baroness Forrester on the death of their mother, but died without issue. Gardner’s portraiture occupies an unusual position within the history of British painting during the eighteenth century. By the late 1770s, Gardner was one of the most successful and prolific painters in London having created a hugely popular portrait formula; reproducing in pastel on a reduced-scale the fashionable poses and conceits of full-sized works by Sir Joshua Reynolds and George Romney. Conversely, unlike the masters he imitated, Gardner’s success was achieved without the use of London’s exhibiting societies: he showed only one picture at the Royal Academy and never submitted a work to the Society of Artists. As a result Gardner has received comparatively little scholarly attention, although the range, importance and number of his sitters suggests that he was a significant member of the wider artistic community and his beautifully executed and engaging portraits are a fascinating testament to the success and adaptability of ‘Grand Manner’ portraiture.1 All these elements are visible in the present hugely accomplished and finely handled portraits.

Gardner was born in Kendal in Cumbria and after leaving school worked with George Romney. Romney himself had left Kendal for London in 1762, and Gardner followed in either 1767 or 1768, living initially at 11 Cockspur Street, very close to the Royal Academy Schools in Pall Mall which he joined in 1770.2 On leaving the schools, he joined Joshua Reynolds's studio as an assistant in exchange for further tuition. Gardner was therefore working for Reynolds at the moment he was experimenting with his grandest and most impressive exhibition portraits. Shortly after establishing his own practice, Gardner began to produce works in pastel which closely followed the fashions established by his former master, simply replicating poses and compositions on a more domestic scale. The present portraits perfectly illustrate Gardner’s working method. Mary Shuttleworth is shown with her hand resting on her chin, dressed in loose classical costume, in a pose which is modelled on Reynolds’s full-length portrait of Mary, Duchess of Ancaster now at Houghton Hall, Norfolk. The addition of an urn and still life of flowers adds to the decorative quality of the composition.

Gardner developed a novel technique using pastel to approximate the appearance of oil. By combining pure pastel with a liquid vehicle he was able to create a range of textures, from the soft rendering of features and hair, to the more broadly handled landscape of Lady Forrester.3 In the present work the areas of greatest opacity, such as the costumes, are created using Gardner’s distinctive technique. The domestic scale of his works, their charm and sweetness meant he was frequently commissioned to paint family groups and children. The present pair are an extremely fine example of Gardner’s technique and manner, perfectly illustrating why he was such a successful artist. It was this clever distillation of Reynolds and Romney’s style into a domestic scale which made Gardner extremely popular with American collectors of the early twentieth century.

1 Gardner was the subject of an exhibition at Kenwood House: Helen Kapp, Daniel Gardner 1750 – 1805, exh. cat. London (Kenwoood House), 1972 and a book: George Williamson, Daniel Gardner, London, 1921. But comparatively little has been written about him subsequently and he is omitted from standard accounts of eighteenth-century British art.