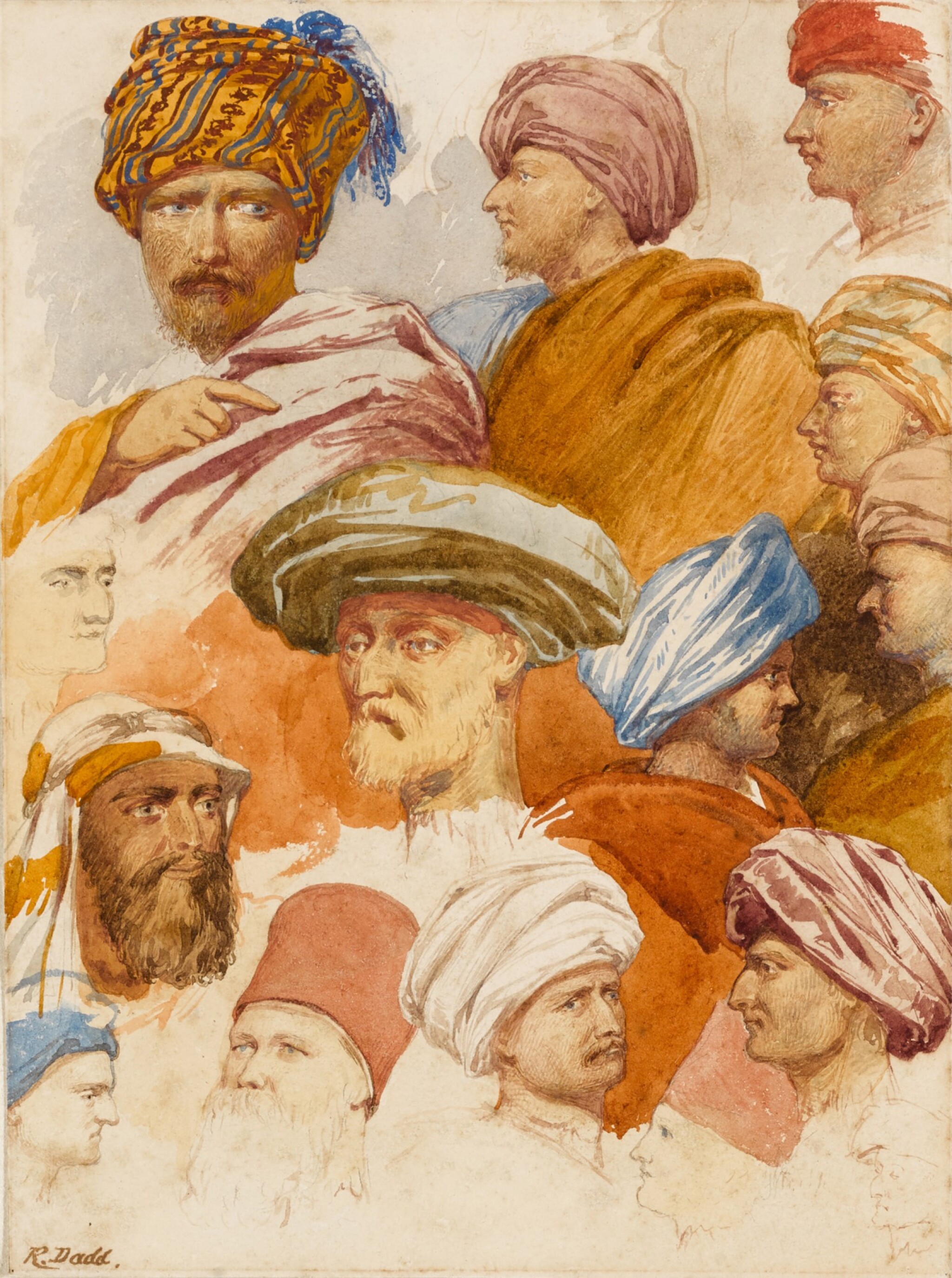 Watercolour over pencil on paper

The artist’s sheet has been fully laid onto a sheet of cardboard thus preventing inspection of the back. The sheet is somewhat undulated. Colours are bright and well preserved.

"Richard Dadd’s Study of Middle-Eastern Heads is a beautiful record of the genius of an tragic artist whose life was about to fall from a mental precipice into insanity, patricide and incarceration. Probably painted in Egypt in 1842, the fateful year that he believed himself to be the god Osiris pursued by devils. The watercolour shows that despite his growing paranoia of those around him he was still capable of producing highly insightful and sensitive studies of humanity. Rarely do we see visual evidence of a man’s struggle between the real world and the one his imagination created and which ultimately destroyed him."

Dadd began drawing when he was about 13, and it seems likely that he learnt the technique of miniature painting during his formative years. In 1837 he entered the Royal Academy Schools, London and was regarded as one of the most promising young artists of his generation. His first submission to the Royal Academy in London dates from 1838, when he exhibited his painting Line Fishing, and also exhibited in 1839, 1840 and 1841.

In 1842 he left England with Sir Thomas Phillips (1801–67), a solicitor and former mayor of Newport, South Wales, accompanying him through Europe and the Middle East to make drawings and record their travels. A sketchbook (London, V&A) surviving from this journey shows the quality of his draughtsmanship. Its pages are crammed with tiny, vivid and meticulously drawn images of heads, figures, boats, landscapes and architecture. Whilst in Egypt he had become suspicious and unpredictable, occasionally bizarre and violent in his behaviour, believing that he was persecuted by devils and that he was under the power of the Egyptian god Osiris. This state of mind was to last the rest of his life.

Dadd returned from this journey in spring 1843 showing unmistakable signs of insanity. In August of that year, having become convinced that his father was the Devil in disguise, Dadd killed him with a knife and fled to France. En route to Paris, Dadd attempted to kill another tourist with a razor but was overpowered and arrested by police. Dadd confessed to killing his father and was returned to England, where in 1844 he was committed to the state criminal lunatic asylum, which was then part of Bethlam Hospital, London. In 1864 he was transferred to the newly built criminal lunatic asylum at Broadmoor (near Crowthorne, Berks), where he died of consumption. He continued to paint throughout nearly 42 years of confinement.

The present sheet, which combines crisp drawing with finely controlled washes of colour and bold strokes of shadow, is a beautiful example of Dadd’s talent. His mastery of the medium and his meticulous attention to detail is obvious, as on the fascinating collection of pages from one of Dadd’s middle-eastern sketchbooks, now in the Victoria and Albert Museum.