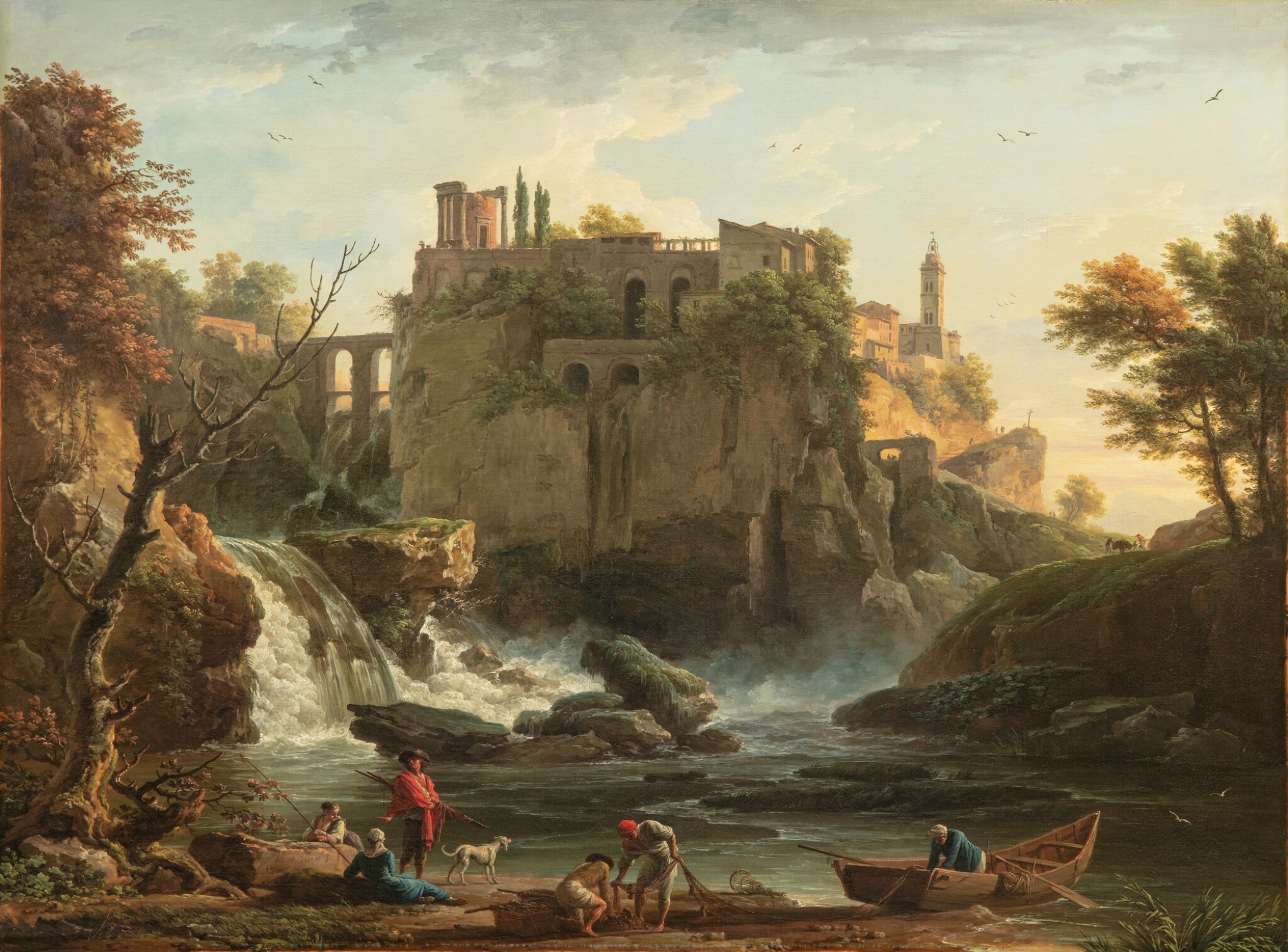 Translated from the French condition report made by Isabelle Leegenhoek, external restorer :

The painting is unlined, and on its original key stretcher.

The canvas is in a very good condition.

A tiny trace on the reverse, on the left, can be seen, due to a light snipping of the canvas.

The paint layer is in very good condition and covered by a yellow uniform varnish layer.

We can notice some minor accidents, especially along the right edge in the sky, or in the water on the right of the boat, due to the trace on the reverse.

The varnish fluoresces. We can notice the minor retouchings mentioned above, more or less visible.

The paint layer is thin and transparent, laid on a clear ground visible on the four edges which are not painted.

To conclude, this painting is in excellent condition.

Offered with a gilt wood frame.

Please note that Sotheby's does not guarantee the condition of the frame.

Where acquired for 5 820 francs by Ferréol Bonnemaison for Armand Séguin;

Where acquired for 3 150 francs by Monsieur Hazard;

L. Lagrange, Joseph Vernet et la peinture au XVIIIème siècle, with the texts from the Livres de raison and some other unpublished documents, Paris 1864, pp. 325, 361 and 475;

Joseph Vernet painted View of Tivoli when he returned to France in 1753, after spending more than twenty years in Italy. This is one of the artist’s masterpieces, from his best period. Called back to France by the Crown to paint his foremost work, the Ports of France series, Vernet pays tribute in this ambitious and poetic landscape to the Italy he loved and to which he would never return.

Few paintings of this stature by Vernet have appeared on the art market or at auction in recent years.

Joseph Vernet needs no introduction. He is uncontestably the greatest landscape painter of his generation, and even of the whole eighteenth century. His contemporaries recognised him as such and his reputation has not diminished over time. With his trailblazing vision of nature, he created a bridge between the great masters of classical landscape, Poussin and Claude Lorrain, and the Romanticism that was to come.

Born in 1714 in Avignon, he initially trained locally with the painter Philippe Sauvan (1697-1792) then probably in the studio of Jacques Viali (circa 1650-1745) in Aix-en-Provence. His talent was soon spotted by the Marquis de Caumont, who sponsored him to continue his studies in Italy, where he arrived in November 1734. He remained for nearly two decades, completing his training with Adrien Manglard (1695-1760) and finding inspiration in the examples of Claude Lorrain and Salvator Rosa.

Success came to him quickly and he found a select and wealthy clientele among the British aristocrats who were undertaking the Grand Tour as well as members of the French nobility who had settled in the Eternal City. These clients helped his reputation to grow rapidly beyond the borders of Italy. When he returned to France in 1753, the Crown tasked him with making a series of paintings of French ports: this was his most prestigious commission and it took him nearly fifteen years to complete, while simultaneously pursuing a brilliant career that had both official (he was received into the Académie de Peinture et de Sculpture in 1753) and commercial strands.

Vernet became the reference point throughout Europe for landscape and marine painting. Until his death in 1789, he continued to paint these wonderful landscapes, which were snapped up by wealthy European collectors.

This View of Tivoli is without question one of the most striking examples of his mature work and was painted when he was at the peak of his career, in 1753. This year was a decisive moment in the artist’s life and career, which no doubt partly explains its very high quality and its importance.

1753 was the year that Vernet found his maturity: it was the year his father died and the year he returned to France after twenty years in Italy. It was also the time when his art reached its apogee, just before he received his most distinguished commission, for the Ports of France.

The commission for the present work is precisely documented, since Vernet recorded it himself in his book of accounts, where his commissions are listed: under no. 47 he describes a painting four pieds wide (the width of the present painting) made for ‘M. Regni’, who paid 90 livres for it. Vernet in fact made the painting for François Régny (1706-1779), who was originally from Lyon and became consul of Genoa in 1756 (fig. 1).

Régny’s painting was later engraved by Pietro Martini (1738-1797) in the 1770s (see L. Lagrange, op. cit., p. 475), together with its pendant. The two engravings were given imagined titles: View of Spoleto for the present work (fig. 2) and View of Porto Ercole for the pendant.

The two paintings subsequently entered the collection of M. Leboeuf, who sold them in 1783 for the very good price of 12,000 livres. They were then added to the collection of François-Antoine Robit and later to the even more distinguished collection of the Duc de Berry. The two pendant paintings were separated in 1837, when the duke sold part of his collection. The second painting has not since resurfaced.

There are few sites that have been depicted at a given time as often as Tivoli was by the artists of the eighteenth century. Around thirty kilometres from Rome, it combined in one place many elements that appealed to landscape painters: a craggy, picturesque panorama, with a village perched at the top of high cliffs, two dramatic waterfalls (the Grand Cascade and the lesser Cascatelle), as well as some memorable Roman ruins, the Maecenas Villa, and the celebrated rotunda Temple of Vesta, situated at the edge of the precipice.

The spectacular character of the ensemble was certainly not lost on Joseph Vernet, who from 1737 returned to Tivoli many times to paint or draw the scenery. His usual practice was to use all the works he produced on site as visual points of reference when he returned to his studio to paint a large canvas of Tivoli. He revisited the subject many times, certainly as a result of commissions from his clients, but probably also because of his own personal preference. There is no doubt whatsoever that the present View of Tivoli is one of the most accomplished and original of these paintings.

Vernet chose to take a step back from the topographic reality of the place, in order to render the picturesque and sublime qualities of the site on the smaller space offered by the canvas. Bringing together various elements that are geographically further apart in reality, Vernet gave himself great freedom and poetic licence, creating an ambitious harmony between topographical accuracy and his monumental vision of nature.

He went further, choosing to create an imaginary location out of two separate places: Tivoli, which dominates in this composition, but also the city of Spoleto, from which he seems to have borrowed some elements that would enhance the picturesque qualities of his vision, including the Ponte delle Torri on the left and the wide access ramp to the village on the right. These minor borrowings explain why, when Pietro Martini made an engraving of Vernet’s painting some decades later, he called it View of Spoleto rather than View of Tivoli, the title which – despite the engraving – Vernet’s painting was always given in early literature.

The idyllic atmosphere that reigns in this work is intensified by the painter’s incomparable pictorial technique and his masterly ability to render elements of nature – above all the water, from the turbulent cascade to the calmer waters in the foreground, as well as the magnificent detail of the rising mist at the foot of the cliffs, but also the sky, with its subtle rendering of the different colours and nuances of the setting sun. Strangely, it was sometimes thought that the painting showed a morning scene (notably in the 1783 sale). But the warm colours and pink tones in the sky on the right, casting a gentle, slightly tawny light over the town, leave no room for doubt. Further evidence is provided by the fishermen in the foreground, bringing in their nets, their basket full of the day’s catch. This is certainly an evening scene.

Using his freedom as a painter to transform the setting, Vernet has created one of the most magnificent compositions of his repertory, both powerful and delicate, realistic and original. The artist is inviting us to join him on a stroll, to visit his painting as though visiting the landscape itself. As we gaze upon this view of Tivoli, we are transported into the idyllic Italy that Vernet loved so much – an Italy reimagined by the artist and idealised through his vision. The year is 1753, when Vernet left the country never to return. Did he have a hunch that he would never go back while he was painting this work? It is certainly true that it is one of first he painted after his return to France: it suggests a splendid farewell and an astonishing tribute to the country he loved so deeply, the source of so much of his inspiration.