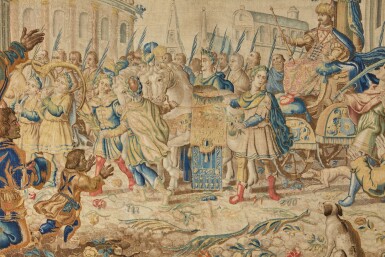 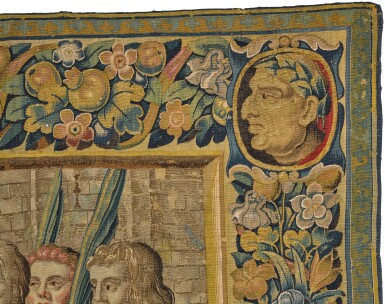 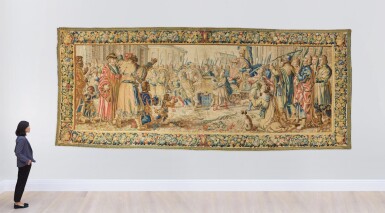 depicting a procession with a victorious procession, with a young dignitary, with moustache and beard, in a long tunic and turban, holding a baton, seated in a golden chariot drawn by three white horses with laurel wreathed attendants, escorted by musicians and procession of figures carrying palms, many onlookers including children and a dog, and strewn flowers and palms in the foreground, with distinctive (unidentified) buildings in the background, all within a four-sided floral and fruiting border with scrolling ribbon, and intermittent bands with husk mask, each corner with a roundel enclosing a laurel wreathed classical Caesar’s profile, with a narrow yellow and green reciprocal trefoil outer border, with further yellow and royal blue outer edge, lacking outer selvedges

Overall measurements: 563cm across the top, 564cm along the bottom, 228cm along left side, 230cm along right side,

Overall very good colour and condition for age. Some oxidization to the browns, commensurate with colour and age of dye. There are areas therefore that have been replaced by a brown which is a terracotta tan colour, see for example around the figures in the front left foreground. There is an area of later weave along the centre of the lower edge of the main panel, above the centre of the lower border, of stones and gravel, visible as a lighter colour. Overall stunning colours and weaving details. Dramatic and very decorative tapestry.

Records show that in the 16th and 17th centuries, Flemish artisans including weavers, migrated to the Northern Netherlands in large numbers to avoid the increasingly problematic political, economic and religious issues, and this acted as a stimulus to art in this area never seen before or since. Flemish tapestry designers, entrepreneurs, workman in the tapestry industry, moved into Holland and Zeeland. In adapting the different approaches of weaving in Flanders to those in the Northern Netherlands (where they were always private enterprises), in time not only did the weavings take on a cultural identity of their new society, but those born in the Netherlands took to designing in their own styles, with strong influence from the Flemish tradition. Allocating specific designers and weavers is not always possible, due to the lack of the names recorded or woven into the pieces, and the mixed influences in the designs. With the strong influences and links with Flanders, some tapestries could have been woven in the Flemish centres and traded in the Northern Netherlands. Flemish artisans from the various distinct weaving centres (Oudenaarde, Brussels, Antwerp and others) moved to the northern cities such as Gouda, Schoonhoven, Delft, Middelburg, Leiden, Haarlem and Amsterdam, and some records have been researched more than others. Even the records of names of some weavers, do not reveal the work the completed, and without signed weavings or drawings the designers cannot be identified and attributed to known weavings.

The most well known Northern Netherlands weaver of this time being Francois Spiering (1549/51 – 1631), from Antwerp and based in Delft, who signed his work, and the designers and workshop owners Karel van Mander I (1548-1606) and his son Karel van Mander II (1597-1623). By the mid 17th century the second generation of Flemish weavers were established, including Maximiliaen van der Gucht (Delft born of Flemish parents). These weavers along with others received important commissions from the Danish and Swedish royal families. Later weavers such as Oudenaarde originated, Pieter de Cracht (c. 1600 – after 1658) has studios in Amsterdam, Gouda and Schoonhoven, and by the end of the century, Alexander Baert (c. 1696 – after 1759), has workshops in Amsterdam and Gouda. Tobias Schaep (1568-1649), Oudenaarde born, and Gouda based, is well known for his impressive, signed, series of The Life of Christ.

The subjects matter for the designs of the tapestries, were varied, being historical (including Biblical, mythological, Classical themes, Epic romances and national historical event and battles) along with contemporary events, landscapes and hunting scenes, and table coverings and panels with specifically predominantly floral themes. The tapestry series were woven for the town councils and other rulers and related themes which testified to their aspirations in representing just rulers, many being from the Classical stories, such as the Story of Antony and Cleopatra, and the other heroes, including Alexander the Great, Darius, Dido and Scipio, many of which are associated with Triumphal processions.

Dutch history paintings came to the forefront in importance in the 17th century, and the tapestry weavers took up the same themes, albeit with preferences for different subjects to the paintings. Large numbers of the tapestries were biblical scenes, with Protestant rather than Catholic iconography. They included the Old Testament stories of Abraham, Joshua, Rebecca and David in particular, and New Testament subjects of the Life of Christ.

Importantly for consideration of possible Northern Netherlands weavings, there was a balance between the Flemish artistic tradition and the new Northern Netherlands style. Tapestry designs were inspired by the Flemish works, but the cartoons and final weavings reveal a Dutch interpretation. For example the weavings of Tobias Schaep, show the influence of the Italian master, Caravaggio’s, use of light and shadow, although the large figures are less dynamic in their representation.

There are two especially important Dutch tapestries of the Golden Age, which are interesting to consider when reviewing the present panel, and they reveal the artistic and cultural connections between Flanders and Holland, the traditional and the contemporary interpretations. They are companion pieces from the Old Testament biblical subject, The Story of David, woven in wool and silk, circa 1610-1620, Delft, workshop of Francois Spiering, after designs by David Vinckboons, both of unusually wide proportions, within the same border type, signed in the selvedge, one depicting, The Meeting of David and Abigail, 211cm by 627cm, (Rijksmuseum, Amsterdam, Inv. BK 16523) and The Triumph of David over Goliath, 211cm by 767cm (Franses Gallery, London). The Story of David, was very influential, as King David was anointed by the prophet Samuel, had the gift of prophecy and repented after he has sinned, was a brave warrior, just ruler and statesman. He was important in Christian art through the Book of Matthew, for not being a prefiguration of Christ, but being a direct ancestor. It was one of the most popular series woven in Brussels in the first half 16th century, having been a subject used from the 14th century, and continued to be a prestigious subject for commissions. The designer of these two large David tapestries, David Vinckboons, is recorded as having completed two drawings of the same large proportions, showing The magnanimity of Scipio, and The meeting of Consul Quintus Fabius Maximus and his father Quintus Fabius Maximus, again both classical heroes. It is the allusions and symbolism from the traditional subjects that provide the authority and inspiration for the Dutch to succeed and prosper as a commercial nation, against the influence of the Spanish monarchy. The tapestry series of this period incorporate classical dress along with the contemporary, strengthening the association with the symbolism of the past for inspiration in the present. With private Dutch tapestry workshops, commissions for subjects could be varied and in line with what specific individual patrons required. There was a greater freedom in these workshops, often set up in old religious buildings are encouraged by the councils to promote the cities new vibrant industries.

The classical triumphal procession depicted in the present tapestry, could be interpreted as a victorious commercial procession. There has been speculation that the scene could represent the arrival of the Russian embassy envoys sent on behalf of Tsar Aleksey Mikhailovich (b.1629, r.1645-1676) into Venice in 1656, 1663, 1667 and 1667, with the objective of improving trading terms, obtaining military co-operation against the Turks, and receiving recognition of the Tsar as a leading European sovereign. There was never an alliance between Venice and Russia in Tsar Alexsey’s lifetime. The Dutch involvement was as very successful commercial intermediaries, transporting goods between Venice and Moscow (an influence that the Venetians and Moscovites wanted to eliminate), and Dutch ships were also involved in transporting the 1656 envoy by sea, at some peril, to Venice.

The depicting of figures that could be in contemporary Russian clothing, including the dignitary in the chariot, wearing appropriate silk robes and a turban. Perhaps the triumphal procession into Rome, could be representative of the aspirations of the Moscovites to form an alliance with the Christian powers and succeed against the Turks. The tapestry could have been woven in the third quarter 17th century in a workshop in one of the Northern Netherlands weaving centres, although it would have been a very specific commission if this subject matter. The composition fills the criteria of representing traditional themes with an indication of contemporary historical references.

It is not clear which designer or weaving workshop was involved in the production of the present panel, but there are similarities in the design composition, including the colours, use of classical with contemporary dress, the sense of shadows used in the side groupings, proportions and physiognomy of the figures, and the distinctive flowers used in the foreground of the tapestry, to justify considering that the tapestry was of Dutch manufacture, with Flemish influences, and revealing a combinations of sensibilities to present a new Northern Netherlands style with strong traditional Flemish sources for inspiration.

For comprehensive discussion of the importance of these two historical tapestries, and the parallels of the Biblical subject to the contemporary Dutch republic, see the insightful exhibition catalogue, Dutch Tapestry in the Golden Age: 1590-1650, Baroque Masterpieces from the Northern Netherlands, Exhibition 19th October – 14th December 2007, Franses Gallery, New York, pp.34-43.

Hartkamp–Jonxis, Ebeltje, Flemish tapestry weavers and designers in the Northern Netherlands, Flemish Tapestry Weavers Abroad, Emigration and the Founding of Manufactories in Europe, Leuven University Press, 2002, pp.15-41, for comprehensive discussion of the emergence of the Dutch tapestry weaving industry.

Longworth, Philip, Russian-Venetian Relations in the Reign of Tsar Aleksey Mikhailovich, The Slavonic and East European Review, Vol. 64, No. 3 (Jul., 1986), pp. 380-400 Published by the Modern Humanities Research Association and University College London, School of Slavonic and East European Studies, for detailed discussion and mention of the Dutch involvement, pp.382, 385, 387-388.