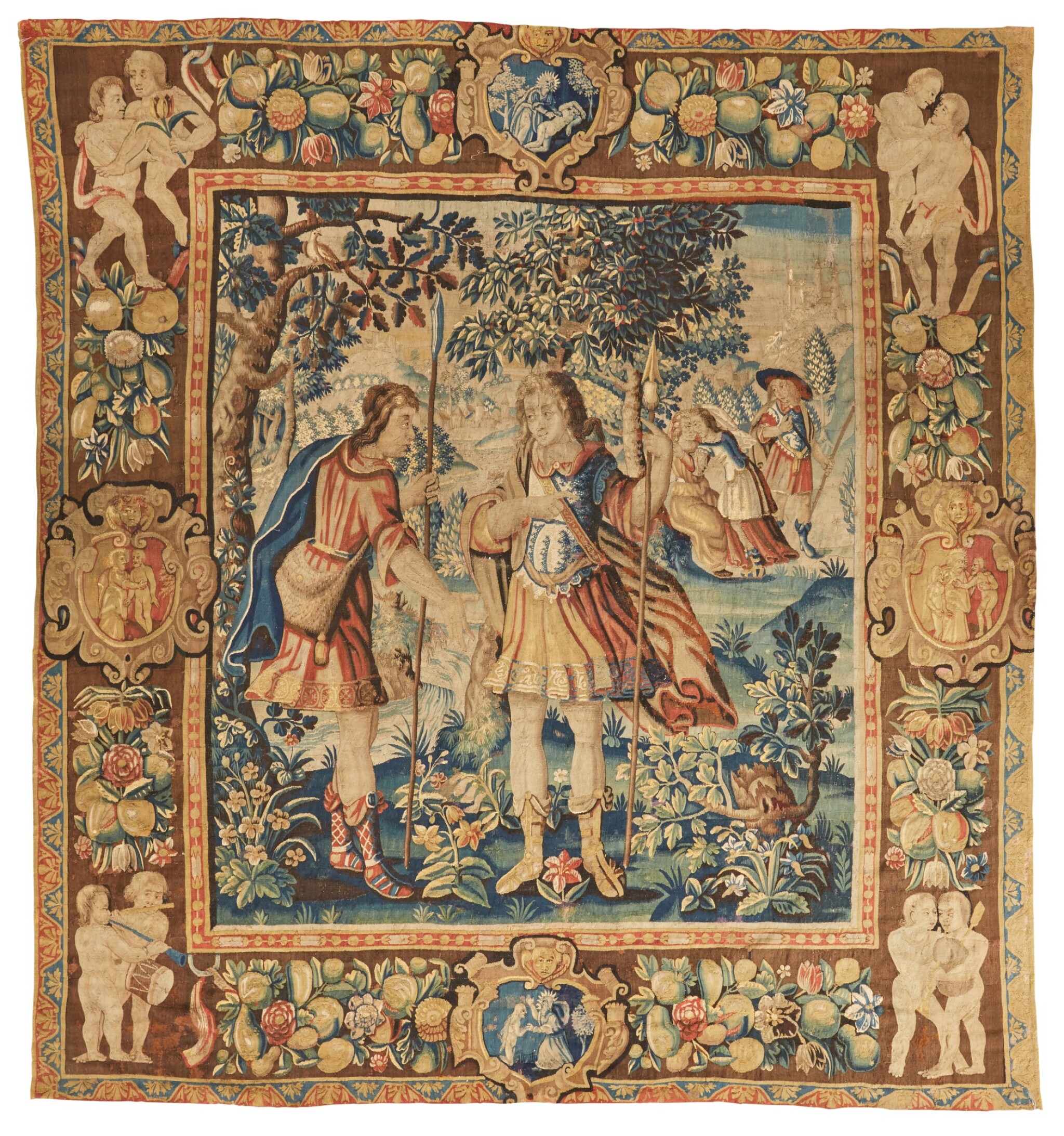 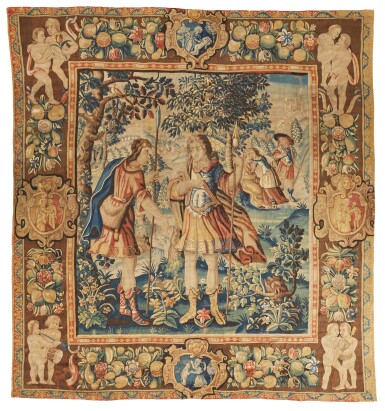 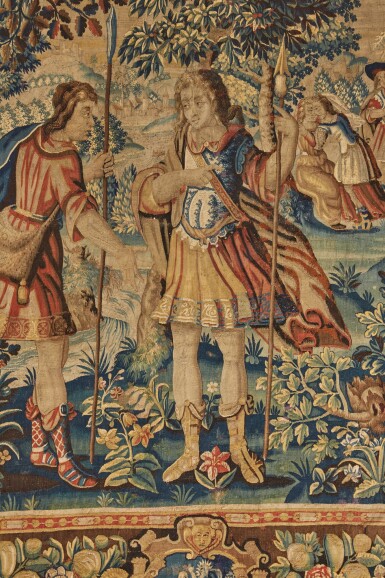 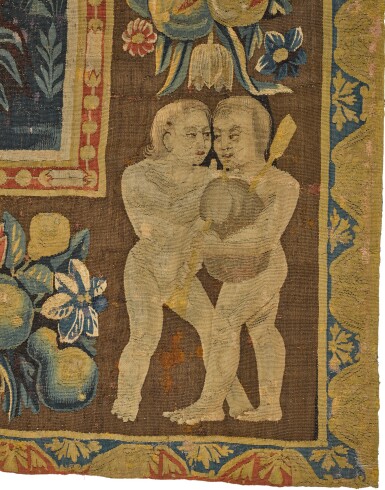 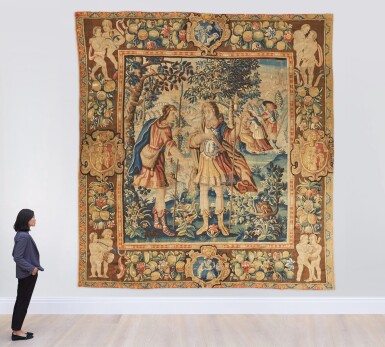 Woven with shepherd and another male figure in the foreground of a landscape setting, with a group of two women and a man in the background, within an elaborate deep four-sided border, the centres with cartouches enclosing biblical scenes of the expulsion of Adam and Eve from the garden of Eden, flanked by groups of flowers, and each corner with a pair of frolicking boys

Overall measurements 302cm across the top, 300cm across the bottom, 323cm along left side, 320cm along right side

Overall stable condition. It would benefit from a professional clean. Balanced composition and colour overall. Some fading to colours, as expected where they are light in tone, for example bodies including faces.

There are more repairs to the border than to the main tapestry composition, For example there are some repairs and changes in the corners to the motif of the two figures, and there is a horizontal join in the lower right hand corner of the vertical border. Perhaps the corners are altered and later interpretations of original putti in the corners. There are some repairs in areas to the brown ground of the border and to the architectural surrounds of the cartouches, visible as a terracotta colour. Some of the highlights to the faces, for example to the figures in the corners, so as to add definition to faded areas. Tapestry is lined on the reverse, with a sleeve for a batten. Recommended that Velcro should be added for hanging purposes in the future.

With the clear presentation of a shepherd, it is likely to be from a pastoral story, and therefore possibly from the influential and well known ‘Story of l’Astree and Celadon’. The pastoral novel L'Astrée by the French author, Honore d’Urfe (1568-1625), published between 1607 and 1627, translated into various languages and the story was taken up straight away as a subject for tapestries, of which signed weavings are recorded by the Bruges weaver, Jan Permentier. The publication was very influential and resulting tapestries were very popular. It followed on the success of the other successful literary tapestry series, of The Story of Gombaut and Macee, with the theme of the pastoral exploits of the young, and in particular of a shepherd and shepherdess. The tapestry designs of this series being of many smaller figures, often with the archaic approach of labelling, and of the known drawings and tapestries, there is not a grouping which matches with the present composition.

The pastoral tale of L’Astree could be considered. The story is long and immensely complex, but the main storyline is the romance between a shepherd, Celadon, and shepherdess, Astree, set in 5th century Gaul, and their tale meanders through the adventures and various digressions of the other characters involved, and thereby relating to the world in which they all live. It combines with themes of the fall of the Roman Empire and the emergence of France following the reunion of the Gallic tribes. It approaches Neoplatonic values and Celtic theology, and has Counter-Reformation ambitions and an open minded attitude to personal relationships. There were 300 characters in the story, and although only key episodes and characters were generally chosen for tapestry series, it not clear which characters are shown in the present panel, and if indeed they are from this particular pastoral. The moralising themes to be considered in the pastoral life are enforced by the biblical scenes in the vignettes, showing the results of temptation and the ultimate expulsion of Adam and Eve from the garden of Eden,

For discussion of the literary series, see G. Delmarcel & E. Duverger, Bruges et la Tapisserie, Bruges, 1987, Histoire d’Astree, Nos.46-51, pp.376-398. In addition for similar compartmentalised motif border types, and other border designs with putti in the corners (of which a variation has been included in the present panel), as seen in other Bruges weavings such as those of the series, The Life of Charles V, op.cit., Nos.44-45, pp.364-375. For an interesting comparable panel from the series depicting ‘Celadon walking with Leonide and Silvie, Bruges, circa 1640 (337 by 320cm), see G Delmarcel, Flemish Tapestries, London, 1999, Bruges tapestries in the seventeenth century, pp.268-277.