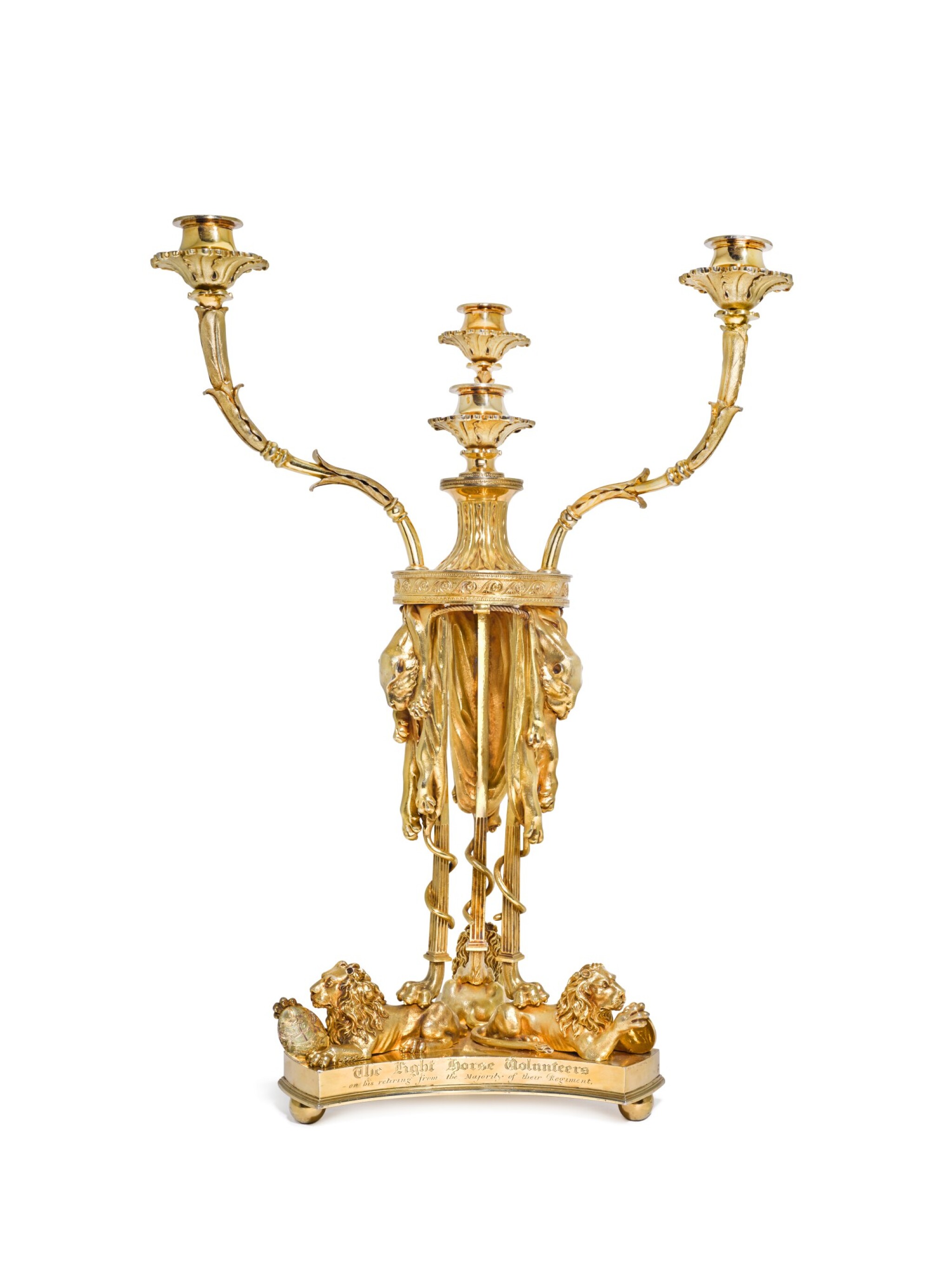 The inscription reads: 'To Hardinge Stracey Esq. / The Light Horse Volunteers / of London and Westminster / Voted at a general meeting of the Corps 5th June 1805. / on his retiring from the Majority of their Regiment / in Testimony of their lasting Esteem and in grateful acknowledgement of his services.'

The inscription reads: 'To Hardinge Stracey Esq. / The Light Horse Volunteers / of London and Westminster / Voted at a general meeting of the Corps 5th June 1805. / on his retiring from the Majority of their Regiment / in Testimony of their lasting Esteem and in grateful acknowledgement of his services.'

Hardinge Stracey (1734-1808) was the eldest child of Sir John Stracey, Kt. (1698-1749), Judge of the Sheriff's Court and Recorder of London, and his wife, Mary (1704-1742), daughter of the Rev. Gideon Hardinge (1668-1713), vicar of Kingston-upon-Thames, Surrey. Hardinge Stracey is said to have been educated at Cambridge University from which, two years after coming down, he was appointed confidential secretary to his maternal uncle, Nicholas Hardinge (1700-1758), Clerk of the House of Commons and Joint Secretary of the Treasury. Through the influence of his uncle, Stracey was for several years until 1789 Clerk of the Committee of Privileges and Elections in the House of Commons. On 1 August 1765 he was married to Sophia, one of the daughters of Stamp Brooksbank (1694-1756), a successful Turkey merchant, a member of the New England Company, an M.P. and one of the Governors off the Bank of England.

Early in 1799, Stracey, by then a Captain in the Light Horse Volunteers of London and Westminster was appointed a major in the same regiment. According to Lionel Ernest Buckell and Ernest John Absolon, 'The ''Light Horse Volunteers,'' as they were generally called, was composed entirely of men of wealth and position in London and Westminster and, as was to be expected, it was looked upon as a model of what a Mounted Volunteer Corps should be. Its members, in many cases, were instrumental in the formation and training of other Corps of Cavalry formed in different parts of the country, and it was not uncommon for such corps to copy, more or less closely, its uniform and equipment.' ('London and Westminster Light Horse Volunteers,' Journal of the Society for Army Historical Research, vol. 28, no. 116, Winter 1950, pp. 168-171)

By January 1804, when James Gilbert's 'Bugle Horn Calls . . . as are used in the dismounted troops of [the] London and Westminster Light Horse Volunteers' and was 'most humbly dedicated Major Hardinge Stracey,' he was commandant of the regiment. (British Library Music Collections b.137)

The last mention of Stracey before his retirement from his regiment is to be found in Standing Orders for The Light Horse Volunteers of London & Westminster, (London, 1805, pp. 236 and 237): 'Riflemen. Art[icle] II. The monthly report ordered to be made of the progress of every rifleman in firing at the target, will, it is presumed, create emulation, and promote the great object in view, of forming a complete body of marksmen. The corps is under infinite obligations to Major Stracey for his unwearied pains in superintending the erection of a shooting ground, which has not its equal, and for forming regulations well calculated to prevent accidents, which places of this nature are often liable to. No gentleman can be expected to shoot without practice. . . .'

Stracey's retirement from the Light Horse Volunteers about June 1805 was followed sometime the following year by the presentation, presumably at a private function, of this candelabrum, made by one of London's foremost firms of working goldsmiths. The latter, under the superintendence of Benjamin Smith (1764-1823) and his partner, Digby Scott (1753?-1816), were at this time chief manufacturers to Rundell, Bridge & Rundell, royal goldsmiths, at the Golden Salmon, 32 Ludgate Hill.

Hardinge Stracey died at the age of 73 on 26 September 1808 at his house, 31 Upper Harley Street, 'greatly regretted by all who had the pleasure of knowing him.' (Kentish Gazette, Canterbury, Friday, 30 September 1808, p. 4e) Although his will was proved on 5 October 1808, it was signed on 9 February 1802, with two codicils dated 28 May 1803 and 31 January 1804, before the presentation by the Lord Horse Volunteers' candelabrum. He bequeathed the bulk of his property to his wife, Sophia, including his 'Plate Linen China Prints Pictures . . . and also all the Jewells Watches Rings Trinketts and other ornaments of the person and Dress commonly worn by her . . .' (National Archives, Kew, PROB 11/1487) Mrs. Stracey died on 12 May 1827 but it is unclear from her will what happened to her late husband's plate and other valuables. (National Archives, Kew, PROB 11/1726)